Searching for truth in data from authoritarian regimes 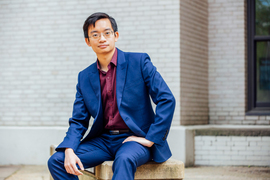 Like most scientists, Minh Trinh has long been preoccupied with trying to understand his surroundings. For Trinh, this curiosity has been directed at the most impactful, yet elusive, force in his early life — the one-party Vietnamese government. Under the Communist Party of Vietnam, many of the decisions that impacted Trinh’s life were made behind closed doors.

Moving from Hanoi to Singapore for high school and seeing two different one-party systems sparked his initial questions. Trinh then went on to pursue a BA from Harvard University, which would introduce him to the contrasting government of the U.S. Suddenly, Trinh saw how politics could have an enormous impact on human rights and well-being.

“Through my undergrad classes, I was introduced to many different international case studies. It helped me realize the need for action sometimes pushes people to settle for easy answers when searching for ways to improve the livelihoods of their fellow citizens,” Trinh says. “I grew very interested in first trying to figure out what is going on around us and how confident we can be about our knowledge.”

In 2015, after his junior year of college, Trinh took a gap year and worked at the Electoral Integrity Project in Sydney, Australia. The job required him to apply quantitative methods to analyze perceptions of electoral integrity. Over time, he became increasingly interested in working with data, and returned to Harvard to complete a dual BA and MA in statistics. “When I did my undergrad, we compared a few case studies that gave theoretical reasons for a certain outcome. The thing I didn’t find very fulfilling is that I never knew if A explicitly caused B,” explains Trinh.

“What attracts me to quantitative methods is that it allows you to establish a more principled way to deal with the confounding nature of relationships. That being said, quantitative data can not go without qualitative data, which provides the intuition for us understand what our numbers mean in real life.”

After completing his MA, Trinh was certain that he enjoyed academia, and decided to apply to PhD programs for political science. When he was accepted to multiple programs, he took his statistical skills and applied them to making a personal life decision: “I entered all the criteria I wanted [in a school] into a spreadsheet, scored them, and hid the averaged total to not bias myself until I had gone through them all,” he jokes. “The close-knit community and methodologically informed research made MIT come out on top.”

However, Trinh’s research has revealed a different story. “Instead of performance indicators encouraging better work, they have instead encouraged people to lie more,” explains Trinh. “This happens because provincial governments are being evaluated on the very data they collect. It leaves them with both the capacity and the incentive to misreport data.”

Through his calculations, Trinh has found that the total GDP reported by each province adds up to an amount far greater than the central government’s estimate. “The reports have been shown to be mathematically impossible. The top officials are looking below and know that someone must be lying, but they can’t tell which ones or by how much,” Trinh says. “Without statistics, they can’t hold provinces accountable and deliver a punishment or reward. The whole system of accountability no longer works.”

Provincial governments are tasked with running the elections and executing the central government’s goals. They must decide whether they want to keep electoral manipulation low on election day to accurately measure popularity, or manipulate results to ensure the centrally preferred candidate gets the job. “So, because the right task is no longer straightforward, the central government views the outcome as a more reliable signal,” says Trinh. “This creative method is not particularly efficient, but it is a way around the issue of misreporting.”

As he wraps up his dissertation, advised by Ford Professor of Political Science Lily Tsai, Trinh has concluded there are two major obstacles the Vietnamese government must overcome to achieve more accurate data collection. “First, the government must allow information to be collected by independent planners who can guarantee safety and transparency. Next, the government must show it can be accountable to its citizens and do good things with the information,” he says. “It’s a two-way street.”

Outside of his own research, Trinh is part of the MIT Governance Lab, an initiative to bridge the gap between citizens and government. The group focuses on creating discussions and activities that highlight the important ethical questions behind their work. Throughout his project, Trinh has relied on his weekly GOV/LAB discussions to guide his research. “With some findings, given the kind of regimes I research, it is not clear whether I should share them and help give the government more information. It might be used to punish people, which can be very problematic,” says Trinh. “These are questions we have to deal with all the time.”

While these ethical dilemmas may appear inconclusive, Trinh believes with enough data, there can be an answer. He hopes to continue in academia and pave the way for other researchers seeking to answer tough questions. “My dream is to be the person generating cutting-edge knowledge that changes the shape of what we know about politics,” says Trinh.

“In the social sciences, since there’s so many variables, there’s a tendency for people to dismiss things and say the answer can’t be found. That things are too subjective to be conclusive. But I believe there is a degree of universal truth and objective knowledge. If you have the right tools and push hard enough to get there — it’s possible.”

Fight or flight? Why individuals react as they do