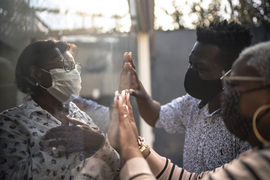 Caption:
MIT political scientist Evan Lieberman is co-author of a new paper showing mixed reactions when people are informed of the racial disparities in Covid-19 outcomes in the U.S.
Credits:
Image: iStockphoto

The Covid-19 pandemic, like many other health crises, has had unequal effects on the U.S. population, with communities of color often hit the hardest. A new study co-authored by an MIT professor identifies a related challenge: Different social groups have different reactions to the fact that Covid-19 has generated those health inequities.

More specifically, the study, based on a multilayered survey of U.S. residents, finds a divergence among racial groups when people are informed about the varying effects of the pandemic. Upon learning more about the social distribution of Covid-19, Black Americans tend to gain a better understanding of their risk. But among white Americans given the same information, there is a split response.

The study used “feeling thermometers,” on a scale from 0 to 100, to let participants rate their attitudes other racial groups. After learning more about health disparities, whites with “warmer” feelings toward Blacks favored a more vigorous public health response, while those with a “cooler” view of Blacks subsequently viewed Covid-19 as a less urgent problem and became less inclined to support strong public health measures.

“From a public health perspective, there is both good and bad news,” says MIT political scientist Evan Lieberman, co-author of a new paper detailing the study’s results. “For African Americans who were learning from this study that death rates were higher among African Americans, this increased their perception that they were at greater risk from Covid. … That’s good news because a big part of public health messaging is to make people aware of these dangers.”

Moreover, Lieberman adds, “A second piece of good news is that a large share of white Americans feel empathic or close to Black Americans.” And those fitting this description “became more invested in the notion that the government should do more on Covid.”

However, white participants who admitted to having colder feelings about Blacks became more reluctant to support extensive efforts to tackle the pandemic.

“We did find that those whites who had these cooler views toward African Americans, to the extent they were aware of these disparities in death rates, were more likely to perceive that this was not a problem that affected them, and wanted less aggressive action on Covid-19,” says Lieberman.

The paper, “How information about race-based health disparities affects policy preferences: Evidence from a survey experiment about the COVID-19 pandemic in the United States,” is published in the May issue of the journal Social Science and Medicine. The authors are Lieberman, who is the Total Professor of Political Science and Contemporary Africa at MIT; and Allison Harell, a professor of political science at the University of Québec at Montréal.

To conduct the study, the researchers conducted an online survey from August to September 2020, using the Qualtrics platform and working with the survey firm Dynata. The final sample is a demographically representative group of 3,961 adult Americans. The participants were asked a variety of questions, and responded to the “feeling thermometers” about other racial groups.

Some participants were then given information about the health disparities generated by Covid-19 — as of last summer, there were 2.5 times as many deaths per capita for Black Americans, compared to white Americans. Then respondents were asked a series of follow-up questions about Covid-19 risk, the government reaction, public health measures, personal liberties, and economic relief measures.

“It was telling that this share of participants, when they learned this information, became disinclined to have a public health response to Covid,” Lieberman says. “Whites who were cool toward Blacks at the start of the study were already relatively less inclined to support aggressive Covid policies. So, the overall effect of receiving the information was to further polarize attitudes on this important set of policies.”

Moreover, he says, the results are of a piece with other findings indicating that, for instance, white American men disproportionately do not want to get vaccinated.

“That’s a clear expression of a denial of the problem and a lack of interest in participating in what needs to be a coordinated effort to achieve herd immunity,” Lieberman says. “They’re not interested in a multiracial collective [solution], nor do they perceive themselves to be particularly vulnerable.”

Lieberman and Harell recognize their findings can seem vexing, since health officials place a premium on delivering facts to the public — and in this case, the facts can lead a portion of the population to become more indifferent to the problem. Still, Lieberman says, the research could help make public health messaging more effective.

“The best strategy would be some targeting in messaging,” Lieberman suggests. Communicating the facts about Covid-19 disparities usefully informed Black participants, after all, while for some others, he says, it may be necessary to attempt “more messaging that reminds us of the different ways we’re interconnected, in which we all lose out to the extent that this pandemic persists.”

Reformulating a certain amount of Covid-19 messaging may not be easy. Still, Lieberman says, even if policymakers “are uncomfortable with the notion that there might be any negative effects of disseminating true information, it’s fairly clear that’s an important reality.”

The study was supported, in part, by the Canadian Institute for Advanced Research.

Paper: “How information about race-based health disparities affects policy preferences: Evidence from a survey experiment about the COVID-19 pandemic in the United States”

Prof. Evan Lieberman speaks with Craig LeMoult of GBH about his new study, which finds there are mixed reactions when people are informed of the racial disparities in Covid-19 outcomes in the U.S. “We are so interconnected as a society - economically, socially, politically,” says Lieberman, “and [it’s important] to remind everyone that we are all potential vectors for this epidemic so it really behooves all of us to cooperate and to be able to end this pandemic as soon as possible.”