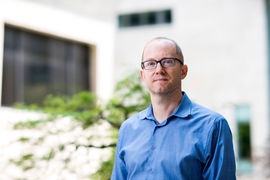 ↓ Download Image
Caption: “A big strand in my work has been to think about the important ways in which social identity, especially racial and ethnic identities, become really important in thinking about policies and justice in distributive issues,” MIT political scientist Evan Lieberman says. 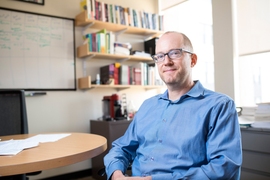 ↓ Download Image
Caption: “A big strand in my work has been to think about the important ways in which social identity, especially racial and ethnic identities, become really important in thinking about policies and justice in distributive issues,” MIT political scientist Evan Lieberman says.
Credits: Photo: Ian MacLellan

Caption:
“A big strand in my work has been to think about the important ways in which social identity, especially racial and ethnic identities, become really important in thinking about policies and justice in distributive issues,” MIT political scientist Evan Lieberman says.
Credits:
Photo: Ian MacLellan

Democracy, as the old saying goes, is not a spectator sport. But it may seem that way if you live in a country where the citizens, or some of them, are not used to engaging with the government.

MIT political scientist Evan Lieberman sees this first-hand when he conducts research in sub-Saharan Africa, a region he has been studying closely for a quarter-century now.

For instance: In the U.S., Lieberman observes, many parents of schoolchildren feel entitled to question local officials and ask what can be done to ensure their kids get a good education. Not so in some African countries.

“It doesn’t even occur to parents to ask difficult questions or think that what they say or do would have consequences,” Lieberman says.

So Lieberman, who joined the MIT faculty in 2014 as the Total Professor of Political Science and Contemporary Africa, has been designing research, such as a field experiment that he will pilot this summer in Tanzania, that also serves as an intervention of a kind. In it, trained facilitators help citizens to recognize that they can analyze evidence and participate in the workings of democracy.

“If you just provide information to citizens about what they can do, it’s really not enough to change things,” Lieberman says. Thus, bringing his own scholarly analysis to bear on such experimental results may also be having a tangible impact on the lives of citizens.

In his past books and current research alike, Lieberman is also mindful of the ethnic schisms that can inform government policy and leave some social groups as relatively passive spectators in their own states. Much of his work has involved South Africa as it made its historic transition from an apartheid-based regime to an inclusive democracy, although his current research is spread widely over the continent.

“A big strand in my work has been to think about the important ways in which social identity, especially racial and ethnic identities, become really important in thinking about policies and justice in distributive issues,” Lieberman says.

Lieberman’s career studying African politics stems in large part from his own educational experience. Growing up in Manhattan in the 1980s, Lieberman realized that the private high school he was attending had investments tied to South Africa, then mired in its apartheid regime. He wrote a piece about it for the school paper; the school subsequently divested its South African-linked holdings.

“It really made me excited about the idea that through sober research, if you write about something seriously, people will take you seriously and might do something based on what you did,” Lieberman says.

Lieberman studied politics at Princeton University, and his interest in South Africa was heightened due to a trip there with other students in the summer of 1991, after his junior year.

“It was one of these life-changing experiences, because it was such an exciting time, to watch a society going through transformation, after being the stereotype of evil in the world,” he recalls.

After spending a couple of post-graduation years working in consulting, Lieberman decided to commit to the academic life, receiving his PhD in political science from the University of California at Berkeley. His dissertation examined how tax regimes evolved in multiethnic states, using a comparative analysis of South Africa and Brazil.

“Tax systems are built up over very long periods of time,” Lieberman observes. “By the time Brazil and South Africa became democratic in the 1980s and 1990s, they inherited tax systems that were legacies of a century of state-building.” Yet South Africa’s tax system appeared to function better after apartheid than Brazil’s did after it shed its dictatorship in the mid-1980s.

Why? While there are, as Lieberman emphasizes, “lots of horrible legacies from institutionalized white supremacy,” an unexpected twist in South Africa’s post-apartheid rebuilding was that the firm control the regime once exerted over the state actually left some structures in place that newly-democratic South Africa could still use.

“Basically South Africa’s tax system was built under this racial exclusionary regime, where a white state was able to solicit taxes from white citizens to build a white South Africa,” Lieberman notes. “But the irony of the story is that post-apartheid South Africa actually benefitted from that, because once you have this efficient tax system, it becomes harder for wealthy people to not pay any more.”

Lieberman’s study of tax systems became his first book, “Race and Regionalism in the Politics of Taxation in Brazil and South Africa,” published by Cambridge University Press in 2003.

Lieberman’s second book, “Boundaries of Contagion: How Ethnic Politics Have Shaped Government Responses to AIDS,” published in 2009 by Princeton University Press, grew out of the first. In this case, he looked at the ways South Africa, Brazil, and India, among other characteristically multiethnic countries, developed responses to the AIDS crisis.

The connection between the two projects, in one sense, came from Lieberman conducting research on his dissertation just as the full scope of AIDS in South Africa became apparent. South Africa and Brazil, he noticed, had “flipped” in terms of their effectiveness on this issue, compared to their tax systems.

“At that moment it was just becoming clear that South Africa had such a laggard and backward approach to responding to AIDS, whereas Brazil was the world’s leader and most ahead of the curve on this,” he recollects.

How did this occur? In South Africa, “There was a politics of blame and shame avoidance,” he says, which existed due in part to the racial politics of the apartheid regime; blacks were stigmatized as being carriers of AIDS. But even after the new democracy took hold, Lieberman concluded, “No one wanted to say, ‘This is a problem that affects black south Africans,’ because it just played into bad stereotypes.”

By contrast, he found, “In Brazil, a country that continues to have huge socioeconomic disparities coordinated with color … there was never a sense that AIDS was an epidemic that faced one social group and not another. And so it was really treated as a truly national problem.”

Today Lieberman has expanded the geographic scope of his work and is more likely to be running field experiments that focus more on individuals and less on the state institutions that were the focus of his books.

His historically-grounded work, Lieberman says, “helps me do better research [now] because I think I understand the nuances of what various actors face in terms of their constraints and interests.” But when it comes to designing field experiments, he adds, “I enjoy using some of these tools.”

Among his other current projects are multiple studies about the factors that may help politicians abide by ethical standards. Lieberman is a co-author, for instance, of a new working paper examining whether voters in South Africa reward accountable politicians with votes at the ballot box.

“It’s too easy to assume that all African politicians are corrupt,” Lieberman says. “But we know, particularly in [South Africa] there have been plenty of high-level politicians who had incredible integrity and made personal sacrifices for the collective good.” On the local level, he adds, “There are many reports of scandals, but I’ve also met lots of local politicians who are incredibly hard-working and dedicated to their constituencies … I think we’ll be able to get some interesting insights.”