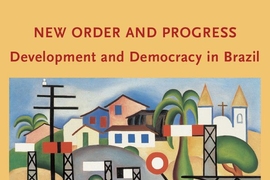 Brazil has been much touted in the 21st century as a fast-rising “BRIC” country (Brazil, Russia, India, China) spurring global growth. But a sprawling political corruption scandal and economic turmoil have cast shadows on this once-sunny landscape. President Dilma Rousseff faces impeachment hearings over potentially misappropriating bank funds for the state, and former president Luiz Inácio Lula da Silva is implicated in a corruption case. Ben Ross Schneider, the Ford International Professor of Political Science and director of the MIT-Brazil Program, has been studying Brazil for decades and is the editor of a new volume on the country: “New Order and Progress: Development and Democracy in Brazil,” published this month by Oxford University Press. (The book stems in part from connections forged through the MIT-Brazil Program.) Schneider talked with MIT News about the progress and setbacks Brazil is experiencing.

Q: Brazil only emerged from dictatorship in the 1980s. Given the current corruption scandal reaching into the president’s office, how do you assess the robustness of its democracy?

A: It’s always a humbling experience to publish on Brazil because events move so rapidly. It’s only about five years ago that people were talking about Brazil’s sustained takeoff into development and democratic consolidation, and now it’s in the midst of the worst economic crisis in almost a century, and the worst political crisis in 20 years. Things change quickly.

I think nobody could have imagined the extent of the corruption crisis. It exceeds previous known corruption crises [in Brazil] by an order of magnitude. There are over 100 people indicted, many of them in jail. There were signs of corruption earlier. But this is bigger than anyone suspected.

For many Brazilians it’s hard to see the silver lining, because the crisis is so deep, but the bright spot is that the judiciary and the other accountability agencies have been doing their work, uncovering these fraud and corruption schemes. It’s a fairly new development in Brazil that they have been able to use plea bargains, which barely existed 20 years ago and have been developed by a series of young prosecutors, but that’s what opened up this case. People have made agreements and that has led to further discoveries. So plea bargaining is very new and it has been working very well.

Other institutions have also been working, not smoothly exactly but mostly according to rule. There’s a political crisis and increasing likelihood of an impeachment [of President Rousseff], but it’s going according to the institutional rules.

Q: Brazil’s economy grew significantly until recent years, but it has long been dependent on exporting commodities, among other things. How can it emerge with a more diversified economy?

A: What so surprised Brazil was that it came through the 2008-09 world financial crisis very well. For the first time in Brazilian history, there was a world recession without a Brazilian recession. And that got people thinking, “Maybe this time really is different.” It turned out not to be true as the world economy slowed, in particular that of China, on which Brazil had become so dependent. That had a direct impact on Brazilian exports. But there are a lot of other domestic factors: slow productivity growth, low investment, the fiscal crisis, inflation, high interest rates, and more. Most people suspected that the end of the commodity boom would come, and for Brazil it was particularly bad timing, because the country was also going into its own fiscal and other crises.

The optimistic view would be that there have been attempts over the past decades to address some of the issues underlying the slow productivity growth: for example, increasing investment in education and technology, which took place through the beginning of the crisis. So if and when the other crises are resolved, we [could] see more growth from these investments in education, and innovation, and human capital.

A: Yes, definitely. The first [large-scale political] demonstrations came out before the 2014 World Cup, really in 2013, and that signaled a moment when it was clear there was generalized dissatisfaction with public services. This has to do with health care and education in particular, which the new middle class realized were not up to the standards it was expecting, I think. About 1.5 million jobs disappeared in the last year, and a lot of this is hitting the new middle class hard. But there was a decade and a half of expansion, and assuming the crisis doesn’t continue indefinitely, much of that middle class should survive.