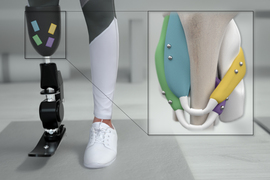 ↓ Download Image
Caption: Researchers at MIT’s Media Lab have developed a new strategy that could offer much more precise control of prosthetic limbs.
Credits: Courtesy of the researchers

Caption:
Researchers at MIT’s Media Lab have developed a new strategy that could offer much more precise control of prosthetic limbs.
Credits:
Courtesy of the researchers

For people with amputation who have prosthetic limbs, one of the greatest challenges is controlling the prosthesis so that it moves the same way a natural limb would. Most prosthetic limbs are controlled using electromyography, a way of recording electrical activity from the muscles, but this approach provides only limited control of the prosthesis.

Researchers at MIT’s Media Lab have now developed an alternative approach that they believe could offer much more precise control of prosthetic limbs. After inserting small magnetic beads into muscle tissue within the amputated residuum, they can precisely measure the length of a muscle as it contracts, and this feedback can be relayed to a bionic prosthesis within milliseconds.

In a new study appearing today in Science Robotics, the researchers tested their new strategy, called magnetomicrometry (MM), and showed that it can provide fast and accurate muscle measurements in animals. They hope to test the approach in people with amputation within the next few years.

“Our hope is that MM will replace electromyography as the dominant way to link the peripheral nervous system to bionic limbs. And we have that hope because of the high signal quality that we get from MM, and the fact that it’s minimally invasive and has a low regulatory hurdle and cost,” says Hugh Herr, a professor of media arts and sciences, head of the Biomechatronics group in the Media Lab, and the senior author of the paper. 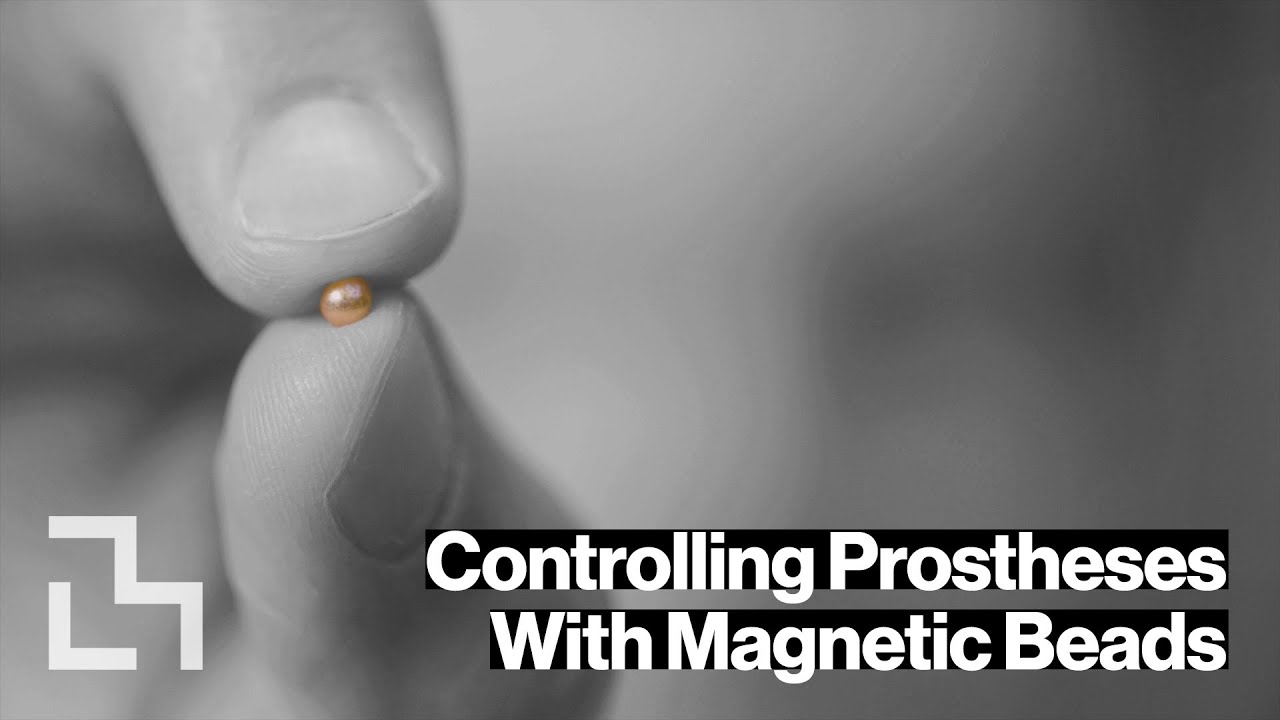 With existing prosthetic devices, electrical measurements of a person’s muscles are obtained using electrodes that can be either attached to the surface of the skin or surgically implanted in the muscle. The latter procedure is highly invasive and costly, but provides somewhat more accurate measurements. However, in either case, electromyography (EMG) offers information only about muscles’ electrical activity, not their length or speed.

“When you use control based on EMG, you're looking at an intermediate signal. You’re seeing what the brain is telling the muscle to do, but not what the muscle is actually doing,” Taylor says.

The new MIT strategy is based on the idea that if sensors could measure what muscles are doing, those measurements would offer more precise control of a prosthesis. To achieve, that, the researchers decided to insert pairs of magnets into muscles. By measuring how the magnets move relative to one another, the researchers can calculate how much the muscles are contracting and the speed of contraction.

Two years ago, Herr and Taylor developed an algorithm that greatly reduced the amount of time needed for sensors to determine the positions of small magnets embedded in the body. This helped them to overcome one of the major hurdles to using MM to control prostheses, which was the long lag-time for such measurements.

In the new Science Robotics paper, the researchers tested their algorithm’s ability to track magnets inserted in the calf muscles of turkeys. The magnetic beads they used were 3 millimeters in diameter and were inserted at least 3 centimeters apart — if they are closer than that, the magnets tend to migrate toward each other.

Using an array of magnetic sensors placed on the outside of the legs, the researchers found that they were able to determine the position of the magnets with a precision of 37 microns (about the width of a human hair), as they moved the turkeys’ ankle joints. These measurements could be obtained within three milliseconds.

For control of a prosthetic limb, these measurements could be fed into a computer model that predicts where the patient’s phantom limb would be in space, based on the contractions of the remaining muscle. This strategy would direct the prosthetic device to move the way that the patient wants it to, matching the mental picture that they have of their limb position.

“With magnetomicrometry, we’re directly measuring the length and speed of the muscle,” Herr says. “Through mathematical modeling of the entire limb, we can compute target positions and speeds of the prosthetic joints to be controlled, and then a simple robotic controller can control those joints.”

Within the next few years, the researchers hope to do a small study in human patients who have amputations below the knee. They envision that the sensors used to control the prosthetic limbs could be placed on clothing, attached to the surface of the skin, or affixed to the outside of a prosthesis.

MM could also be used to improve the muscle control achieved with a technique called functional electrical stimulation, which is now used to help restore mobility in people with spinal cord injuries. Another possible use for this kind of magnetic control would be to guide robotic exoskeletons, which can be attached to an ankle or another joint to help people who have suffered a stroke or developed other kinds of muscle weakness.

“Essentially the magnets and the exoskeleton act as an artificial muscle that will amplify the output of the biological muscles in the stroke-impaired limb,” Herr says. “It’s like the power steering that’s used in automobiles.”

Another advantage of the MM approach is that it is minimally invasive. Once inserted in the muscle, the beads could remain in place for a lifetime without needing to be replaced, Herr says.

The research was funded by the Salah Foundation, the MIT Media Lab Consortia, the National Institutes of Health, and the National Science Foundation.

Forbes contributor Stephanie MacConnell spotlights the work of research affiliate Shriya Srinivasan PhD '20 in a roundup of women under the age of 30 who are transforming U.S. healthcare. Srinivasan is “working on technology that will enable patients to control and even ‘feel’ sensation through their prosthetic limb,” notes MacConnell.

MIT researchers are using magnets to help improve control of prosthetic limbs, reports Emmett Smith for Mashable. “The researchers inserted magnetic beads into muscle tissue to track the specific movements of each muscle,” reports Smith. “That information is then transferred to the bionic limb, giving the users direct control over it.”