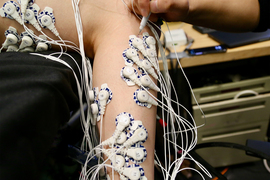 ↓ Download Image
Caption: MIT researchers in collaboration with surgeons at Harvard Medical School have devised a new type of amputation surgery that can help amputees better control their residual muscles and receive sensory feedback.
Credits: Image courtesy of the researchers

Caption:
MIT researchers in collaboration with surgeons at Harvard Medical School have devised a new type of amputation surgery that can help amputees better control their residual muscles and receive sensory feedback.
Credits:
Image courtesy of the researchers

MIT researchers have invented a new type of amputation surgery that can help amputees to better control their residual muscles and sense where their “phantom limb” is in space. This restored sense of proprioception should translate to better control of prosthetic limbs, as well as a reduction of limb pain, the researchers say.

In most amputations, muscle pairs that control the affected joints, such as elbows or ankles, are severed. However, the MIT team has found that reconnecting these muscle pairs, allowing them to retain their normal push-pull relationship, offers people much better sensory feedback.

“Both our study and previous studies show that the better patients can dynamically move their muscles, the more control they’re going to have. The better a person can actuate muscles that move their phantom ankle, for example, the better they’re actually able to use their prostheses,” says Shriya Srinivasan, an MIT postdoc and lead author of the study.

In a study that will appear this week in the Proceedings of the National Academy of Sciences, 15 patients who received this new type of surgery, known as agonist-antagonist myoneural interface (AMI), could control their muscles more precisely than patients with traditional amputations. The AMI patients also reported feeling more freedom of movement and less pain in their affected limb.

“Through surgical and regenerative techniques that restore natural agonist-antagonist muscle movements, our study shows that persons with an AMI amputation experience a greater phantom joint range of motion, a reduced level of pain, and an increased fidelity of prosthetic limb controllability,” says Hugh Herr, a professor of media arts and sciences, head of the Biomechatronics group in the Media Lab, and the senior author of the paper.

Other authors of the paper include Samantha Gutierrez-Arango and Erica Israel, senior research support associates at the Media Lab; Ashley Chia-En Teng, an MIT undergraduate; Hyungeun Song, a graduate student in the Harvard-MIT Program in Health Sciences and Technology; Zachary Bailey, a former visiting researcher at the Media Lab; Matthew Carty, a visiting scientist at the Media Lab; and Lisa Freed, a Media Lab research scientist.

Most muscles that control limb movement occur in pairs that alternately stretch and contract. One example of these agonist-antagonist pairs is the biceps and triceps. When you bend your elbow, the biceps muscle contracts, causing the triceps to stretch, and that stretch sends sensory information back to the brain.

During a conventional limb amputation, these muscle movements are restricted, cutting off this sensory feedback and making it much harder for amputees to feel where their prosthetic limbs are in space or to sense forces applied to those limbs.

“When one muscle contracts, the other one doesn’t have its antagonist activity, so the brain gets confusing signals,” says Srinivasan, a former member of the Biomechatronics group now working at MIT’s Koch Institute for Integrative Cancer Research. “Even with state-of-the-art prostheses, people are constantly visually following the prosthesis to try to calibrate their brains to where the device is moving.”

A few years ago, the MIT Biomechatronics group invented and scientifically developed in preclinical studies a new amputation technique that maintains the relationships between those muscle pairs. Instead of severing each muscle, they connect the two ends of the muscles so that they still dynamically communicate with each other within the residual limb. In a 2017 study of rats, they showed that when the animals contracted one muscle of the pair, the other muscle would stretch and send sensory information back to the brain.

Since these preclinical studies, about 25 people have undergone the AMI procedure at Brigham and Women’s Hospital, performed by Carty, a surgeon in the Division of Plastic and Reconstructive Surgery at Brigham and Women’s Hospital. In the new PNAS study, the researchers measured the precision of muscle movements in the ankle and subtalar joints of 15 patients who had AMI amputations performed below the knee. These patients had two sets of muscles reconnected during their amputation: the muscles that control the ankle, and those that control the subtalar joint, which allows the sole of the foot to tilt inward or outward. The study compared these patients to seven people who had traditional amputations below the knee.

Each patient was evaluated while lying down with their legs propped on a foam pillow, allowing their feet to extend into the air. Patients did not wear prosthetic limbs during the study. The researchers asked them to flex their ankle joints — both the intact one and the “phantom” one — by 25, 50, 75, or 100 percent of their full range of motion. Electrodes attached to each leg allowed the researchers to measure the activity of specific muscles as each movement was performed repeatedly.

“The AMI patients’ ability to control these muscles was a lot more intuitive than those with typical amputations, which largely had to do with the way their brain was processing how the phantom limb was moving,” Srinivasan says.

In a paper that recently appeared in Science Translational Medicine, the researchers reported that brain scans of the AMI amputees showed that they were getting more sensory feedback from their residual muscles than patients with traditional amputations. In work that is now ongoing, the researchers are measuring whether this ability translates to better control of a prosthetic leg while walking.

The researchers also discovered an effect they did not anticipate: AMI patients reported much less pain and a greater sensation of freedom of movement in their amputated limbs.

“Our study wasn’t specifically designed to achieve this, but it was a sentiment our subjects expressed over and over again. They had a much greater sensation of what their foot actually felt like and how it was moving in space,” Srinivasan says. “It became increasingly apparent that restoring the muscles to their normal physiology had benefits not only for prosthetic control, but also for their day-to-day mental well-being.”

The research team has also developed a modified version of the surgery that can be performed on people who have already had a traditional amputation. This process, which they call “regenerative AMI,” involves grafting small muscle segments to serve as the agonist and antagonist muscles for an amputated joint. They are also working on developing the AMI procedure for other types of amputations, including above the knee and above and below the elbow.

“We’re learning that this technique of rewiring the limb, and using spare parts to reconstruct that limb, is working, and it’s applicable to various parts of the body,” Herr says.

The research was funded by the MIT Media Lab Consortia; the National Institutes of Health's National Institute of Child Health and Human Development and National Center for Medical Rehabilitation Research; and the Congressionally Directed Medical Research Programs of the U.S. Department of Defense.

Boston Globe reporter Michael Blanding spotlights Prof. Hugh Herr’s work with Dr. Matthew Carty in developing a new amputation surgery called agonist-antagonist myoneural interface (AMI) procedure, which reconnects muscles to amplify electrical signals sent along the nerves. “My dream as a scientist is that a person with an arm amputation could play a Beethoven piece at normal speeds and dexterity – and for legs, that a person could dance ballet,” says Herr.

A new documentary titled “Augmented” spotlights Prof. Hugh Herr and his work developing bionic limbs at the MIT Media Lab, reports Dana Gerber for The Boston Globe. “The long-term hope for the procedure is that people with Ewing amputations will be able to further adapt to the bionic limbs shown in the film, which Herr’s team is developing at MIT,” writes Gerber.

A new amputation technique being developed by MIT researchers provides patients with more sensory feedback from prosthetic limbs, writes Anjana Ahuja for the Financial Times. “The technique could transform the way that amputation has long been viewed,” writes Ahuja, “not as a last-resort method that subtracts from the body but an act of rejuvenation with the potential to restore a sense of completeness.”

Here & Now’s Scott Tong speaks with Gideon Gil of STAT about a new technique for amputation surgery developed by researchers from MIT and Brigham and Women’s Hospital that recreates muscle connections and restore the brain’s ability to sense where and how one’s limbs are moving.

Researchers from MIT have developed a new kind of surgery that could offer amputees better control of their muscles and prosthetic limbs after surgery, reports Cara Murez for U.S. News & World Report. “In this new type of surgery — called agonist-antagonist myoneural interface, or AMI — surgeons reconnect those muscle pairs so they retain the push-pull relationship they've always had and improve sensory feedback,” writes Murez.

Postdoc Shriya Srinivasan has devised a new way to perform amputation surgery that would reconnect dangling nerves to the skin and help restore a patient’s sense of touch, reports Anissa Gardizy for The Boston Globe. “I would hope that in the next 10 years, people are offered the ability to have these advanced techniques incorporated into their initial surgery,” she said.

Mashable spotlights how MIT researchers have developed a new type of amputation surgery that could “help amputees better control their residual muscles and sense where their ‘phantom limb’ is in space.”