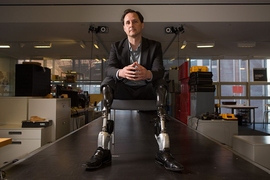 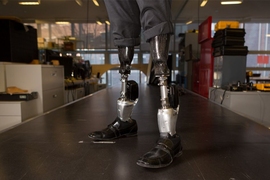 These days, Hugh Herr, an associate professor of media arts and sciences at MIT, gets about 100 emails daily from people across the world interested in his bionic limbs.

Messages pour in from amputees seeking prostheses and from media outlets pursuing interviews. Then there are students looking to join Herr’s research group. “The technology inspires young people to get into the field, which is wonderful,” Herr says.

It’s a mark of the groundbreaking work Herr has done at the MIT Media Lab over the past two decades. An amputee himself, Herr has been designing (and wearing) bionic leg prostheses that, he says, “emulate nature” — mimicking the functions and power of biological knees, ankles, and calves.

Last month, Herr’s TED talk made headlines, as Adrianne Haslet-Davis, a professional dancer whose leg was partially amputated after the 2013 Boston Marathon bombings, used one of his prostheses to rumba on stage.

Most of these prostheses have reached the world through Herr’s startup, BiOM (originally called iWalk). Since 2010, the company has brought the world’s first bionic foot-and-calf system to more than 900 patients worldwide, including some 400 war veterans.

“It’s always good to design something people will use. It’s great to do the science, yes, but it’s also great to see humanity using something that one has invented,” Herr says, adding: “Translating technology out of the lab keeps engineers honest.”

Using battery-powered “bionic propulsion,” two microprocessors and six environmental sensors adjust ankle stiffness, power, position, and damping thousands of times per second, at two major positions: First, at heel strike, the system controls the ankle’s stiffness to absorb shock and thrust the tibia forward. Then, algorithms generate fluctuating power, depending on terrain, to propel a wearer up and forward.

When fitting the prosthesis to patients, prosthetists can program appropriate stiffness and power throughout all the stages of a gait, using software created by Herr’s group — a process the company calls “Personal Bionic Tuning.”

Among other things, the system restores natural gait, balance, and speed; lowers joint stress; and drastically lowers the time required to acclimate to the prosthesis (which can take weeks or months with conventional models). “Often, within minutes, a patient is walking around, even running around,” says Herr, BiOM’s chief technology officer.

The system, Herr says, could also help prevent osteoarthritis, a joint condition caused by age and leg strain, by providing calf and ankle power and support even in old age.

Getting from “bench to bedside”

Throughout the 1990s and early 2000s, Herr, who lost both legs after a 1982 climbing accident, began researching the deficiencies of conventional prostheses and mathematically modeling how the ankle joint operates while walking.

Among other things, the ankle stiffens and provides propulsion (in the trailing leg) during stride, mitigating impact on the leading leg and lessening strain on the leg joints and back. When amputees wear conventional prostheses — which rely on springs or hydraulics and don’t release more energy than they absorb — they walk more slowly, consume more metabolic energy, and experience greater musculoskeletal stress, which causes joint osteoarthritis.

The scientific and engineering research that ultimately led to today’s BiOM prosthesis was conducted by Herr’s research group within the MIT Media Lab. Since 2003, the group has designed and fabricated many prosthetic prototypes to test hypotheses on human-machine interaction. Several of these — prototype designs with exposed mechanical parts and looping wires — are on permanent display at the MIT Media Lab.

Still today, Herr can remember stepping into the group’s first bionic leg prototype — and then back to a traditional prosthesis — for the first time.

“It was as profound as when you’re walking through the airport and you hit the moving walkway. When you get off and return to normal walking, you’re like, ‘Walking is really strenuous and slow,’” he says. “That’s what it was like going from our powered system to passive conventional systems. So I knew there was magic there clinically.”

Herr’s experience commercializing a computer-controlled knee joint — designed by his group for the Icelandic company Ossur — inspired him to launch iWalk in 2006. The knee, now used by thousands of patients worldwide, utilizes iron particles suspended in oil between steel plates and manipulated by an electromagnetic field to either stiffen or relax during a wearer’s gait.

With Ossur there was a hefty, time-consuming transfer of technology — but launching an MIT startup ensured, among other things, that a core group of inventors would stay on to innovate and commercialize the product.

“I’m always thinking about minimizing the time and investment to get from bench to bedside,” Herr says. “Starting a company is one way of enhancing that efficiency. And it’s ideal for passion: Inventors just care a lot about their inventions, and that passion and commitment fuels commercial progress.”

Today’s BiOM system has undergone more than 20 iterations, funded by roughly $50 million of venture capital and grants — and the company keeps designing and innovating. “Not only is the BiOM Ankle System improving month-by-month, year-by-year, but the company is also planning to launch additional bionic products into the space to provide assistance to a larger number of people,” Herr says.

BiOM’s broader goal is to prevent costly conditions such as osteoarthritis. As we age, the loss of fast muscle fibers, and excessive force, cause the ankle and calf muscles to lose power, driving painful joint disorders, such as knee osteoarthritis and low back pain — caused in part by awkward, limping gaits. Across the elderly population, joint osteoarthritis is a leading cause of mobility impairment.

At least among amputees, Herr says, BiOM could help by fitting elderly populations with leg prostheses equal in biomechanical agility and control to a young adult’s legs: “We find ourselves in a position where we can put 18-year-old calf muscles on patients independent of their age, mitigating the problem of joint osteoarthritis across all populations,” Herr says.

By advancing prostheses, Herr says, the technology could also lead to innovation in a closely related field: humanoid robotics. “Imagine a future where we’ll have bionic feet, ankles, knees, and hips that are technologically optimal. One could just bolt these pieces together to produce a humanoid hardware platform,” Herr says.

But ultimately, the work of both BiOM and Herr’s group at MIT, he says, aims to help revolutionize the idea of “personal bionics,” blurring the lines between electromechanics and the human body. For instance, his MIT group is working, among other things, on bionic limbs that can be controlled by the mind and attached to the body.

“As we march into this century, technology is going to get more intimate with our bodies,” Herr says. “The bionic design approach is grounded in biological science that seeks to fundamentally understand how our bodies and brains work, and translates that knowledge into technology that reflects those principles, leading to a world where technology, because it is so innately human, essentially vanishes.”

Guardian reporter Nicola Davis spotlights Prof. Hugh Herr’s development of an autonomous exoskeleton device that could reduce the amount of energy humans use to walk. “We are taking a first principle approach, and joint by joint understanding deeply what has to be done scientifically and technologically to augment a human,” Herr explains.

Prof. Hugh Herr speaks with Breanna Draxler of Popular Science about the future of bionics. Herr explains that he is “intrigued by the possibility of embedding humanity—our ideas and our creativity—into designable bodies. The artificial limbs we create can be just as beautiful and expressive as our own bodies made of innate cells.”

Prof. Hugh Herr speaks about his work developing bionic limbs on Popular Science’s Futuropolis podcast. When asked about what sort of capabilities bionics may be able to give humans in the future, Herr explains his view that, “If something is possible given physical law, given the laws of nature, then I think ultimately humans will explore it.”

Professor Hugh Herr speaks with NPR about the loss of his legs during a climbing accident almost 30 years ago. The experience inspired Herr, head of the MIT Media Lab's Biomechatronics group, to develop functional prosthetic technology to help other amputees.

Michael Farrell of The Boston Globe reports on a robotic ankle created by Professor Hugh Herr’s startup, BiOM. “The BiOM ankle is programmed to replicate all the natural functionality of the foot and ankle,” writes Farrell.