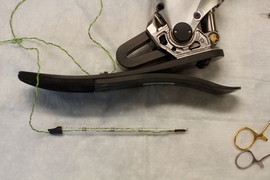 ↓ Download Image
Caption: MIT researchers are developing a new surgical approach that would allow amputees to receive sensory feedback from their prosthetic limbs and improve their ability to control them.

Caption:
MIT researchers are developing a new surgical approach that would allow amputees to receive sensory feedback from their prosthetic limbs and improve their ability to control them.

A new surgical technique devised by MIT researchers could allow prosthetic limbs to feel much more like natural limbs. Through coordination of the patient’s prosthetic limb, existing nerves, and muscle grafts, amputees would be able to sense where their limbs are in space and to feel how much force is being applied to them.

This type of system could help to reduce the rejection rate of prosthetic limbs, which is around 20 percent.

“We’re talking about a dramatic improvement in patient care,” says Hugh Herr, a professor of media arts and sciences and the senior author of the study. “Right now there’s no robust neural method for a person with limb amputation to feel proprioceptive positions and forces applied to the prosthesis. Imagine how that would completely hinder one’s ability to move, to successfully balance, or to manipulate objects.”

In the new study, which appears in Science Robotics on May 31, the researchers demonstrated in rats that their technique generates muscle-tendon sensory feedback to the nervous system, which should be able to convey information about a prosthetic limb’s placement and the forces applied to it. They now plan to begin implementing this approach in human amputees, including Herr, whose legs were amputated below the knee when he was 17.

During a conventional limb amputation, muscles are severed in a way that cuts off a key relationship that normally helps people control their limbs and sense where they are in space. Most muscles that control limb movement occur in pairs known as agonist-antagonist pairs, such that one muscle stretches when the other contracts. For example, when you bend your elbow, the biceps muscle contracts, causing the triceps to stretch, and that triceps stretch sends sensory information related to position, velocity, and force back to the brain. The agonist-antagonist muscle relationship is also what allows people to independently control  position and stiffness at their limb joints.

Without these intact muscle pairs, persons with limb amputation have no way of sensing where their artificial limbs are, nor can they sense the forces applied to those limbs.

“They have to visually follow their hands or their limbs, because there isn’t any feedback from the device or residual limb that tells their brain where their prosthetic limbs are in space,” Srinivasan says.

The MIT team set out to recreate these agonist-antagonist muscle relationships. In many amputees, the nerves that send signals to the amputated limb remain intact. The researchers decided to take advantage of those nerves by connecting them to muscle pairs grafted from another part of the body into the amputation site.

These grafts, which would be about 4 centimeters by 1.5 centimeters in humans, consist of a pair of muscles that work together just like natural muscles. When the brain sends signals instructing a limb to move, one of the grafted muscles will contract, and its agonist will extend. The agonist muscle then sends feedback to the brain about how much the muscle moved and the forces applied to it.

In the Science Robotics paper, the researchers tested the muscle grafts in rats and found that when the rats contracted one muscle of the pair, the other muscle would move in the opposite way and send sensory information back to the brain.

In other work, the researchers have developed the components of a control system that will translate the nerve signals into instructions for moving the prosthetic limb. When the brain sends nerve impulses to the regenerated muscles, those signals will also be received by a microprocessor that controls the movement of the artificial limb.

Neural stimulations will cause the agonist muscle to contract and the antagonist muscle to stretch. The stretched muscle will then provide neural feedback to allow the patient to feel where his or her limb is in space. The researchers expect that the brain will be able to rapidly learn how much control it has to exert to make an artificial limb move in the desired way.

“Using this framework, the patient will not have to think about how to control their artificial limb. When a patient imagines moving their phantom limb, signals will be sent through nerves to the surgically constructed muscle pairs. Implanted muscle electrodes will then sense these signals for the control of synthetic motors in the external prosthesis,” Herr says. “We think that because the brain is so good at remapping and it’s so plastic, it will quickly adapt to knowing how much it has to contract each muscle graft for natural prosthetic control.”

This type of feedback system should also allow people with a prosthetic arm, for example, to feel a torque applied to the prosthesis. “If you were to give a prosthetic-arm user a barbell to hold, they would actually feel the torque on the prosthetic wrist joint,” Herr says.

The researchers anticipate that this strategy could work for nearly any amputee, including people whose amputations were performed many years ago.

“For almost any amputation scenario, as long as we have a little bit of the healthy nerve left, we can take that and put it into regenerative muscle grafts. We can harvest these muscle grafts from almost anywhere in the body, making this applicable to a large number of cases ranging from trauma to chronic pain,” Srinivasan says.

Rickard Branemark, an associate professor of orthopedic surgery at the University of California at San Francisco School of Medicine, describes the new MIT approach as “a brilliant idea.”

“It’s solving one of the major challenges when it comes to control of artificial limbs, which is sensing where the limb is in space,” says Branemark, who was not involved in the study. “If it can be done in humans, the risks involved are fairly limited and the potential benefit could be really huge.”

The research was funded by the MIT Media Lab Consortia.

PBS Nova premiered “Augmented,” a documentary film that features Prof. Hugh Herr and his research team’s work in developing brain controlled robotic limbs and reimagining amputation procedures. “Herr is teaming up with an injured climber and a surgeon at a leading Boston hospital to test a new approach to surgical amputation that allows prosthetic limbs to move and feel like the real thing,” writes PBS Nova.

CBS Boston reporter Dr. Mallika Marshall spotlights research by researchers at MIT and Brigham and Women’s Hospital to develop robotic prosthetic limbs controlled by the brain. “It’s a wonderful experience as a researcher,” explains Herr of the work’s impact. “They walk away and start crying or laughing and giggling and say, ‘my gosh I have my body back, I have leg back, I have my life back.’”

In an article for Forbes, Charles Towers-Clark spotlights how MIT researchers developed a surgical technique that allows amputees to receive feedback from prosthetic limbs. The technique, Towers-Clark writes, “uses a muscle graft from another part of the body to complete the muscle pair, avoiding rejection which currently occurs in around 20% of cases, and allowing the patient to communicate naturally with the new limb.”

Prof. Hugh Herr and his team in the Biomechatronics Group are developing prosthetics that “respond to neural commands with the flexibility and speed of regular limbs,” writes Eillie Anzilotti for Fast Company. In a process pioneered by the group, “doctors leave the tendons and nerve endings intact so they can continue to feed sensations down past where the human leg ends,” Anzilotti says.

Graduate student Shriya Srinivasan speaks with Ira Flatow of PRI’s Science Friday about the surgical technique she and her colleagues developed to make prosthetic limbs feel more natural. Srinivasan explains that the technique allows patients to have, “finer prosthetic control — and be able to modulate position, velocity, and stiffness of prosthetic devices, which is a significant improvement to the clinical standard.”

Researchers at MIT have developed a surgical technique that could lead to more lifelike prosthetic limbs, reports Matthew Hutson for Science. The new technique, coupled with a smart prosthetic, should enable users to “feel the same way that they once felt when they had a limb,” says Prof. Hugh Herr.