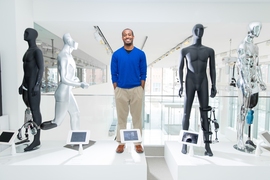 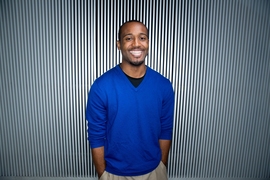 It’s not every day that graduate students get to test out their research on their advisors. But MIT’s David Hill, a PhD student in media arts and sciences, builds computational models of human locomotion, which are the basis for designing ever-better prosthetics — and his advisor, Hugh Herr, an associate professor of media arts and sciences, is a double amputee.

Hill says living in the world of theoretical models can be somewhat insular, so having a real-life example of someone who can benefit from — and pilot — some of the work he does is part of what helps him stay focused.

“I don’t ever want to do research that doesn’t benefit someone else’s life directly,” Hill says.

Hill’s modeling work in the MIT Media Lab extends beyond the world of prosthetics; his research also supports assistive devices that can help maintain or correct the gait of people recovering from strokes, for example. Human movement is a complicated and often taxing activity, though, even for healthy people: Support from robotic wearables could also help make the work of soldiers, construction workers, and other heavy lifters less physically detrimental.

In Herr’s lab, Hill is currently working on modeling the lower extremities during walking. It sounds like a narrow project, but the lab’s focus is on creating robotic devices that mimic biological function as closely as possible. Hill’s model has to account for every minute angle and movement throughout the legs, from the hips all the way down to the joints in the foot. When completed, the model will be used to propel designs for mechanical devices for any part of the lower body, and for a myriad of uses.

Hill’s true passion, however, is sports science. Growing up in western Tennessee, he could usually be found on the basketball court or baseball field. Although he always dreamed of becoming an athlete, he knew early on that his real talents were elsewhere.

Hill recalls a math game, played during elementary school, in which students would stand in a circle and hold up flashcards with equations for one of their classmates to solve; with every equation answered correctly, the solver could continue to progress and make his or her way around the circle. Hill would regularly complete several full rounds before being stumped — his version of sinking a foul shot in a tied basketball game with three seconds left on the clock.

“I wanted to be an athlete so badly,” Hill says. “But I knew it just wasn’t in the cards, so I decided to find another way to stay part of that world.”

Now he aims to use his computational modeling skills to build assistive devices for athletes. Whether the devices help rehabilitate injured players or mitigate some of the physical stresses of athleticism, Hill has his eye on keeping sports a regular part of his life.

From mentee to mentor

Hill attributes much of his journey toward robotics to the mentorship he received. In college, he knew what his strengths were, but not how to funnel them into something constructive. He began as a psychology major at Morehouse College in Atlanta, but — other than the one calculus requirement — felt woefully out of place. It wasn’t until a faculty advisor suggested physics that he found himself on the right path. This same advisor also led him to some of his first exposure to research, including work at Colorado State University supported by the National Science Foundation’s Research Experiences for Undergraduates program.

In an effort to provide this same support to other students — especially undergraduates at colleges with fewer resources for research — Hill splits his free time among a number of service and mentorship organizations, such as MIT’s Grad Catalyst. Through this group, Hill has traveled to colleges around the country offering guidance and insight to students who are interested in graduate school, but unsure of the best way to get there.

“I learned early on that small interactions can have a big impact on development,” Hill says.

After receiving his PhD, Hill hopes to pursue an industry job in sports science, and aspires to someday run his own company.