Kerstin Perez is searching the cosmos for signs of dark matter

“There need to be more building blocks than the ones we know about,” says the particle physicist.
Jennifer Chu | MIT News Office
Publication Date:
Press Inquiries 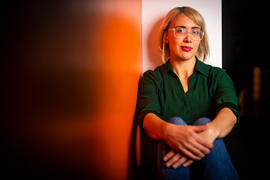 ↓ Download Image
Caption: “We measure so much about the universe, but we also know we’re completely missing huge chunks of what the universe is made of,” Kerstin Perez says.
Credits: Photo: Adam Glanzman

Caption:
“We measure so much about the universe, but we also know we’re completely missing huge chunks of what the universe is made of,” Kerstin Perez says.
Credits:
Photo: Adam Glanzman

Kerstin Perez is searching for imprints of dark matter. The invisible substance embodies 84 percent of the matter in the universe and is thought to be a powerful cosmic glue, keeping whole galaxies from spinning apart. And yet, the particles themselves leave barely a trace on ordinary matter,  thwarting all efforts at detection thus far.

Perez, a particle physicist at MIT, is hoping that a high-altitude balloon experiment, to be launched into the Antarctic stratosphere in late 2022, will catch indirect signs of dark matter, in the particles that it leaves behind. Such a find would significantly illuminate dark matter’s elusive nature.

The experiment, which Perez co-leads, is the General AntiParticle Spectrometer, or GAPS, a NASA-funded mission that aims to detect products of dark matter annihilation. When two dark matter particles collide, it’s thought that the energy of this interaction can be converted into other particles, including antideuterons — particles that then ride through the galaxy as cosmic rays which can penetrate Earth’s stratosphere. If antideuterons exist, they should come from all parts of the sky, and Perez and her colleagues are hoping GAPS will be at just the right altitude and sensitivity to detect them.

“If we can convince ourselves that’s really what we’re seeing, that could help point us in the direction of what dark matter is,” says Perez, who was awarded tenure this year in MIT’s Department of Physics.

In addition to GAPS, Perez’ work centers on developing methods to look for dark matter and other exotic particles in supernova and other astrophysical phenomena captured by ground and space telescopes.

“We measure so much about the universe, but we also know we’re completely missing huge chunks of what the universe is made of,” she says. “There need to be more building blocks than the ones we know about. And I’ve chosen different experimental methods to go after them.”

Born and raised in West Philadelphia, Perez was a self-described “indoor kid,” mostly into arts and crafts, drawing and design, and building.

“I had two glue guns, and I remember I got into building dollhouses, not because I cared about dolls so much, but because it was a thing you could buy and build,” she recalls.

Her plans to pursue fine arts took a turn in her junior year, when she sat in on her first physics class. Material that was challenging for her classmates came more naturally to Perez, and she signed up the next year for both physics and calculus, taught by the same teacher with infectious wonder.

“One day he did a derivation that took up two-thirds of the board, and he stood back and said, ‘Isn’t that so beautiful? I can’t erase it.’ And he drew a frame around it and worked for the rest of the class in that tiny third of the board,” Perez recalls. “It was that kind of enthusiasm that came across to me.”

So buoyed, she set off after high school for Columbia University, where she pursued a major in physics. Wanting experience in research, she volunteered in a nanotechnology lab, imaging carbon nanotubes.

“That was my turning point,” Perez recalls. “All my background in building, creating, and wanting to design things came together in this physics context. From then on, I was sold on experimental physics research.”

She also happened to take a modern physics course taught by MIT’s Janet Conrad, who was then a professor at Columbia. The class introduced students to particle physics and the experiments underway to detect dark matter and other exotic particles. The detector generating the most buzz was CERN’s Large Hadron Collider in Geneva. The LHC was to be the largest particle accelerator in the world, and was expected imminently to come online.

After graduating from Columbia, Perez flew west to Caltech, where she had the opportunity to go to CERN as part of her graduate work. That experience was invaluable, as she helped to calibrate one of the LHC’s pixel detectors, which is designed to measure ordinary, well-known particles.

“That experience taught me, when you first turn on your instrument, you have to make sure you can measure the things you know are there, really well, before you can claim you’re looking at anything new,” Perez says.

Front of the class

After finishing up her work at CERN, she began to turn over a new idea. While the LHC was designed to artificially smash particles together to look for dark matter, smaller projects were going after the same particles in space, their natural environment.

“All the evidence we have of dark matter comes from astrophysical observations, so it makes sense to look out there for clues,” Perez says. “I wanted the opportunity to, from scratch, fundamentally design and build an experiment that could tell us something about dark matter.”

With this idea, she returned to Columbia, where she joined the core team that was working to get the balloon experiment GAPS off the ground. As a postdoc, she developed a cost-effective method to fabricate the experiment’s more than 1,000 silicon detectors, and has since continued to lead the experiment’s silicon detector program. Then in 2015, she accepted a faculty position at Haverford College, close to her hometown.

“I was there for one-and-a-half years, and absolutely loved it,” Perez says.

While at Haverford, she dove into not only her physics research, but also teaching. The college offered a program for faculty to help improve their lectures, with each professor meeting weekly with an undergraduate who was trained to observe and give feedback on their teaching style. Perez was paired with a female student of color, who one day shared with her a less than welcoming experience she had experienced in an introductory course, that ultimately discouraged her from declaring a computer science major.

Listening to the student, Perez, who has often been the only woman of color in advanced physics classes, labs, experimental teams, and faculty rosters, recognized a kinship, and a calling. From that point on, in addition to her physics work, she began to explore a new direction of research: belonging.

She reached out to social psychologists to understand issues of diversity and inclusion, and the systemic factors contributing to underrepresentation in physics, computer science, and other STEM disciplines. She also collaborated with educational researchers to develop classroom practices to encourage belonging among students, with the motivation of retaining underrepresented students.

In 2016, she accepted an offer to join the MIT physics faculty, and brought with her the work on inclusive teaching that she began at Haverford. At MIT, she has balanced her research in particle physics with teaching and with building a more inclusive classroom.

“It’s easy for instructors to think, ‘I have to completely revamp my syllabus and flip my classroom, but I have so much research, and teaching is a small part of my job that frankly is not rewarded a lot of the time,’” Perez says. “But if you look at the research, it doesn’t take a lot. It’s the small things we do, as teachers who are at the front of the classroom, that have a big impact.”

Prof. Kerstin M. Perez writes for Inside Higher Ed about the challenges posed by balancing inclusive teaching with personal and professional endeavors. “I quickly realized that some tenets of inclusive and antiracist teaching advice can undercut the career trajectories, classroom respect and mental health of instructors who are minoritized in their fields—whether due to race, gender or some other nondominant cultural identity—if those tenets are not thoughtfully adapted to our distinct positions in the academy,” writes Perez.