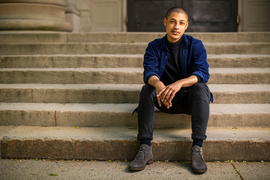 The crowd gasped as the zookeeper entered the room, cradling an armadillo between his hands. For many in the audience, this was their first chance at seeing this unique animal up close. James Brice smiled as he watched faces transform from reservation to delight.

As a child growing up in New York City, Brice had always enjoyed sharing his love for the environment with others. While he pursued an applied physics degree as an undergraduate, teaching was often on his mind. He searched for opportunities that would take place in unconventional classrooms. When an instructor job opened at the nearby Staten Island Zoo, Brice knew it would be a perfect fit. He began his career by educating attendees about the local flora and fauna surrounding his beloved city.

Brice’s love for nature soon led him to pursue other roles at the zoo. He became an aquarist and zoologist, caring for species ranging from emu to fish. The work also required him to maintain and design appropriate enclosures for each biome. Over time, Brice became more involved with systemic decision-making and joined the animal welfare committee. His focus shifted to analyzing habitat enclosures and ensuring they were in accordance with species-specific requirements.

“We would zoom in and study what these animals needed based on their natural history,” Brice explains. “For example, if an animal was semiaquatic, we would need to adapt the enclosure to ensure they still had access to water. Or, for species that dig, we would provide an appropriate substrate. We would also incorporate private space away from the public eye, and multiple areas to eat, drink, or sleep, to introduce more elements of choice.”

Reimagining these enclosures allowed Brice to channel his passion for wildlife in a whole new way. He had to use an engineering mindset, innovating under limited resources while taking wildlife needs into account. The process made Brice realize he enjoyed making major design decisions that could have a positive impact on animals.

“The experience brought me to this question: Is there a way that we can design urban buildings that better work with the natural environment?” he says.

The question became so pressing to Brice that he decided to do something bold. After learning about the interdisciplinary initiatives at MIT, he applied to the School of Architecture and Planning’s professional masters of architecture program. His goal entering the field was to find a way to merge species conservation and architectural design.

“I think the way we study these fields in silos creates a lot of problems in architecture,” Brice says. “I wanted to make sure I could work at the intersection between these disciplines and help bridge the gap.”

Since coming to MIT, Brice has been involved with many activities that serve to build community. He is currently co-teaching a workshop over the summer with Bella Carmelita Carriker called COHABITATE: Entangling Architecture, Infrastructure, and Living Systems. It is focused on using ecological experiments to create visuals that can be translated into an architectural language. Brice approached the idea after struggling to visually represent the affected wildlife in a wetland restoration project he proposed during his first studio class.

“We draw floor plans of massive structures at a quarter inch scale, making it difficult to properly visualize smaller nonhuman co-inhabitants,” explains Brice. “This leads to a major disconnect between architectural communication and the true complexities of the ecological system. We need to find ways to deepen our representation of the existing community.”

To make his message clear, Brice plans on including interactive components for attendees. Participants will get to conduct experiments, such as soil sampling, to experience the basics of site analysis. Though people often overlook soil, Brice wants attendees to learn more about the quantity of life a single ounce contains. He hopes that communicating a greater attention to detail will encourage attendees to strengthen their environmental awareness in future projects.

In addition to teaching interdisciplinary ideas, Brice joined the MIT Water Club to expand his own knowledge. While he knew little about the politics of water, he soon grew fascinated with learning more about coastal resilience. Brice is now co-directing the Fall 2021 Water Summit with fellow graduate student Autumn Deitrick. The theme is coastal cities and ecosystems, a personal interest they both share.

“The Staten Island area is close to my heart, and I’ve seen the eradication of its coastal wetlands over time. I think people are just starting to realize how important these ecosystems are for protecting inland areas against storms,” says Brice. “I’m excited to make sure architecture is represented in these conversations.”

Organizing the summit has also introduced Brice to the importance of environmental modeling. When designing a constructed wetland project, architects must understand how the environment and its water masses will change over time. This requires a background in understanding fluid dynamics, a topic Brice gained familiarity with through his physics degree. His unconventional background has become a tool he utilizes to improve his work.

“Having enough language in physics is useful in articulating its importance to architects. But I think the key realization in the field is that a good design is going to take a diverse team of people,” he says.

Outside of his day-to-day work, Brice continues to be involved with visual arts. He curated the student-run resource-sharing platform Open-Source and co-curated the architecture department’s virtual end-of-year exhibition with Ana Alice McIntosh. He also assisted with a film series earlier this year, called “Cinema and Architectural Imagination. The end of each showing featured conversations about the built environment, architecture, and landscapes throughout the film.

“I still have a passion for communication and sharing knowledge. If there’s one constant in my life so far, it’s that I’ve always wanted to be an educator,” he says.

In terms of a future career, Brice stands by keeping his options open. While he hopes to teach in some way, he is open to paths in both industry and academia. Overall, his main aspiration is to work with interdisciplinary teams that focus on preserving natural ecosystems within the urban landscape.

“To me, it’s about working toward things that I find interesting — trusting that they eventually find synergies and bring new opportunities.”