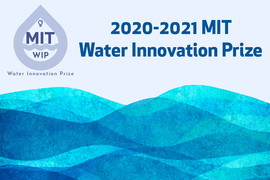 The winner of this year’s MIT Water Innovation Prize, Bloom Alert, is seeking to improve desalination plant operations with a new kind of data monitoring platform. The platform tracks ocean and desalination plant activity and provides early warnings about events that could interrupt clean water production or lead to coastal pollution.

At the heart of Bloom Alert’s solution are models that crunch satellite data in real time to understand what’s going on in the ocean near the plants.

“Coastal events can reduce a plant’s water production capacity by up to 30 percent — that means 30 percent less water for coastal communities,” Bloom Alert team member Enzo Garcia said in the winning pitch. “Our models allow plant operators to apply mitigation measures during emergencies, which improve not only plant efficiency, but also overall water security for potentially millions of people.”

Bloom Alert’s models, which were trained on 20 years of satellite data, are capable of predicting disruption events up to 14 days in advance. That can lead to major savings: Garcia estimates severe riptide events can cost plants up to $200,000 a day.

Team members said their subscription-based platform, developed in their home country of Chile, can be used around the globe at a fraction of the cost of existing solutions.

The company recently completed its first pilot project with the biggest desalination plant in South America. Through the project, Garcia says Bloom is already helping to secure 20 percent of Chile’s desalinated water production.

Now, with $18,000 in new funding earned from the competition’s grand prize, the company is targeting plants in the Middle East, where about half of the world’s desalination plants are located.

“We seek to position ourselves as the worldwide leader in satellite intelligence for the desalination industry,” Garcia says.

The Water Innovation Prize, which helps translate water-related research and ideas into businesses and impact, has been hosted by the MIT Water Club and sponsored by the Abdul Latif Jameel Water and Food Systems Lab (J-WAFS). Each year, student-led finalist teams from around the world pitch their innovations to students, faculty, investors, and people working in various water-related industries.

This year’s event, held virtually on Thursday, included six finalist teams. The second place, $10,000 award was given to Nymphea Labs.

Mosquitos are the deadliest animal on the planet. Every 30 seconds, a child dies of malaria. At a park one day, Nymphea team member Pranav Agarwal noticed a pond that had no mosquito larvae on its surface because wind was causing ripples. A nearby pond, with no wind ripples, was filled with larvae. The observation led to an idea.

Nymphea Labs is marketing a device called Ripple that creates tiny waves on the surface of still water by leveraging solar power. The device, which costs about $10 dollars, requires no maintenance to run. It can also be deployed in fleets to cause ripples across larger bodies of water.

“Today the most widespread solutions are insecticides and insecticide treated bed nets, but more and more we’re seeing that mosquitos are developing a resistance to these chemicals, making these efforts less effective,” Agarwal says.

Nymphia says the device has already led to decreased mosquito populations in small tests. Now the company will be producing 100 units for further testing. The team is hoping Ripple will be helping to protect more than 10 million people by 2025.

“A staggering amount of pollution comes from textile dyeing,” Cattonar says. “Twenty percent of industrial water pollution originates from the textile industry. Each year 6.3 trillion liters of water are used to dye textiles.”

The other finalist teams were:

AgroBeads, which has developed biodegradable water beads designed to reduce the amount of water used in irrigation while providing plants with nutrients;

Brineys, which seeks to to fund new water desalination plants in water insecure countries by selling artisanal salt created as a byproduct of the desalination process; and

Many of the finalist teams seek to address problems expected to worsen over time due to climate change. A sense of urgency has come over efforts to address water shortages in particular as communities increasingly face water distress around the world.

“Demand is outpacing supply, and it’s not happening in five years or 10 years — it’s happening now,” Tom Ferguson, a managing partner as Burnt Island Ventures, said in the keynote to the event.