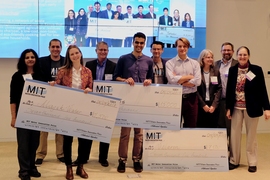 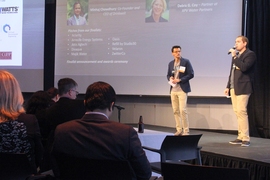 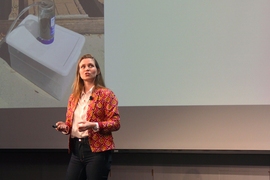 On Wednesday night, Oasis, a student team from Georgia Tech, won the $15,000 grand prize in the MIT Water Innovation Prize competition for its simple, inexpensive test for detecting one problematic microbial contaminant, E. coli. The test uses a color-coded system to determine not just if, but also how contaminated the water is.

Rural India, where E. coli contaminations are common, is Oasis’s first market. But the team hopes in the near future to make the product available to consumers in much of the developing world and across the globe.

“Having seen from very close quarters the kind of suffering that comes out of situations where clean water is not available, I think the solution we’re presenting today is a step in the right direction,” team member Arjun Bir, an undergraduate at Georgia Tech who hails from Bangalore, India, said in his winning pitch.

The event brought in more than 200 students, faculty, and business leaders to the sixth floor of the MIT Media Lab. Second-place prizes for $7,500 went to two other teams: Velaron, developing a smart sensor system for aquaculture shrimp farmers that sends alerts when water oxygen levels are low enough to kill the shrimp; and Majik Water, developing a system that uses a desiccant substance — which attracts and holds water molecules from the surrounding environment — to harvest drinking water from air in arid regions of Africa.

The Oasis test, which costs $2.99, comes as a paper tube with picture-based instructions printed on the side. Inside the tube are two plastic bags — one small, one large — preloaded with E. coli detection powder. Users fill the tube and its cap with drinking water to a fill line and then pour the water in the respective bags.

The solution first turns orange. In a day or two, however, if even a single cell of E. coli is present in either bag, the solution will turn red. Different color combinations determine the level of contamination: safe (both orange), unsafe, low risk (small orange, large red), unsafe, medium risk (small red, large orange), or unsafe, high risk (both red).

Standard equipment for detecting E. coli costs several times more, is more complex and time-consuming, or requires additional materials, such as a ultraviolet light, Bir said. There are less expensive alternatives, he said, but those are designed for food and must be modified to test water, which increases complexity and cost.

“Our test can be performed by anyone, anywhere,” Bir told MIT News. “We’ve given it to children in India, where there’s no access to education, and, just by following the instructions, they’ve been able to perform the test.”

E. coli can be killed with chlorine tablets or by boiling the water. But many people in rural India assume their water is fine or don’t have access to traditional E. coli tests, Bir said. Oasis has so far deployed 3,000 of its tests to 590 households in Kanpur, India. In a month, the team recorded a significant increase in the percentage of houses boiling water, using safer storage containers, and using soap for handwashing.

There’s another perk: Oasis is developing an app that users can enter water-quality results into. That data would be uploaded to a cloud platform that could be accessed by universities, nonprofits, and governmental organizations dedicated to providing clean drinking water to developing countries.

“Right now, those institutions have virtually no water-quality data,” Bir said. The app-paired test, however, “will give them water-quality data at scale for the first time, so they can get an idea of what’s going on and plan interventions in data-driven way.”

With the prize money, Oasis will begin operations at a manufacturing facility already opened in Bangalore. The facility will allow for production of 150,000 tests per year, which will be made available to its nine partner organizations, including UNICEF, Georgia Tech, and the Indian Institute of Technology Kanpur.

“Essentially, it’s about taking this product to at-scale production, for which we have all the preparation done. We just needed the money — and here we are,” Bir said.

Now in its fourth year, the pitch competition is organized and hosted by the student-led MIT Water Club. The aim is to inspire and promote solutions to global water challenges by supporting emerging student entrepreneurs, Preston Kutney, an MIT Sloan School of Management student and co-director of the MIT Water Club, said in his opening remarks.

“That mission is more important today than it has ever been,” Kutney said. “This past year was a year shaped by water. Hurricane Harvey showed us the destructive power of water and Cape Town [South Africa] showed us how fragile some of world’s major cities are to water scarcity. We believe there are innovative solutions to many of these water challenges.”

Organizers received about 60 applications in December, before winnowing that number down to nine finalists. Over several months, the finalist teams participated in networking events and worked with investment, corporate, and entrepreneurial mentors to develop their commercial ventures.

High application numbers this year pointed to the competition’s rising popularity and the public’s mounting concern over water issues, Juan Bazet, an MIT Sloan School of Management student and MIT Water Club co-director, said in his welcoming remarks. “It shows not only that the prize is growing, but also that water is a real issue and more and more people are committing to finding solutions to terrible problems all over the world,” he said.

The event’s two keynote speakers were Minhaj Chowdhury, co-founder and CEO of Drinkwell, a startup developing a nanotechnology-based resin platform that removes arsenic and fluoride from contaminated water, which is now being used by hundreds of thousands of villagers in rural India; and Debra G. Coy, a partner at XPV Water Partners, a leading investment firm focused on high-growth water, related waste, and environmental businesses.