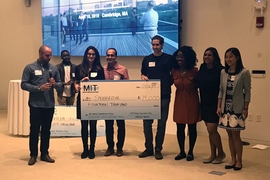 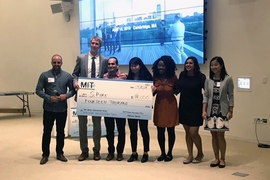 A startup with a cheap technology for purifying textile wastewater and another with a system to help reduce methane emissions from cattle were named co-winners of the MIT Water Innovation Prize on Thursday.

After eight student finalist teams pitched their companies’ water-related solutions, the judges couldn’t agree on the winners and ultimately split the grand prize into two $14,000 checks for the co-winners.

The founders of both the seaweed-producing startup Symbrosia and the textile wastewater purification startup SiPure said they were happy to split the winnings.

“We were just so proud to be here,” SiPure business development lead Lily Cheng Zedler said after the event. “We’re really grateful to the Water Innovation Prize and the judges for believing in us.”

Close to 200 people, including students, faculty, investors, and people working in the private industry, traveled to the sixth floor of the Media Lab for the event. Members from the eight finalist teams came from as far away as Lebanon and as close as the MIT Sloan School of Management to share their ideas.

The third place, $7,000 prize went to Volta Irrigation, which loans seeds, fertilizers, and pesticides to smallholder farmers in Rwanda and surrounding countries, then helps the farmers increase their productivity by loaning them a proprietary irrigation system called the Alma Volta. The stationary, bicycle-like device works by having operators pedal, which powers an inverter, battery, and pump that efficiently distribute over 3,000 liters of water per hour onto crops.

According to the Environmental Protection Agency, methane accounts for about 10 percent of U.S. greenhouse gas emissions. The largest source of methane is livestock such as cows, pigs, and goats, who produce it as part of their normal digestive processes.

Recent research has shown that mixing just 2 percent of a specific kind of algae into a cow’s diet can reduce their methane emissions by 99 percent.

Symbrosia is acting on those findings with a patent-pending system that consists of a tank for growing that algae, a tank for growing shrimp, and chambers that move waste and water back and forth. When waste from the shrimp moves to the algae tank it acts as fertilizer, and as the algae absorb nutrients from the water it produces clean, oxygenated water for the shrimp.

The result is a weekly harvest of algae and local, organic shrimp (which are grown in three-month rotational cycles). The only water loss in the system is due to evaporation, and all of the waste is dissolved back into the water, according to the company. Symbrosia plans to sell the algae to feed suppliers at $1.60 a pound, and the shrimp to restaurants at $24 a pound.

The company will begin its first pilot project with three corporate partners toward the end of this year. Eventually, it plans to place large versions of its system near livestock industry hot spots to maximize its impact.

Cleaning up the textile industry

Garment manufacturers use huge volumes of water each year to dye fabrics. Purifying the resulting wastewater is a complex, expensive process that can account for up to 25 percent of the operating costs of a standard textile mill.

Unfortunately, the low margins in the textile industry lead many manufacturers to dump the wastewater in local waterways. For example, in India, the world’s second largest producer of textiles, 80 percent of textile wastewater goes untreated, according to SiPure.

Wastewater dumping leads to the pollution of drinking water, destruction of local agriculture, and long-term health consequences for people in the area.

SiPure has developed and patented a silicon membrane that it says makes the process of purifying textile wastewater dramatically simpler and cheaper. Billions of tiny nanopores within the membrane allow water to flow through while molecular dyes get stuck.

“It looks boring on the surface, just a gray square,” SiPure co-founder Brendan Smith, who invented the technology during his PhD work in MIT’s Department of Materials Science and Engineering, told the audience during the pitch. “But the magic is in the cross section.”

Smith says the membrane is capable of removing more than 99 percent of the dyes in waters and can be produced for about 10 times less than competing ceramic-based purification technology. SiPure says its membrane also decreases maintenance costs while working for around 10 years.

This summer, the company is starting a pilot project with a textile mill in India, where its membranes will purify 50 to 100 liters of wastewater each day. From there, the founders plan to continue scaling throughout India in hopes of capturing 35 to 40 percent of the market by 2025.

The Water Innovation Prize, which helps translate research and ideas into business and impact, has been hosted by the MIT Water Club since 2015. Each year, student-led finalist teams from around the country and, increasingly, the world, come to MIT’s campus to pitch their water-related innovations.