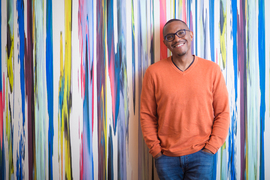 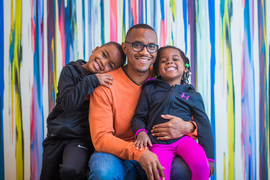 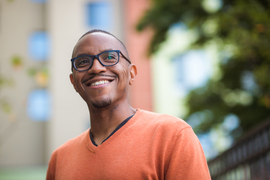 Caption:
Before the pandemic, Winston’s children, Ava and Avery, occasionally accompanied their dad to work, playing quietly in the communal student workspace. “One thing that comes with age is you keep moving, you don’t let little things bog you down — especially when you have a family,” Winston says. “I’m 45 now, so with the life experience that I’ve had, little things — a bad paper, a bad something else — you just chalk it up and move on. Things are character-building; they’re not meant to tear you down.”
Credits:
Image: Gretchen Ertl

For many tourists, a stroll through Rome’s famous Piazza del Popolo is an opportunity to take in beautiful architecture, get some fresh air, and enjoy a little people-watching. What may not be top of mind is that the place has a much darker side: It was used for public executions by hanging.

ElDante Winston doesn’t overlook this fact. The PhD student in MIT’s History, Theory and Criticism of Architecture and Art program is keenly interested in how spaces designed for violence retain a memory of violent acts in the present day.

“Sometimes these spaces were built purposely for war, or they have threatening political purpose or meaning behind them,” says Winston. “These are places of violence that, when you go to them now, you just watch people mill around and eat gelato. But years ago, someone was hanging right in the center of the piazza, if they weren’t decapitated. And we don’t really think about that, and what that means for the space.”

In his work, Winston explores the difference between history and memory: While history is usually favorable to a certain narrative, built spaces can contain evidence of less palatable truths. Even Renaissance architecture is less romantic than it is popularly seen, Winston notes. Instead of an artistic rebirth, as the period is often described, the architecture of the Renaissance represents a regression of sorts, with Gothic architecture of the Middle Ages being rejected in favor of a return to classical style.

“I don’t think people really grasp what happened with [the Renaissance], but these people in the 15th and 16th centuries went back to copy things from ancient Rome,” Winston says. “Before that, it was Gothic architecture, which to them was modern architecture. In reality, they set architecture back a thousand years. No one thinks about what would have happened if Gothic had transformed into something else. We also don’t think much about Islamic architecture; in some regards it progressed past early-modern Western architecture in terms of developing new architectural ideas.”

Winston stresses that architecture is highly political, and one must always remember who is constructing the building in question — politician or billionaire, university or corporation. Often, according to Winston, buildings that serve as displays of power recall the classicism of ancient Rome, while buildings intended for more social purposes take more contemporary forms. These trends are ubiquitous, he says; all one needs to do is look around.

A native of the south side of Chicago, Winston’s love of architecture began at early age. He grew up in the Morgan Park neighborhood, within a few miles of homes designed by Frank Lloyd Wright and buildings by Black architects who were trained under the famed Chicago modernist Ludwig Mies van der Rohe. Influenced by the buildings around him, along with episodes of “This Old House,” Winston had decided to become an architect by second grade.

His love of the Renaissance and its architecture began in college at Ohio State University, though his interest in Italian culture started in 8th grade when he took an Italian language class. A solo trip in 2001 cemented his connection to the country and era. After earning his bachelor’s and master’s degrees in architecture, he worked professionally for six years as an architect before deciding to get another master’s degree in architectural history.

In 2005, Winston had an opportunity to teach high school in Chicago while he continued working independently as an architect in the afternoons and summers. Over the next five years, he discovered an undeniable love for teaching Renaissance architecture, motivating him to obtain his doctorate, with the hope of teaching both architectural design and history — a rare combination in his field.

“There’s a disconnect between history and the studio. But I think that history can infuse your thinking about architecture,” Winston says. “Getting a grasp of the historical context of buildings and what they were responding to is key to architectural education, because if you are designing a building, you are in fact designing in response to a human situation. And if you look at the past and learn how they dealt with it, it can inform how an architect or architectural student responds to current situations.”

Winston is passionate about teaching the intricacies of the past, and looks forward a career in academia after he completes his dissertation. Now in the sixth year of his PhD, he is teaching a course on the global history of buildings and cities at Northeastern University.

“Chalk it up and move on”

Winston manages to juggle parenting two young children and grad school with as much equanimity — and help from his wife, Tonya — as possible. His second child, Ava, was born in Chicago the week before he began his doctoral program, making her growth a testament to the years he’s devoted to both fatherhood and his thesis. Before the pandemic, Ava (age 5) and her big brother Avery (age 7) occasionally accompanied their dad to work, playing quietly in the communal student workspace. Fortunately, Winston says, the staff and students in his program have been very supportive.

While Winston completes his PhD, Tonya works full-time as a business development manager at the MIT Credit Union. They lived in the MIT family housing dormitory Westgate for five years and are now residents of North Cambridge. They are able to get by with their salaries and savings, but Winston is deeply sympathetic to international and single parents, who he says have even greater challenges. “Paying for children is crazy expensive. They grow, you’re buying clothes … and the more they grow, the more they eat!”

Before Covid-19, the family’s weekday routine functioned like a well-oiled machine. “Now it’s just chaos with the kids at home doing remote learning,” Winston says. “I wake up at the same time, but after that everything is up for grabs. Getting any work done is almost impossible as I shuffle between two kids in separate rooms. You almost feel like a teaching assistant for the amount of assistance we provide. … We should ask for compensation!”

Although Winston admits that there are days he’d like to spend more time with his research, being a parent is also an advantage, given the ups and downs of graduate school. “One thing that comes with age is you keep moving, you don’t let little things bog you down — especially when you have a family,” he says. “I’m 45 now, so with the life experience that I’ve had, little things — a bad paper, a bad something else — you just chalk it up and move on. Things are character-building; they’re not meant to tear you down.”