Study highlights long road toward gender parity in the geosciences 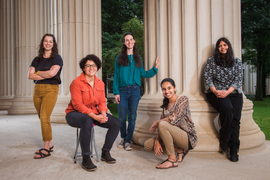 Women and people of color remain underrepresented along every step of the tenure track in every academic field in the United States. As a new MIT study shows, progress toward equitable representation for women in academia will require active, concerted, and sustained effort — and even then, change may be slow in coming.

The study, forthcoming in the journal AGU Advances, tracks the representation of women, specifically among geosciences professors in the U.S., over the last two decades. The researchers compiled a dataset of more than 2,500 tenured and tenure-track geoscience faculty members from 62 universities, to determine the proportion of women by academic rank and discipline.

Since 1999, the number of women in geoscience faculty positions has risen steadily across ranks, although the rate of attrition, or the proportion of faculty members who leave the academic arena, remains greater for women than for men, the results show. Only recently have both groups, on average, advanced through the tenure track at about the same rate. These results highlight the need for more equitable hiring of new faculty at every academic rank, at a rate of 1:1, meaning hiring women and men at the same ratio, the researchers conclude.

If such a 1:1 hiring practice is sustained across the geosciences, the researchers calculated that for assistant and associate professors, gender parity, or equal representation between women and men, should be achieved by 2028 and 2035, respectively. For full professors, owing to a much longer tenure, men and women would not reach equal proportions until 2056.

“For us, 2056 would be when we’re possibly thinking of retiring, assuming a 35-year career,” says study lead author Meghana Ranganathan of the MIT Department of Earth, Atmospheric and Planetary Sciences (EAPS), referring to herself and her co-authors, all of whom are female graduate students intending to pursue academic careers in the geosciences. “Given there’s been this huge focus on equity, inclusion, and diversity in the last few years, we’d like to think that sudden energy would translate to things changing quickly. And the reality is, even if we commit to hiring 1:1, things will change very slowly. That means we can’t lose energy when it comes to thinking of diversity and inclusion. Because losing energy would mean going off this already long timeline toward parity.”

The new study was motivated, in par,t by another study, reported in 2018, that found that, with respect to gender, the percentage of women earning PhDs has steadily risen across all geoscience disciplines since the 1970s. Ranganathan and her colleagues wondered whether this trend carried on up to the faculty level. They were also curious whether recent nationally funded efforts, designed to promote gender equity in academia, have had any effect at the faculty level.

The team compiled a database of 2,531 tenured and tenure-track faculty from 62 U.S. colleges and universities that granted the most geoscience PhDs since 1958. They identified faculty members through department directories and faculty webpages, and assigned a gender identity to each member based on pronouns used in directories and university news sources.

The researchers acknowledge the limitations in this approach, as it does not account for faculty who are misidentified, or who may not identify within a binary gender but nevertheless use binary pronouns in a professional setting. The data that they were able to gather shows that less than 1 percent of geoscience faculty identify as nonbinary on publicly available websites — a number they suspect is much lower than reality.

“This study highlights how much we can learn from having publicly available data that addresses issues of gender, and how much more we could learn if we had data including the full spectrum of diversity,” Freilich says.

From their compiled dataset, the team observed that over the last 20 years, the percentage of female faculty across disciplines and ranks, while consistently lower than men, has been steadily increasing. This percentage decreases with rank, however, with the smallest fraction of women at the full professor level.

This proportional loss of women has commonly been described as a “leaky pipeline.” Ranganathan and her co-authors take issue with this analogy, pointing out that it implies that women’s attrition from academia is due to their passively leaving the system.

“We’re pretty motivated by thinking about accountability,” Lalk says. “We were interested in focusing not only on attrition, but the bias in attrition between men and women. Men, quote, ‘leak out of the pipeline’ too, but it’s the fact this is happening to some groups more than others that we want to address.”

The group developed a new metric to evaluate the rate of attrition of women compared to men along each step along the tenure track. They labeled the metric a “fractionation factor,” after a concept in geochemistry that refers to processes that affect the proportion of isotopes in the same element. In this context, fractionation refers to the fraction of women compared with men within the pool of faculty, across academic rank.

The researchers derived a simple formula to calculate a fractionation factor, or the proportional attrition of women to men, across faculty ranks. On average, they found that at all career stages from 1999 to 2015, women had a higher rate of attrition and advanced less often than men.

In 2020, however, the attrition rate of women and men was about equal. While the exact causes for this change are unknown, the researchers suspect that recent equity initiatives may be playing a part in actively retaining more women at the professional level.

“Things are getting better, and there’s a reason for it,” Ranganathan says. “It’s not just an organic change. It has a lot to do with concerted efforts to ensure there’s parity in how we hire and promote faculty.”

She and her coauthors, who are pursuing PhDs in various geosciences disciplines, intend to stay in academia, and one day be professors themselves. Their study, which they worked on in their spare time, apart from their primary research, has motivated them to stay in their respective fields, while also pushing for equity across the gender spectrum.

“I want to keep working in my field and pushing for these cultural shifts in my spare time,” Freese says. “But that extra labor comes at a cost, and I don’t want us to have to work until we retire to finally experience equal representation."

This research was supported, in part, by the EAPS Houghton Fund and MIT Libraries.

Paper: “Trends in the representation of women among US geoscience faculty from 1999-2020: the long road towards gender parity”

Straight talk about race in academia