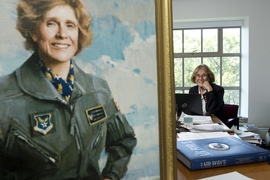 Sheila Widnall, MIT Institute Professor and former secretary of the U.S. Air Force, was co-chair of a report commissioned by the National Academies of Sciences, Engineering, and Medicine to explore the impact of sexual harassment of women in those fields. Along with co-chair Paula Johnson, president of Wellesley College, Widnall and dozens of panel members and researchers spent two years collecting and analyzing data for the report, which was released over the summer. On Sept. 18, Widnall, Johnson, and Brandeis University Professor Anita Hill will offer their thoughts on the report’s findings and recommendations, in a discussion at MIT’s Huntington Hall, Room 10-250, from 3:00 to 4:00 p.m. Widnall spoke with MIT News about some of the report’s key takeaways.

Q: As a woman who has been working in academia for many years, did you find  anything in the results of this report that surprised you, anything that was unexpected?

A: Well, not unexpected, but the National Academy reports have to be based on data, and so our committee was composed of scientists, engineers, and social scientists, who have somewhat different ways of looking at problems. One of the challenges was to bring the committee together to agree on a common result. We couldn’t just make up things; we had to get data. So, we had some fundamental data from various universities that were taken by a recognized survey platform, and that was the foundation of our data.

We had data for thousands and thousands of faculty and students. We did not look at student-on-student behavior, which we felt was not really part of our charge. We were looking at the structure of academic institutions and the environment that’s created in the university. We also looked at the relationship between faculty, who hold considerable authority over the climate, and the futures of students, which can be influenced by faculty through activities such as thesis advising, and letter writing, and helping people find the next rung in their career.

At the end of the report, after we’d accumulated all this data and our conclusions about it, we said, “OK, what’s the solution?” And the solution is leadership. There is no other way to get started in some of these very difficult climate issues than leadership. Presidents, provosts, deans, department heads, faculty — these are the leaders at a university, and they are essential for dealing with these issues. We can’t make little recommendations to do this or do that. It really boils down to leadership.

Q: What are some of the specific recommendations or programs that the report committee would like to see adopted?

A: We found many productive actions taken by universities, including climate surveys, and our committee was particularly pleased with ombudsman programs — having a way that individuals can go to people and discuss issues and get help. I think MIT has been a leader in that; I’m not sure all universities have those. And another recommendation — I hate to use the word training, because faculty hate the word training — but MIT has put in place some things that faculty have to work through in terms of training, mainly to understand the definitions of what these various terms mean, in terms of the legal structure, the climate structure. The bottom line is you want to create a civil and welcoming climate where people feel free to express any concerns that they have.

One of the things we did, since we were data-driven, was that we tried to collect examples of processes and programs that have been put in place by other societies, and put them forward as examples.

We found various professional societies that are very aware of things that can happen offsite, so they have instituted special policies or even procedures for making sure that a meeting is a safe and welcoming environment for people who come across the country to go to a professional meeting. There are several examples of that in the report, of societies that have really stepped forward and put in place procedures and principles about “this is how you should behave at a meeting.” So I think that’s very welcome.

Q: One of the interesting findings of the report was that gender harassment — stereotyping what people can or can’t do based on their gender — was especially pervasive. What are some of the impacts of that kind of behavior?

A: A hostile work environment is caused by the uncivility of the climate. All the little microinsults, things like telling women they can’t solder or that women don’t belong in science or engineering. I think that’s really an important point in our report. Gender discrimination is most pervasive, and many people don’t think it’s wrong; they just don’t give it a second thought.

If you have a climate where people feel that they can get away with that kind of behavior, then it’s more likely to happen. If you have an environment where people are expected to be polite — is that an old-fashioned word? — or civil, people act respectfully.

It’s pretty clear that physical assault is unacceptable. So we didn’t deal a lot with that issue. It’s certainly a very serious kind of harassment. But we did try to focus on this less obvious form and the responsibilities of universities to create a safe and welcoming climate. I think MIT does a really good job of that.

I think the numbers have helped to improve the climate. You know, when I came to MIT women were 1 percent of the undergraduate student body. Now it’s 46 percent, so clearly, times have changed.

When I came here as a freshman, my freshman advisor said, “What are you doing here?” That wasn’t exactly welcoming. He looked at me as if I didn’t belong here. And I don’t think that’s the case anymore, not with such a high percentage of undergraduates being women. I think increasingly, people do feel that women are an inherent part of the field of engineering, in the field of science, in medicine.