Straight talk about race in academia 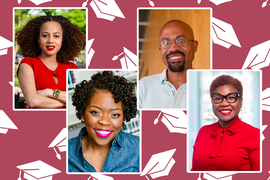 In 2020, historically large and widespread protests in the U.S. have increased public awareness about systemic racism in all spheres of society. There is, for instance, more work needed to create a more diverse, equal-opportunity academic system — as a panel discussion hosted by MIT last Thursday made clear.

“Anti-Black racism is built into the bedrock of the United States, so naturally it is going to manifest itself in various social institutions,” said Shardé Davis, a faculty member at the University of Connecticut and a co-founder of the #BlackInTheIvory hashtag on Twitter last June.

That hashtag has proven to be a popular way for Black scholars to share their experiences and frustrations about academic life, which include persistent stereotyping by others, with resulting professional consequences; feelings of isolation; a lack of mentoring for Black academics and limited networking opportunities; and even incidents of harassment and assault.

The platform lets Black scholars discuss “the microaggressions, the unwanted touches to someone’s hair … being questioned if they’re the janitor if they’re in the lab after hours, being asked for identification when they’re trying to go into the lecture hall,” as Davis explained.

She added: “What I found to be one of the most interesting [things] in reading the tweets was how sometimes people were telling the exact same [kind of] story, and I mean down to the minutia. And these are people who went to grad school in different time periods, who are different generations, men and women, different fields, from programs across the United States, and sharing the exact same stories.”

Indeed, the panel made clear, many Black scholars feel there has been limited progress on the equity front in recent decades.

“This is not a new conversation, and that’s what is so frustrating,” said Mareena Robinson Snowden PhD ’17, a senior engineer in the National Security Analysis Department at the Johns Hopkins University Applied Physics Laboratory.

“As a person of color, particularly as a Black person, you will oftentimes not be afforded that automatic authority that might be conferred to a white person that has your same level of background, the same publication record,” said James Mickens, the Gordon McKay Professor of Computer Science at Harvard University.

The event, titled “#BlackInTheIvory: Academia’s Role in Institutional Racism,” was moderated by Tanya Ballard Brown, an editor at National Public Radio who in her remarks noted the value of discussing “best practices, lessons learned, and how to navigate some of these situations that others have been struggling with over the years.” The MIT Communications Forum event was co-sponsored by Radius at MIT and the MIT Governance Lab.

The scholars on the panel emphasized how different the academic experience can be for Black scholars, due to their isolation — and, as a related matter, the reductive and clumsy ways even potentially well-meaning white scholars can structure their interactions with Black colleagues.

“For me, it was critical, while I was at MIT, and now that I’m at Johns Hopkins, to find community,” said Snowden, who was the first Black woman to receive a PhD in nuclear engineering from MIT. “Shardé’s hashtag was that in the digital space. She created community in the digital space so people could acknowledge and corroborate and endorse your experience, and say, ‘No, you are not crazy, this does happen, and it is wrong, and it exists in this systematic context that matters.’”

As a Black scholar, Snowden added, “You are often the only one on the room, so every decision you make feels so consequential.”

Even requests that may seem relatively anodyne to others can present thorny problems for Black scholars. For instance: Black faculty and graduate students are often asked to serve on more committees than their non-Black counterparts, since those committees, one by one, try to diversify their own ranks — creating an extra burden of time, energy, and distraction that non-Black scholars do not face at critical career junctures.

For many reasons, Snowden added, many institutions have attrition problems in the ranks of Black academics, especially in the graduate ranks and beyond: “Students are getting [to this level] with all of the vigor and enthusiasm and promise, and for whatever reason, they’re leaving with a master’s when they applied for a PhD, they’re leaving before the tenure track happens, or they’re not getting tenure at all.”

Among many other things, the panelists noted, non-Black faculty should not just voice words of sympathy to Black colleagues, but proactively work to lessen the distinctive burdens on them.

“I also think that white academics absolutely need to … stop offloading this work onto ‘Blackademics’ and other people of color,” said Davis, who is an assistant professor in the Department of Communication at UConn. “We all have a role. That could mean a concerted effort to mentor and advise other Black graduate students — that is not just the responsibility of Black faculty, to advise and mentor Black graduate students and Black undergraduate students. [Other faculty] have a role in that as well.”

The many intangible traditions and norms of academia make it all the more important that white scholars work with their Black counterparts and students, the panel also suggested.

“Even in engineering, it is a social science,” Mickens said. “There are plenty of people who are super-smart, super-bright, who didn’t build the right network. And you don’t hear about those folks. And so I think it’s very important to build that community. And it can’t just be people of color. Why is that? Because there’s not a lot of us out there right now. … If you do have allies who are white, you should allow them to help you.”

Beyond discussing ways to help the career trajectories of Black academics, the panel’s participants discussed some specific strategies for both airing problems in the first place, and then addressing them within institutional settings.

The #BlackInTheIvory hashtag has generated input from across academia, but at the University of Connecticut, Davis noted, Black students have an Instagram page where they can post anonymously about their experiences, helping those who would prefer not to identify themselves.

When it comes to meeting with other community members and leaders, Davis said, “We email them the agenda beforehand, so we all know the things we plan to speak about.”

Mickens had advice about sitting down with campus leaders, noting “You want to say, ‘What are concrete and specific things we’re going to do here? And you also want to say, ‘What are the evaluation metrics?’” He added: “Go in there with a sheet of paper, so other people can see how much or how little you’ve written down. … If you don’t write anything down, that’s a subtle but not-so-subtle message that we haven’t really made progress here. We’re just sort of exchanging platitudes.”

The panelists offered varying perspectives about strategies of self-presentation in everyday academic settings, including research talks, academic meetings, and more.

“In some cases speaking in your authentic voice may not be received well by the audience,” said Mickens, while also noting, “I think an unfortunate consequence of that is you will sometimes have to tweak your message a bit, or change the way you talk. And this is just as a practical thing.”

The other panelists noted there are limits to the extent to which Black scholars can or should modulate the ways they express themselves.

“We should not give the system a pass in making us feel like we must speak in a certain way or use certain vocabulary,” Snowden said. “Yes, there is tailoring to your audience, I totally agree with that, I love that framing. [But] in less formal interactions, you should feel empowered, and you should push against the system to not focus on the form but focus on the substance of what you’re saying.”

For her part, Davis also noted that Black people have limited control over the way they are perceived, saying, “That really doesn’t have much to do with our own behavior.”

And yet, for all of these challenges, the panelists suggested, making progress on racial equity and opportunity in academia is not an insoluble problem, either.

“It is exhausting to have to explain some of these things to well-intentioned but confused people,” Mickens said. “But one thing I’ve seen at least personally in my career, and when I look at the careers of my friends, and other folks, is that Black scholars who’ve been able to thread that needle — and on the one hand speak with some of that fire and point out things that are problematic in the ivory tower, but also build coalitions, create a sense of community, not just among other Black scholars but among white scholars, not just women but men as well — those people tend to be the most effective.”

Letter regarding efforts to address systemic racism at MIT