By making the microbes more tolerant to toxic byproducts, researchers show they can use a wider range of feedstocks, beyond corn.
Anne Trafton | MIT News Office
Publication Date:
Press Inquiries 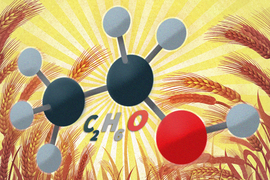 Boosting production of biofuels such as ethanol could be an important step toward reducing global consumption of fossil fuels. However, ethanol production is limited in large part by its reliance on corn, which isn’t grown in large enough quantities to make up a significant portion of U.S. fuel needs.

To try to expand biofuels’ potential impact, a team of MIT engineers has now found a way to expand the use of a wider range of nonfood feedstocks to produce such fuels. At the moment, feedstocks such as straw and woody plants are difficult to use for biofuel production  because they first need to be broken down to fermentable sugars, a process that releases numerous byproducts that are toxic to yeast, the microbes most commonly used to produce biofuels.

The MIT researchers developed a way to circumvent that toxicity, making it feasible to use those sources, which are much more plentiful, to produce biofuels. They also showed that this tolerance can be engineered into strains of yeast used to manufacture other chemicals, potentially making it possible to use “cellulosic” woody plant material as a source to make biodiesel or bioplastics.

“What we really want to do is open cellulose feedstocks to almost any product and take advantage of the sheer abundance that cellulose offers,” says Felix Lam, an MIT research associate and the lead author of the new study.

Gregory Stephanopoulos, the Willard Henry Dow Professor in Chemical Engineering, and Gerald Fink, the Margaret and Herman Sokol Professor at the Whitehead Institute of Biomedical Research and the American Cancer Society Professor of Genetics in MIT’s Department of Biology, are the senior authors of the paper, which appears today in Science Advances.

Currently, around 40 percent of the U.S. corn harvest goes into ethanol. Corn is primarily a food crop that requires a great deal of water and fertilizer, so plant material known as cellulosic biomass is considered an attractive, noncompeting source for renewable fuels and chemicals. This biomass, which includes many types of straw, and parts of the corn plant that typically go unused, could amount to more than 1 billion tons of material per year, according to a U.S. Department of Energy study — enough to substitute for 30 to 50 percent of the petroleum used for transportation.

However, two major obstacles to using cellulosic biomass are that cellulose first needs to be liberated from the woody lignin, and the cellulose then needs to be further broken down into simple sugars that yeast can use. The particularly aggressive preprocessing needed generates compounds called aldehydes, which are very reactive and can kill yeast cells.

To overcome this, the MIT team built on a technique they had developed several years ago to improve yeast cells’ tolerance to a wide range of alcohols, which are also toxic to yeast in large quantities. In that study, they showed that spiking the bioreactor with specific compounds that strengthen the membrane of the yeast helped yeast to survive much longer in high concentrations of ethanol. Using this approach, they were able to improve the traditional fuel ethanol yield of a high-performing strain of yeast by about 80 percent.

In their new study, the researchers engineered yeast so that they could convert the cellulosic byproduct aldehydes into alcohols, allowing them to take advantage of the alcohol tolerance strategy they had already developed. They tested several naturally occurring enzymes that perform this reaction, from several species of yeast, and identified one that worked the best. Then, they used directed evolution to further improve it.

“This enzyme converts aldehydes into alcohols, and we have shown that yeast can be made a lot more tolerant of alcohols as a class than it is of aldehydes, using the other methods we have developed,” Stephanopoulos says.

Yeast are generally not very efficient at producing ethanol from toxic cellulosic feedstocks; however, when the researchers expressed this top-performing enzyme and spiked the reactor with the membrane-strengthening additives, the strain more than tripled its cellulosic ethanol production, to levels matching traditional corn ethanol.

The researchers demonstrated that they could achieve high yields of ethanol with five different types of cellulosic feedstocks, including switchgrass, wheat straw, and corn stover (the leaves, stalks, and husks left behind after the corn is harvested).

“With our engineered strain, you can essentially get maximum cellulosic fermentation from all these feedstocks that are usually very toxic,” Lam says. “The great thing about this is it doesn’t matter if maybe one season your corn residues aren’t that great. You can switch to energy straws, or if you don’t have high availability of straws, you can switch to some sort of pulpy, woody residue.”

The researchers also engineered their aldehyde-to-ethanol enzyme into a strain of yeast that has been engineered to produce lactic acid, a precursor to bioplastics. As it did with ethanol, this strain was able to produce the same yield of lactic acid from cellulosic materials as it does from corn.

This demonstration suggests that it could be feasible to engineer aldehyde tolerance into strains of yeast that generate other products such as diesel. Biodiesels could potentially have a big impact on industries such as heavy trucking, shipping, or aviation, which lack an emission-free alternative like electrification and require huge amounts of fossil fuel.

“Now we have a tolerance module that you can bolt on to almost any sort of production pathway,” Stephanopoulos says. “Our goal is to extend this technology to other organisms that are better suited for the production of these heavy fuels, like oils, diesel, and jet fuel.”

The research was funded by the U.S. Department of Energy and the National Institutes of Health.

UPI reporter Brian Dunleavy writes that MIT researchers have developed a new way to potentially expand sources of biofuel to include straw and woody plants. "Our goal is to extend this technology to other organisms that are better suited for the production of these heavy fuels, like oils, diesel and jet fuel," explains Prof. Gregory Stephanopoulos.

A step toward renewable diesel