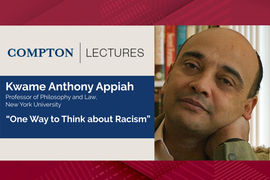 Philosopher Kwame Anthony Appiah offered a timely commentary while delivering the latest of MIT’s Compton lectures on Thursday, outlining a framework for understanding racism as a tool for social control, and not simply as an expression of prejudice.

“Racism is an ideology, whose effect is to oppress people of one racial identity or maintain unjust advantages for those of another,” Appiah said. “What makes people, beliefs, feelings, institutions, and practices racist is that they contribute to that wrong.”

This view, he said, has multiple implications. For one thing, racial thinking is not borne out of meaningful biological differences; anti-Black racism, for instance, only fully emerged in connection with the development of the modern Atlantic slave trade.

Morever, he noted, while those oppressive structures sustain themselves “in part by creating people who are individually racist,” racism stems from “all our social practices, that we build in common.” Disamantling it, he added, “really must be done by we the people, acting together.”

The Compton Lectures are MIT’s most prominent annual speaking series, featuring  experts in a wide range of fields, from politics and government to science, the humanities, music, and journalism. While the lectures are traditionally held on campus in MIT Kresge Auditorium, this year Appiah’s talk, “One Way to Think about Racism,” was delivered via webcast due to the Covid-19 pandemic.

MIT President L. Rafael Reif began the event with introductory remarks, calling Appiah a “pioneering scholar and philosopher” who, in addition to his output of books and academic papers, also acts as “a probing, witty, compassionate, and morally demanding guide” as author of a regular newspaper column, “The Ethicist,” in the Sunday magazine of The New York Times.

Among Appiah’s highest-profile books are “Cosmopolitanism: Ethics in a World of Strangers,” from 2006; “The Honor Code: How Moral Revolutions Happen,” published in 2010; and “The Lies that Bind: Rethinking Identity,” from 2018. The child of a Ghanian father and English mother, Appiah has woven his personal experiences, family history, and reflections on identity into some of his best-known writings. In 2012, Appiah was awarded the National Humanities Medal by President Barack Obama.

Appiah cited the Harvard University philosopher Tommie Shelby in stating “it helps to think of racism” as an ideology, that is, one of our “widely accepted illusory systems of belief that function to establish or reinforce structures of social oppression.”

Among other things, considering racism in these terms illuminates the reproduction of racial prejudices, since social divisions create conditions in which those prejudices can be widely perpetuated: “Segregation, for example, made it easier to have false belief about other races, because of the way it kept the races apart,” Appiah said.

For this reason among others, Appiah suggested, while racism may be perpetuated by individuals, responsibility also accrues to the society-wide structures that generate racist ideology and allow its transmission among people and over time.

“You can have a racist belief, and it’s a bad thing to have, but [it may be one] for which you are not to blame,” Appiah said. “It’s wrong, but it’s not [necessarily], so to speak, your wrong.”

Regarding the full-blown creation of anti-Black prejudice that arose to justify the Atlantic slave trade, Appiah noted, “Its effect was to rationalize the appalling treatment of Black people that the trade and practice of enslavement involved, as well as to defend, a little bit later, colonial empires.” He added: “We are still living with legacies of that white supremacy.”

A corollary of defining racism in terms of its contributions to larger social inequities, Appiah stated, is that programs such as affirmative action can be consistent with ideals of fairness.

“Racial solidarity among African Americans, given the history of white supremacy, is not a kind of racist ideology, and the attitudes it produces are not racist,” Appiah said, while noting that stereotypes held by members of any group toward any other can be unfair.

In any event, Appiah pointed out, white Americans have a particular role to play in dismantling anti-Black racism, because of the social advantages afforded them: “When white people … point to acts of anti-Black racism, they’re less likely than Black people of being suspected of being hypersensitive or self-interested. You can also speak up in all-white settings when people venture anti-Black remarks.”

“One kind of institution that should be better at this than most is the university, because we’re full of people who are trying to think outside the box,” Appiah said.

Using the case of the great intellectual W.E.B. Du Bois, the first African American to receive a doctorate from Harvard, Appiah noted, “his experience both as an undergraduate and graduate student … was of course profoundly shaped by the fact that he was surrounded by people who had racist attitudes. Simply letting him in was not enough. I mean, he triumphed anyway, but figuring out how to make him feel that it was his place as much as theirs, that he was as welcome as them … all of that is more complicated than just saying, ‘Okay, come on in.’”

All told, Appiah said, unwinding racist structures is a massive task but one that can be helped by clear recognition of what those structures are and how they function.

“Given its pervasiveness, that’s going to take a while,” Appiah said. “But at least, once we’re clearer about what it [racism] is, we can set about the task, acting, all of us, whatever our racial identity, in a concerted program, to dismantle the racism that has so poisoned the history of this republic of ours, as it has poisoned the history of countries around the world.”