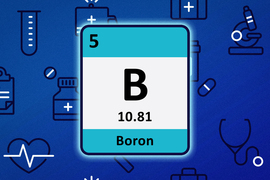 ↓ Download Image
Caption: MIT chemists have created a new boron-containing chemical group that is 10,000 times more stable than boron on its own.
Credits: Image: MIT News

Caption:
MIT chemists have created a new boron-containing chemical group that is 10,000 times more stable than boron on its own.
Credits:
Image: MIT News

Boron, a metalloid element that sits next to carbon in the periodic table, has many traits that make it potentially useful as a drug component. Nonetheless, only five FDA-approved drugs contain boron, largely because molecules that contain boron are unstable in the presence of molecular oxygen.

MIT chemists have now designed a boron-containing chemical group that is 10,000 times more stable than its predecessors. This could make it possible to incorporate boron into drugs and potentially improve the drugs’ ability to bind their targets, the researchers say.

“It’s an entity that medicinal chemists can add to compounds they’re interested in, to provide desirable attributes that no other molecule will have,” says Ron Raines, the Firmenich Professor of Chemistry at MIT and the senior author of the new study.

To demonstrate the potential of this approach, Raines and his colleagues showed that they could improve the protein-binding strength of a drug that is used to treat diseases caused by the misfolding of a protein called transthyretin.

Boron is most commonly found in the Earth’s crust in the form of minerals such as borax. It contains one fewer electron than carbon and is hungry for additional electrons. When boron is incorporated into a potential drug compound, that hunger for electrons often leads it to interact with an oxygen molecule (O2) or another reactive form of oxygen, which can destroy the compound.

The boron-containing drug bortezomib, which prevents cells from being able to break down used proteins, is an effective cancer chemotherapy agent. However, the drug is unstable and is destroyed readily by oxygen.

Previous research has shown that the stability of boron-containing compounds can be increased by appending benzene, a six-carbon ring. In 2018, Raines and his colleagues used this approach to create a modified version of a drug called darunavir, a protease inhibitor used to treat HIV/AIDS. They found that this molecule bound to HIV protease much more tightly than the original version of darunavir. However, later studies revealed that the molecule still did not survive for long under physiological conditions.

In the new paper, the researchers decided to use a chemical group called a carboxylate to further anchor boron within a molecule. An oxygen atom in the carboxylate forms a strong covalent bond — a type of bond that involves sharing pairs of electrons between atoms — with boron.

“That covalent bond pacifies the boron,” Raines says. “The boron can no longer react with an oxygen molecule in the way that boron in other contexts can, and it still retains its desirable properties.”

One of those desirable properties is the ability to form reversible covalent bonds with the target of the drug. This reversibility could prevent drugs from permanently locking onto incorrect targets, Raines says. Another useful feature is that the boron-containing group — also known as benzoxaboralone — forms many weaker bonds called hydrogen bonds with other molecules, which helps to ensure a tight fit once the right target is located.

Once they showed that benzoxaboralone was significantly more stable than boron in other contexts, the researchers used it to create a molecule that can bind to transthyretin. This protein, which carries hormones through the bloodstream, can cause amyloid diseases when it misfolds and clumps. Drugs that bind to transthyretin can stabilize it and prevent it from clumping. The research team showed that adding benzoxaboralone to an existing drug helped it to bind strongly with transthyretin.

Benzoxaboralone may offer medicinal chemists a useful tool that they can explore in many different types of drugs that bind to proteins or sugar molecules, Raines says. His lab is now working on a new version of darunavir that incorporates benzoxaboralone. They recently developed a way to synthesize this compound and are now in the process of measuring how strongly it binds to HIV protease.

“We are working hard on this because we think that this scaffold will provide much greater stability and utility than any other presentation of boron in a biological context,” Raines says.

MIT has filed for a patent on the use of benzoxaboralone in medicinal chemistry and other areas. The research was funded by the National Institutes of Health and the National Science Foundation.

New drug combination could be more effective against melanoma