One nation under contract 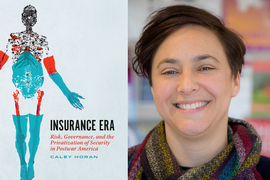 For decades, the famous American poet Wallace Stevens lived a double life: He was also an insurance executive. Occasionally, Stevens would write about his day job. It may not be his most transcendent work, but the essays are revealing.

“If private companies can continue to expand with profit and adapt to the changing needs of changing times, no question of nationalization is likely to arise under our system,” Wallace asserted in one 1937 piece, which he wrote while a vice president at the Hartford Accident and Indemnity Company.

Wallace was talking about the New Deal. The founding of Social Security in 1935 had created what many in the insurance industry regarded as a major threat: Suddenly the federal government was in the insurance business, in a sense. Thus, Stevens was outlining a path forward for private industry, contending that it could grow and thrive despite the construction of a federal safety net.

Before long, the insurance industry began fighting back against what it viewed as a government incursion into its territory. It has kept fighting, quite successfully. This effort is the subject of Caley Horan’s new book, “Insurance Era: Risk, Governance, and the Privatization of Security in Postwar America,” published by the University of Chicago Press. (The title refers to that 1937 Stevens essay.)

In it, Horan examines the rise of the industry into a postwar behemoth — one that expanded into real estate, shaped the social geography of America through its policies, and has always promoted the sense that insurance, while pooling risk, boils down to a private business contract between customers and brokers.

“It’s an irony that this inherently collective pursuit, insurance, is ultimately used to atomize, to sell a vision of atomized individualism, by masking the collective nature of insurance,” says Horan, an associate professor of history at MIT.

Insurance companies have extended their influence in American life in many ways. In one section of “Insurance Era,” Horan chronicles the industry’s long-running efforts to influence opinion through ads and public-relations campaigns. For instance, in one 1950 ad from the Institute of Life Insurance, a few workers say, “The only real Security is self-made!” Another ad features a farmer and proclaims, “He’s made his own way!” The message: Real Americans use private insurance.

“One way to turn the tide of public opinion away from expansion of the welfare state was to associate public insurance programs with dependency, and private programs with autonomy, freedom, and individual responsibility,” Horan says. “That rhetoric started in the late 1930s, and has been incredibly successful, and it’s still with us.”

More subtly, perhaps, insurance companies and industry groups started a wide variety of seemingly public-minded campaigns to get Americans to live healthier, more balanced lives — distributing materials to schools and libraries about health and weight, and launching driver-training programs. However, Horan notes, those efforts had the effect of shifting responsibility for healthy living to individuals (as opposed to, say, environmental drivers of health outcomes).

Real estate for some

Meanwhile, the insurance industry started moving its financial clout into real estate. The massive Stuyvesant Town section of Manhattan was developed by the Metropolitan Life Insurance Company in the 1940s — with the company winning legal battles by claiming that, as a private entity, it could keep Black people from living there. And Stuyvesant Town was just the biggest of these types of urban developments.

“The idea that you can create affordable housing at mass scale appeals to a lot of people,” Horan says. “But the question is, once you’ve done so, how are you going to manage that? Who’s going to have access to it? And the insurance companies’ answer was: white people.”

At the same time, as the book chronicles, insurers were redlining, denying insurance access, or charging high rates for people living in nonwhite neighborhoods. Before long, insurance companies started developing property outside of cities, playing a major role in the postwar suburbanization of the U.S.

“I think it’s a decisive moment, when the insurance industry moves its jobs and dollars to the suburbs, taking money out of cities and pouring it into the suburbs,” Horan says. “That had consequences in the spatial development of the country.”

Insurance as a social project — but for whom?

Horan’s book also explores battles over insurance and gender. In the 1970s, women’s groups sought to obtain gender-blind or “unisex” treatment from insurance companies; the industry fought back and by the early 1980s triumphed by claiming that differential rates were justified by the concept of “actuarial fairness,” the calibration of policies to particular groups.

That battle, among others detailed in the book, lets Horan illuminate a central tension surrounding the insurance industry in American life: Who is included, and under what terms? Insurance by its nature is a collective enterprise. And yet the private insurance industry in the U.S. has long assumed the role of a kind of gatekeeper, limiting the spread of benefits. “Insurance Era” is a business history with considerable political relevance today.

“If you look at insurance as a social project, it always involves redistribution, sharing, and social organization,” Horan says. “Americans tend to overlook that collective aspect, seeing instead only individual responsibility.”

She adds: “We pay our premiums to our auto insurer, and we don’t tend to think that a chunk of that is going to someone who had a car accident. We’re participating in a resdistributive project by participating in any form of insurance, really, but we don’t think of it that way. Why not? Because there’s been a concerted effort on the part of the insurance industry to prevent us from thinking of it that way.”

Developing a picture of France

The Philippines, the US, and a century of military alliance