The Philippines, the US, and a century of military alliance 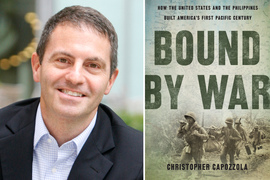 ↓ Download Image
Caption: MIT Historian Christopher Capozzola is the author of the new book, “Bound by War: How the United States and the Philippines Built America's First Pacific Century,” published by Basic Books.
Credits: Photo courtesy of the author

Caption:
MIT Historian Christopher Capozzola is the author of the new book, “Bound by War: How the United States and the Philippines Built America's First Pacific Century,” published by Basic Books.
Credits:
Photo courtesy of the author

For a few nights in late 1991, a 74-year-old army veteran, newly arrived in Los Angeles and looking for family members, needed to sleep outside. Pastor Amarillento was a recently naturalized Filipino American, based on a 1990 law granting citizenship to Philippine Army soldiers from World War II. Amarillento had fought at Bataan. But after being naturalized in San Francisco, his money had been stolen on the bus down to Los Angeles.

Thus Amarillento had “marched under General Douglas MacArthur, only to find himself, 50 years later, sleeping in MacArthur Park,” writes MIT historian Christopher Capozzola in a new book about the unique relationship between the Philippines and the United States.

Amarillento soon found relatives in Orange County, thanks to help from a shelter in the Filipinotown neighborhood, near downtown Los Angeles. Still, this episode symbolizes some contours of the larger Filipino American experience. Filipinos have long been staunch U.S. military soldiers, sailors, and servicemembers while receiving modest, belated rewards for their efforts. The countries’ ties have led to extensive immigration — there are 4 million Filipino-Americans in the U.S. — but even for decorated veterans, entry into U.S. society has not always been easy.

Capozzola’s new book, “Bound by War: How the United States and Philippines Built America’s First Pacific Century,” published by Basic Books, details both the military relationship between the countries, from the U.S. conquest of the Philippines in 1898 onward, and the way that military engagement shaped social connections between the nations.

“This is not a book about foreign policy, but foreign relations,” Capozzola says. “Not just what generals and presidents were doing, but what ordinary soldiers and immigrants were doing.”

After winning the Spanish-American War in 1898, the U.S. was granted control of the Philippines, a long-time Spanish possession. Then it squelched a Philippine independence movement, in what Capozzola calls a “very intense and brutal war.” It was a huge imperial leap across the Pacific for the U.S., which eventually installed over 20 military bases in the Philippines and ruled the land as a colony until 1946.

“This is really the heart of the relationship between these two countries,” Capozzola says.

Before long, Filipinos started enlisting in the U.S. army and navy, and Filipinos soon had new immigration opportunities as well. For a spell after 1924, the Philippines was the only country in Asia from which the U.S. allowed immigration. The number of Filipinos in the U.S. swelled from 5,600 in 1920 to about 56,000 in 1930, with substantial Filipino-American communities springing up near San Diego, in the Bay Area, and around Norfolk and Virginia Beach — close to Navy bases.

But while many Filipinos had come to the U.S. hoping to acquire more education and better work, they often landed on farms, in fisheries, or in service jobs, as Capozzola documents.

“When Filipinos migrated to the United States in the early 20th century, they faced the same forms of discrimination that most Asian immigrants did: restrictions on housing and education and the professions, [while] being relegated to low-status, low-paying jobs,” Capozzola says. “It could have been otherwise. And that’s a running theme throughout the book as well. There is a series of broken promises.”

Still, as Capozzola writes, the military service of many Filipino men gave their familes “a language of patriotism and sacrifice — and therefore of equality.” That sense of belonging helped spur battles for civic justice. It was Filipino grape pickers who initiated what became famous as the United Farm Workers strike of the 1960s.

In the sphere of veteran’s rights, 64,000 of the 76,000 prisoners on the Bataan Death March had been Filipinos, fighting for the U.S. — yet they did not receive equitable military benefits. Only after a concerted effort, including a year-long vigil in MacArthur Park in the 1990s, was compensation folded into the 2009 American Recovery and Reinvestment Act.

Only about 12,400 Filipino veterans realized those payments, leading one advocate for Filipino veterans to call the settlement “yet another beginning” in the battle for Filipino-American rights and benefits. There may be similar fights for inclusion in the future: In the Iraq War, about 31,000 U.S. troops were not citizens, and 20 percent of those were Filipino.

“The book is a way to think about who serves in and with and for our armed forces, [and] to ask what we owe them in return,” Capozzola says. “If we really want to understand big forces like war and globalization, we need to look at that full frame.”

With or without the U.S.?

While it explores immigration and social integration, “Bound by War” also examines politics in both countries after 1946, when the Philippines gained independence but remained in the U.S. sphere of influence.

“In many ways the Philippines enters the community of nations on the back foot,” Capozzola observes. “It’s devastated by the war, its economy is destroyed, and there is an emerging Cold War threat. This requires Philippine politicians to maintain ties to the U.S. in order to protect their country.”

But many voices have criticized that arrangement, Capozzola notes: “If there’s one central question in Philippine foreign policy that’s consistent from 1946 to the present, it is this: Are we better off with the Americans, or without them?”

President Ferdinand Marcos declared martial law in the Philippines in 1972 and ruled over a police state until the “People Power” movement ousted him in 1986 — with the U.S. only belatedly grasping the strength of opposition leader Corazon Aquino. Yet despite solid U.S. backing, Marcos actually made rhetorical overtures to China in the 1970s, perhaps trying to play off the two powers against each other. In 2016, President Rodrigo Duterte surprised the U.S. by announcing the Philippines would “realign” with China, but has not followed through on the idea.

On the ground, the U.S.-Philippines relationship evolved again in 1965 when U.S. immigration law allowed Asians back into the country — especially white-collar workers. In the 1970s, Filipinos were the second-largest group immigrating to the U.S., behind only Mexicans.

Today Filipino emigration is worldwide, with workers settling in the Gulf States, elsewhere in Asia, and some parts of Europe. Overall, Filipino immigrants sent an estimated $10 billion in remittances back home in 2005.

“The core aspects of the U.S.-Philippine military relationship are remarkably unchanged from the early 20th century to today,” Capozzola says. “What has changed is the power of Filipinos themselves. The economy is substantially different and not as tied to the United States. Filipino migrations are global, and the United States is not by any means the largest recipient country. Through their everyday choices, the relationship is being remade. And I think ultimately that will shift the U.S.-Philippine military relationship.”

“To understand 20th-century America, you need to understand the U.S. military,” Capozzola says. “Not only as a [fighting] force, although of course that’s what it was designed for, but also a generative force that transforms social relationships, immigration patterns, ideas about race and culture. This book is a way to bring that to the center of the story.”

Prof. Christopher Capozzola speaks with Bob DeCastro of Good Day LA about the campaign to name a U.S. Navy Warship after Fireman 2nd Class Telesforo Trinidad, the only American national of Asian and Filipino descent to have received a Congressional Medal of Honor. “I think in some ways, there’s no better tribute to the century of work that Filipinos sailors did to keep the ship going than to name one of our ships after one of the most heroic Filipino sailors that we know,” says Capozzola.

3 Questions: Christopher Capozzola on the history of chemical-weapons bans