Developing a picture of France 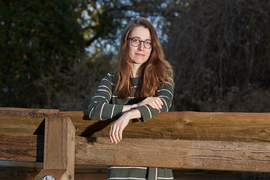 In the late 1940s, famed French photojournalist Henri Cartier-Bresson documented the last days of China’s Nationalist government, before Mao Tse-Tung and the communists seized power. True to form, Cartier-Bresson produced striking images of a dramatic historical moment — such as a crowd desperately packed together outside a Shanghai bank, and a group of Nationalist military recruits in Beijing’s Forbidden City.

In a sense, Cartier-Bresson could take those photos because he was French. The U.S. had strongly supported the Nationalists and, knowing they were widely reviled, virtually no Americans remained in China at the time. But a brave French photojournalist more plausibly could stay on, and France wanted to remain central to world affairs through such relationships.

“The French became brokers of Chinese pictures and objects to the rest of the world in this period, because of the geopolitics of the time,” says MIT scholar Catherine Clark.

So while iconic photos tell a story, there is often a story behind them. This is the terrain Clark explores in her research: the creation of cultural images, their use, and their public meaning.

“I’m interested in how we know things, and how is knowledge produced,” says Clark, an associate professor of history and French studies. “I’ve landed on images as the thing that [fascinates] me the most. What work do images do to construct our world views? How does having a photograph change the way we think?”

In her 2018 book, “Paris and the Cliché of History,” Clark showed how photography, a French creation, evolved along with Paris itself — from a tool documenting the city’s physical form to a medium through which World War II resistance fighters staged fanciful, symbolic pictures of themselves, anticipating how they would appear to future generations.

“This interest in China is a kind of informal empire-building, in the sense that France’s privileged access to China is a way of compensating for a loss of physical empire elsewhere,” says Clark, who has also been leading an MIT project on image-recognition software for photo archives and taught an array of courses on French and European history and culture.

“That‘s why I really like working at MIT. I’m interested in a lot of different things and how they can come together and form a whole, and I think you see that in my research,” Clark says. “I have varied interests, but there is a central concern that is being worked out.”

For her scholarship and teaching, Clark was awarded tenure at MIT last year.

Growing up, Clark moved around frequently in the U.S., attending high school in Utah while discovering that she had some consistent affinities.

For one thing, Clark says, “I was always interested in history.” For another, she did well in French classes.

“French was this way to be someone else and to have a pathway to a totally different world,” she adds. “When I was in college these two interests met, and I realized I could study French history and use language as a gateway to knowing about another place.”

Clark’s work falls within a subfield of history known as “history and memory,” which has gained traction in the last few decades. Initially, a lot of studies in this area focused on the Holocaust, World War II, and the public remembrance of these catastrophes. That certainly interests Clark, but her own work has applied the approach more broadly.

“What grew out of a particular political concern to me is more expansive now,” Clark says. Her book on Paris traces more than a century of transformations in the relationship between the city, photography, and history.

In the 19th century, for instance, many photos of Paris had a narrowly documentary purpose, but after World War I, they became objects of nostalgia, evoking better times. In the 1950s, with the city in relative physical disrepair, photos focused more on Paris’ working classes; the book concludes in the early 1970s, when the city sanctioned an amateur photography contest with 100,000 entries.

Remarkably, Clark has looked at about 15,000 of those photos. But no scholar has time for an entire archive that size. That’s one reason Clark founded the “This Was Paris in 1970” project at MIT, as the fall 2020 faculty fellow with the MIT Programs in Digital Humanities. Clark and an interdisciplinary group of students have been applying machine-learning techniques to help scholars search through photo archives.

Bathing in the culture

Clark is also taking an expansive approach to her book about France and communist China after 1949. Some scholarly work in this area has focused on left-wing French intellectuals affiliated with the journal Tel Quel, which endorsed Maoism in the 1970s. Some of those figures, including essayist Roland Barthes and scholar Julia Kristeva, even made a high-profile mid-1970s trip to China, before eventually splitting with Maoism.

Clark is not ignoring those thinkers, but her book has a wider lens, examining perceptions of China in popular culture, transmitted through many cultural artifacts.

“It will tell us about the culture that they are bathing in, and about political engagement by many types of people,” Clark says.

That includes a study of the photos of Cartier-Bresson, film projects, and, yes, even Mao jackets, a true item from the 1970s time capsule that was re-exported to the world by La Compagnie Française de l’Orient et de la Chine, a Parisian operation founded by businessman François Dautresme.

“If you want your straw hat or your Mao jacket, you’re buying it from Bloomingdale’s, who bought it from François Dautresme,” Clark says.

All of this, Clark emphasizes, is bound up with the fact that France, with its colonies liberating themselves, was “trying to position itself as a third way between communism and the U.S … and trying to compensate for its diminishing role in the world.”

To truly understand visual culture, after all, it helps to have the bigger picture.

Examining the French stage during the Enlightenment and French Revolution

Civil rights in a complex world