Civil rights in a complex world 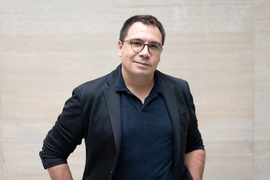 Caption:
“Being a teacher was something I wanted from the youngest age,” says Cynthia L. Reed Associate Professor of French Studies and Language Bruno Perreau.
Credits:
Image: Bryce Vickmark

For as long as he can remember, Bruno Perreau hoped to teach others.

“Being a teacher was something I wanted from the youngest age,” says Perreau, recalling his childhood in France. That wish has come true: Perreau taught for a decade in the French university system and is now the Cynthia L. Reed Associate Professor of French Studies and Language at MIT.

But Perreau is also an accomplished researcher with two well-received books to his name in English, and several other books and edited volumes to his credit in French. In France, he worked as an activist while entering academia. As an intellectual he has weighed in on public debates, especially those involving adoption policy and gay rights.

In short, Perreau is many things at once: teacher, scholar, author, public commentator. That seems fitting, because, as Perreau wrote in one of his books, people tend to “combine several types and levels of identity” in modern life. Indeed, much of Perreau’s work is about how personal identity interacts with states and institutions.

For instance, Perreau’s 2014 book, “The Politics of Adoption,” examined restrictive policies that limited adoption rights in France for much of the postwar era, and his 2017 book “Queer Theory: The French Response” was a close look at the intellectual landscape surrounding France’s 2013 law that opened marriage and adoption to gay couples.

In that case, as Perreau wrote in the book, states should recognize “the multipositional nature of minorities” in society. As he notes, one can be, for instance, gay, black, and a parent at the same time, and such identities vary considerably, depending on the person and circumstances. Accounting for such considerations may seem straightforward, but in practice can be a major challenge for the law.

To answer this challenge, France has long propounded a blanket universalism that formally downplays social differences. In some ways, this has helped France establish principles of equality. In others, this “logic of unity,” as Perreau calls it, has made it harder for the French to construct equal rights while explicitly acknowledging particular social differences.

On the other hand, the institution of academia is often structured to let people take on multiple roles at once. Thus, for his scholarship, teaching, public engagement, and more, MIT granted Perreau tenure in 2017.

“They invested everything in me”

Perreau grew up in Chalon-sur-Saône, France, in the southern part of Burgundy. His mother was a teacher. Growing up, Perreau was one of the few children in an extended family of modest means, and received strong moral support from relatives who wanted him to succeed.

“They didn’t have much social capital, but they invested everything in me,” Perreau says. “And they tell you, ‘You’re going to do great things,’ and you end up believing it. And you don’t want to disappoint them.”

Meanwhile, Perreau found that as a good student, classroom success had unexpected benefits.

“As a kid, when I was 7, 8, 9 years old, I would be asked by younger kids to teach them things in school,” Perreau says. “When I was 11 years old, at night, the other kids would call me and say, ‘Can you tell me, how should I understand this math problem?’ It was great for me. I really enjoyed doing this. It gave me a social identity that made me a little different, a little more likeable. … It was probably a way for me to avoid some bullying as an effeminate boy. I partially managed to avoid that, but not fully.”

Indeed, as Perreau sees it, this helped shape his long-term identity: He could become a strong student without acute worries about conforming to the crowd. As such, he kept earning scholarships that took him through school, then to college at the Institute of Political Studies (Sciences Po) in Lyon, and to a master’s program at Loughborough University in England.

At the time, Perreau was studying political institutions broadly. “How institutions work, how they help us, because we don’t have to redefine the rules of the game every time, is fascinating to me,” he says. Before he continued his studies, though, Perreau moved to Paris and became an LGBT activist, and instantly liked it.

“Suddenly I was surrounded by people involved in the same struggle,” Perreau says. But he also decided to pursue a PhD, at the University of Paris 1, the Panthéon-Sorbonne. There, Perreau took an inspiring class on the history of political ideas in relation to parity laws, gender, and more, taught by Evelyne Pisier, which steered him in a new direction.

“It was a total revelation for me because I had no idea that my own personal experience, combined with activism, could also resonate in the university system,” Perreau says. Closely examining how institutions and forms of civil rights evolve, Perreau got his doctorate and took a job at Sciences Po Paris, until he joined MIT in 2010.

Perreau’s activism and scholarship have continued to intersect as his career has unfolded. His activist work — combined with the efforts of many others, he notes — helped open up the discussion that ultimately led to France’s 2013 law on civil unions. This has made him exceptionally well-placed to write about the subject and to comment publicly about state policy, in newspaper opinion pieces and on television and radio.

Whatever progress that law represents, Perreau is hardly complacent about it. In “Queer Theory: The French Response,” he elaborates on the idea that citizenship itself does not come from universal norms. Rather, Perreau writes, “a feeling of belonging stems from a challenge to, rather than a sanctification of, the social order.”

At any given time, a legal code will not “fully grasp reality,” as he puts it. A challenge for citizens, then, is to identify the mismatches between laws, norms, and complex reality. In this sense citizenship exists in a state of tension with the established order, not by conforming to it.

Currently this idea is the center of one of the books Perreau is now working on, about “minority democracy.” By that, Perreau says, he means “how we can develop systems of representation and presence for minorities in the public space that do not require them to abandon who they are.”

If citizenship is about seeking to improve our systems of governing, then Perreau’s work helps identify him another way: as a citizen. It is one more descriptor to add to the list, along with activist, scholar, and, yes, teacher.