Asegun Henry has a big idea for tackling climate change: Store up the sun

“This is the key, the linchpin that will set a lot of things in the right direction,” says the mechanical engineering professor.
Jennifer Chu | MIT News Office
Publication Date:
Press Inquiries 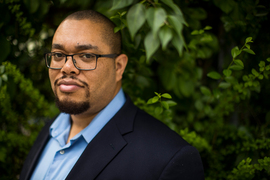 Asegun Henry has a bold idea to save the world. He believes the key to reducing carbon emissions, and mitigating further climate change, lies in our ability to box up the sun.

Today, much of the renewable energy that’s captured from the wind and sun is delivered in a use-it-or-lose-it capacity. To store such energy, Henry envisions a completely sustainable, zero-carbon grid with the potential to supply all our electrical needs, even on overcast and windless days. And he has a blueprint for how to get there.

Imagine, alongside solar plants and wind turbines, a heavily insulated, warehouse-sized container filled with white-hot liquid metal. Any excess energy captured during low-use times would be diverted into this container, where it would be converted into heat. When energy demand goes up, the liquid metal could be pumped through a converter to turn heat back into electricity.

Henry says this “sun-in-a-box” system would serve as a rechargeable battery, albeit one that takes up half a football field. He has shown that key parts of the system work, and is bringing those parts together to demonstrate a lab-scale system. If that proves successful, he will push ahead to versions with increasing storage capacity, and ultimately, to a commercial-scale, grid-integrated system.

It’s an ambitious road, and one that has not been without hurdles, much like Henry’s own path to MIT. In 2020, he was granted a faculty tenure position in MIT’s Department of Mechanical Engineering, and is funneling much of his energy into storing up the sun.

“In my view, the choice to go to MIT was a path toward saving the human race,” Henry says. “I believe in this technology, and that this is the key, the linchpin that will set a lot of things in the right direction.”

Henry grew up in Sarasota, Florida, then in Tallahassee, where he became a drummer. His parents, both professors at Florida A&M University, made every effort to instill in him an appreciation of his family’s West African roots. When he was 10, his mother brought him to an African dance class at the university.

“I had been taught to revere African culture, but never had really seen or heard it, and I totally fell in love with the drums that day,” Henry says.

For the next six years, he joined a professional touring ensemble and devoted himself to African drumming. He was 16 when he decided to forgo a drumming career, after seeing his teachers’ financial hardships. Around that time, he took part in a rites-of-passage program for young Black men, where he met mentor Makola Abdullah, a professor of civil engineering at Florida A&M. Abdullah hired Henry as a young assistant in his lab, where the team was studying the structure of the Egyptian pyramids.

“That really turned things on for me,” Henry recalls. “I was getting paid to do technical work for the first time, which was exciting at that age.”

As an undergraduate at Florida A&M, Henry continued working in Abdullah’s lab, on a study of earthquake-induced vibrations. He also became interested in vibrations at the atomic scale, and the motion of atoms in the context of heat, which led him to apply to graduate school at MIT.

Henry’s experience at MIT was academically intense, at times financially uncertain, and overall, socially isolating, he says, noting that at one time he was the only Black engineering graduate student in the department.

“That [isolation] motivated me, and I was on a mission to get my degree,” he says.

Henry pushed on, working with his advisor to develop molecular dynamics simulations of heat conduction, and received his master’s and PhD in mechanical engineering in 2009. He then accepted a faculty position at Georgia Tech, but before settling on campus, he took up three consecutive postdocs, at Oak Ridge National Laboratories, Northwestern University, and the Department of Energy’s Advanced Research Projects Agency-Energy, or ARPA-E.

Each postdoc helped to crystallize his own research goals. At Oak Ridge, he learned to do electronic structure calculations. At Northwestern, he got into renewable energy, simulating promising solar-thermochemical materials. And at ARPA-E, a division that was designed to support high-risk, high-reward projects, he learned to think big.

“I visited Jurassic-sized machine shops where they build the largest turbines in the world, and also toured concentrated solar plants,” Henry says. “That was a transformative experience, and I started getting interested in systems-level design.”

He returned to Georgia Tech with a risky idea for a new kind of concentrated solar power (CSP). Most CSP designs are based on the idea of storing heat as molten salt,  and moving the liquid through metal piping and pumps to convert into electricity. But there is a limit to how hot the salts can get when storing heat. Temperatures higher than this limit could also cause metal pipes and pumps to corrode too quickly.

“I was interested in pushing this to the extreme, to see how to get a step change in performance,” Henry says.

He proposed making pipes and pumps out of more heat-resistant ceramics, and storing heat not in molten salt, but in glowing, white-hot liquid metal.

“It was a radical idea, and based on the physics, it’s sound,” Henry says.

He and his students worked for years to demonstrate a key component of the system, a high-temperature ceramic pump, at first with little progress.

“I used to have to give these coach-in-the-locker-room speeches to keep everyone motivated,” Henry remembers.

In 2017, their efforts paid off with a pump that could circulate liquid at up to 1,400 degrees Celsius. The demonstration earned them a publication in Nature, and a Guinness World Record for the “highest operating temperature liquid pump.”

“That escalated things,” says Henry, who at the time had received an invitation to interview for a faculty position at MIT. When he was offered the job, he wasn’t sure he could take it. While his work was moving forward, he was in the middle of a complicated divorce.

“I was at a difficult crossroads,” he says. “Do I stay, and possibly get custody of my kids, or do I double down on my career and go to MIT, where I think I have the best chance of pursuing this idea?”

In the end, Henry accepted the position and moved back to MIT in 2018. The divorce pushed him into bankruptcy, even as he was starting up a new lab and managing teaching demands on campus. It was a tumultuous year, but he eventually moved to Boston with his sons, and just before the pandemic set in, Henry was also awarded tenure.

“It’s a dramatic relief for me,” Henry says. “After risking it all to come here, you want that security that things will work out.”

He is forging ahead to improve the sun-in-a-box system, and has since bested his record with an even higher-temperature pump. He’s also continuing to simulate the motion of atoms in different materials and is converting those motions into sound — a project that was partly inspired by his early experience in music.

Of the new balance he has found in work and life, he says: “It’s very grounding. And I’m thankful.”

The tenured engineers of 2020