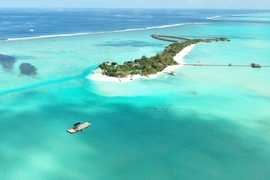 ↓ Download Image
Caption: In the lower left corner of this photograph, researchers prepare a submersible device. “Together with our collaborators in the Maldives, we are designing, testing, building, and deploying submersible devices that, based simply on their geometry in relationship to the ocean waves and currents, promote sand accumulation in specific areas,” says associate professor Skylar Tibbits.
Credits: Image courtesy of the researchers 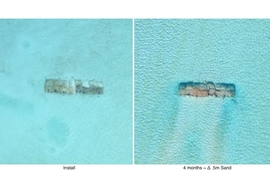 ↓ Download Image
Caption: The resulting project has now shown promising initial results, with a foot and a half of localized sand accumulation deposited in just four months.
Credits: Image courtesy of the researchers

Caption:
In the lower left corner of this photograph, researchers prepare a submersible device. “Together with our collaborators in the Maldives, we are designing, testing, building, and deploying submersible devices that, based simply on their geometry in relationship to the ocean waves and currents, promote sand accumulation in specific areas,” says associate professor Skylar Tibbits.
Credits:
Image courtesy of the researchers

Caption:
The resulting project has now shown promising initial results, with a foot and a half of localized sand accumulation deposited in just four months.
Credits:
Image courtesy of the researchers

Many island nations, including the Maldives in the Indian Ocean, are facing an existential threat as a result of a rising sea level induced by global climate change. A group of MIT researchers led by Skylar Tibbits, an associate professor of design research in the Department of Architecture, is testing ways of harnessing nature’s own forces to help maintain and rebuild threatened islands and coastlines.

Some 40 percent of the world’s population lives in coastal areas that are threated by sea level rise over the coming decades, yet there are few proven measures for countering the threat. Some suggest building barrier walls, dredging coastlines to rebuild beaches, or building floating cities to escape the inevitable, but the search for better approaches continues.

The MIT group was invited by Invena, a group in the Maldives who had seen the researchers’ work on self-assembly and self-organization and wanted to collaborate on solutions to address sea-level rise. The resulting project has now shown promising initial results, with a foot and a half of localized sand accumulation deposited in just four months. MIT News asked Tibbits to describe the new approach and its potential.

Q: People have been trying to modify and control the movement of sand for centuries. What was the inspiration for this new and different approach to rebuilding beaches and shorelines?

A: When we first visited the Maldives, we were taken to a local sandbar that had just formed. It was incredible to see the size of the sandbar, about 100 meters long and 20 meters wide, and the quantity of sand, over 1 meter deep, that was built completely on its own, in just a matter of months. We came to understand that these sandbars appear and disappear at different times of the year based on the forces of the ocean and underwater bathymetry. Local historians told us about how they would collaborate with the ocean, growing vegetation to expand their islands or morph their shape. These natural and collaborative approaches to growing land mass through sand self-organization came in stark contrast to the human dredging of sand from the deep ocean, which is also used for island reclamation. In the same amount of time that it takes to dredge an island, which takes months, we watched three different sandbars form themselves, through satellite imagery.

We started to realize that the amount of energy, time, money, labor, and destruction of the marine environment that is caused by dredging could likely be stopped if we could understand why sandbars form naturally and tap into this natural phenomenon of self-organization. The goal of our lab and field experiments is to test hypotheses on why sandbars form, and translate those into mechanisms for promoting their accumulation in strategic locations.

By collaborating with the natural forces of the ocean we believe we can promote the self-organization of sand structures to grow islands and rebuild beaches. We believe this is a sustainable approach to the problem that can eventually be scaled to many coastal areas around the world, just as forest management is used to help strengthen and protect forests from uncontrolled fires or overgrowth.

Q: Can you describe how this system works, and how it harnesses the energy of the waves to build up the sand in the places where it's needed?

A: Together with our collaborators in the Maldives, we are designing, testing, building, and deploying submersible devices that, based simply on their geometry in relationship to the ocean waves and currents, promote sand accumulation in specific areas. In our first field experiment we built bladders out of heavy-duty canvas, sewn together into the precise ramp geometries. With our second field experiment, we took the best designs from hundreds of lab experiments and had them fabricated from a geotextile membrane. In both experiments we filled the bladders with sand to weigh them down and then submerged them underwater. For our next field experiment we are building bladders that have internal chambers that act like a ballast in a submarine, allowing the bladder to sink or float and to be quickly moved or deployed. Each experiment is attempting to make the fabrication and installation process as simple and scalable as possible.

The simplest mechanism that we are testing is a ramp-like geometry that sits on the ocean floor and rises vertically to the surface of the water. To the best of our understanding, what we are seeing is that as the water flows over the top of the ramp it creates turbulence on the other side, mixing the sand and water and then creating sediment transport. The sand begins to accumulate on the backside of the ramp, continually piling on top of itself. We have tested many other geometries that attempt to minimize wrap-around effects, or focus the accumulation in specific areas, and we are continuing to search for optimal geometries. In many ways, these behave like natural depth variations, reef structures, or volcanic formations and may function similarly in promoting sand accumulation. Our goal is to create adaptable versions of these geometries which can be easily moved, reoriented, or deployed whenever seasons change or storms are increasing.

Since 2018 we have been conducting experiments in our lab at MIT in collaboration with Taylor Perron in [the Department of] Earth, Atmospheric and Planetary Sciences. We have built two wave tanks where we are testing a variety of wave conditions, sand behaviors, and geometries to promote accumulation. The goal is to align our lab experiments and models with real-world conditions specific to the two predominant seasons in the Maldives. We have done hundreds of tank experiments so far and are using these studies to gain intuition and insight into what mechanisms result in the greatest sand accumulation. The best of these lab experiments is then translated to field experiments twice a year.

Q: How were you able to detect and quantify the effects of your experiment, and what are your plans for continuing and expanding this project?

A: We have collected satellite imagery, drone footage, and physical measurements ever since installing our first field experiment in February 2019 and our second field experiment in October / November 2019. The satellite images and drone footage give us a visual indication of sand accumulation; however, it is challenging to quantify the amount of sand from those images. So we rely heavily on physical depth measurements. We have a series of coordinates that we send to our collaborators in the Maldives who then take a boat or jet ski out to those coordinates and take depth measurements. We then compare these measurements with our previous measurements, considering the day/time and relationship to the tide height.

With our latest field experiment, we have been collecting imagery and physical measurements to analyze the sand accumulation. We are now seeing roughly a half meter (about 20 inches) of new sand accumulation over an area of approximately 20 meters by 30 meters, since November. That is about 300 cubic meters of sand accumulation, in roughly four months. We see these as promising early results that are part of a much longer-term initiative where we aim to continue to test these approaches in the Maldives and various other locations around the world.

We have recently been awarded a National Geographic Exploration grant and plan to go back to the Maldives for two more field installations later this year and in 2021. Our long-term goal is to create a system of submersible structures that can adapt to the dynamic weather conditions to naturally grow and rebuild coastlines. We aim to scale this approach and tailor it to many locations around the world to help rebuild and stabilize heavily populated coastlines and vulnerable island nations.

Smart components that assemble themselves