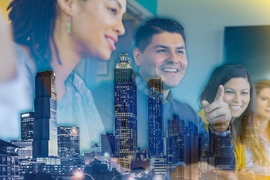 The great U.S. economic boom after World War II was an urban phenomenon. Tens of millions of Americans flocked to cities to work and forge a future in the nation’s middle class. And for a few decades, living in the big city paid off.

But those were different times. Since 1980, the U.S. landscape of work has changed “remarkably,” says MIT economist David Autor, who has produced a new study showing how much middle-paying jobs and incomes have receded in cities. From 1990 through 2015, the wage advantage for non-college workers in the most urban quartiles of the U.S. was chopped in half, with African American and Latino workers most affected by this shift.

“It used to be [cities] were a magnet for people who were less fortunate, fleeing discrimination or underemployment, and served as an escalator for upward mobility,” says Autor, the Ford Professor of Economics at MIT. But today, he adds, “urban workers without college degrees are moving into lower-paid services rather than higher-paid professional jobs. And the extent to which that is occurring is larger among Blacks and Hispanics.”

Even in the same locations, Blacks and Latinos are more affected by this shift. The wages of white workers without college degrees in the most urban quartile of the job market have risen slightly since 1980, compared to non-college workers in the least urban job markets. But for Black and Latino men and women without college degrees in those places, the reverse has happened.

“The urban wage premium has risen a bit for non-college whites, but fallen for everyone else without a college degree,” Autor says.

This wage stagnation also helps explain why many workers without college degrees cannot afford to live in big cities. Yes, home prices have soared and cities have not produced enough new housing. However, Autor suggests, “The change in wages alone would be sufficient” to price most non-college workers out of cities.

“The set of economically secure career jobs for people without college degrees has narrowed,” Autor says. “It’s a central labor market challenge that the Task Force is focused on: How do you ensure that people without elite educations have access to good jobs?”

What kinds of work?

To conduct the research, Autor drew on U.S. Census Bureau data and his own previous research examining the changing structure of urban labor markets in the U.S.

As Autor details in his report, in the U.S., as in most industrialized countries, employment has become increasingly concentrated in high-education, high-wage occupations, and in low-education, low-wage jobs, at the expense of traditionally middle-skill career jobs. Economists refer to this phenomenon as employment “polarization.” Its causes are many, rooted in both automation and computerization, which have usurped many routine production and office tasks; and in globalization, which has substantially reduced labor-intensive manufacturing work in high-wage countries. As polarization has advanced, workers without college degrees have been shunted out of blue-collar production jobs, and white-collar office and administrative jobs, and into services — such as food service, cleaning, security, transportation, maintenance, and low-paid care work.

That shift has mostly been felt by non-college-educated workers. More specifically, in 1980, 39 percent of non-college workers were in low-paying occupations, 43 percent were in middle-paying vocations, and 18 percent were in the high-paying, occupations. But by 2015, just 33 percent of noncollege workers were in the middle-paying occupations, a 10 percentage-point shift. About two-thirds of that change has moved workers into traditionally lower-paying jobs, occupations that require less-specialized skills. These jobs, accordingly, offer fewer opportunities for acquiring skills, augmenting productivity and pay, and attaining job stability and economic security.

A key finding of Autor’s work is that this change has been “overwhelmingly concentrated in urban labor markets,” as the paper notes. In the study, Autor analyzes 722 census-defined “commuting zones” (local labor markets) in the U.S. from 1980 through 2015, and finds that in the country as a whole, non-college urban workers with high school diplomas saw their wages fall by 7 percentage points relative to their non-urban equivalents; for urban workers who did not finish high school, the relative fall was even steeper, at 12 percentage points.

The jobs most affected are manufacturing and office clerical jobs, which have largely vanished from cities. As Autor’s study shows, these positions — along with administrative and sales jobs — made up a much bigger share of employment in cities than in non-urban areas in 1980. But by 2015, they represented a roughly equal share of employment in both urban and rural settings.

“Cities have changed a lot for the less educated,” Autor says. In the past, “non-college workers did more specialized work. They worked in offices alongside professionals, they worked in factories, and they were [performing jobs] they didn’t have outside of cities.”

Given the demographic composition of U.S. cities as a whole, any large shift in urban employment will affect African American and Latino populations, Autor notes: “African Americans and Hispanics are heavily represented in urban areas. Indeed, the Great Migration brought many African Americans from the South to Northern industrial cities in search of better opportunities.”

But as Autor’s study shows, African Americans and Latinos have lost more ground than whites with the same education levels, in the same places. Take again the top quartile of most-urban labor markets between 1980 and 2015. Among whites, Blacks, and Latinos, by gender, employment in middle-paying jobs among non-college workers declined sharply in this time period. But for white men and women, that employment decline was just over 7 percent, while for Black men and women and Latino men and women, it was between 12 and 15 percent.

Or consider this: Among workers with a four-year degree in the same urban settings between 1980 and 2015, the only group that saw a relative wage decline was Black men. In part, Autor says, that could be because even middle-class Black men were in more precarious employment situations than middle-class workers of other racial and ethnic groups, as of 1980.

“The black middle class … was more concentrated in skilled blue collar work, in clerical and administrative work, and in government service than non-minority workers of comparable education,” Autor says.

Still, Autor adds, the reasons for the relative decline may be deeply rooted in social dynamics: “There is no ethnic group in America that is treated more disproportionately unequally and unfairly than Black men.”

While no social circumstance that pervasive has easy solutions, Autor’s paper does suggest setting an appropriately calibrated minimum wage in cities, which would likely erase some of the pay gap between whites and Blacks.

“There’s a lot of evidence now that minimum wages hikes have been effective,” Autor says. “They have raised wages without causing substantial job loss.” Moreover, he adds, “Minimum wages affect Blacks more than they affect whites. … It’s not a revolutionary idea but it would help.”

Autor emphasizes that boosting wages through minimum wage hikes is not a cost-free solution; indeed costs are passed on to consumers in the form of higher prices, and sharp hikes may tend to put low-productivity employers out of business. Nevertheless, these tradeoffs may be appealing given the falling earnings power of workers without college degrees — who constitute the majority of workers — in U.S. cities.

The current research also suggests that the crisis of affordability in many cities is more than a shortage of affordable housing. While many scholars have criticized urban housing policies as being too restrictive, Autor thinks the problem is not just that workers without four-year degrees are being “pushed” away from cities due to prices; the relative wage decline means there is not enough “pull” being exerted by cities in the first place.

“Cities have become much more expensive, and housing is not the only factor,” Autor says. “For non-college workers, you have a combination of changing wage structure and then rising prices, and the net effect is making cities less attractive for people without college degrees.” Moreover, Autor adds, the eroding quality of jobs for non-college urban workers “is in some sense a harder problem to solve. It’s that the labor market has changed.”

Autor will continue this line of research, while also working on MIT’s Work of the Future project along with the other task force leaders — Executive Director Elisabeth B. Reynolds, who is also executive director of the MIT Industrial Performance Center, and co-chair David A. Mindell, professor of aeronautics and astronautics, the Dibner Professor of the History of Engineering and Manufacturing at MIT, and founder and CEO of the Humatics Corporation.

The MIT task force will deliver a final report on the topic this fall, having published an initial report in September 2019, which observed the economic polarization of the workforce, detailed technological trends affecting jobs, and contained  multiple policy recommendations to support the future of middle-class work.

The Economist spotlights a recent essay by Prof. David Autor and Elisabeth Reynolds, executive director of the MIT Task Force on the Work of the Future, about the impact of the coronavirus pandemic on the state of work. “If remote working proves a lasting shift, then the café staff, taxi drivers and cleaners who depend on their custom could find themselves out of work,” writes The Economist.

Fast Company reporter Kristin Toussaint writes about a new study by Prof. David Autor that finds middle class jobs for non-college grads are disappearing, particularly for Black and Latino workers. Autor suggest that higher minimum wages “are surprisingly effective at improving the incomes of workers in low wage jobs,” adding that “they don’t seem to have noticeable adverse effects on employment.”

Prof. David Autor has found opportunities for minority workers in cities have receded, particularly those without college degrees, reports Jonnelle Marte for Reuters. “As the middle hollowed out, (minority workers) were more exposed to middle-skilled work, and net of that, they were also over-represented at the low end and under-represented at the high end,” says Autor.

A study by Prof. David Autor finds that cities no longer guarantee middle-wage opportunities for Black and Latino workers, reports Andrew Van Dam for The Washington Post. "Changes in occupational structure, in cities, have been larger and arguably less favorable among Blacks and Hispanics than among whites," says Autor.

Bloomberg reporter Peter Coy writes that a new study by Prof. David Autor finds cities are no longer “escalators of opportunity” for people in middle-paying jobs, in particular Black and Latino workers. Coy writes that Autor proposes, “one solution is to raise minimum wages in cities, which would raise the living standards of low-income workers.”