Studying the brain and supporting the mind 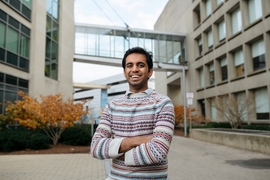 ↓ Download Image
Caption: “I feel supported and encouraged by everybody here and there’s not a barrier to me asking for help,” MIT senior Tarun Kamath says.
Credits: Photo: Ian MacLellan

Caption:
“I feel supported and encouraged by everybody here and there’s not a barrier to me asking for help,” MIT senior Tarun Kamath says.
Credits:
Photo: Ian MacLellan

“I’ve always been interested in science from a very young age, and my grandmother was actually a really big influence in that regard,” says Tarun Kamath, when asked about his academic inspirations. “She was a big believer in being very passionate and very good at what you might want to do.”

Kamath is a senior majoring in brain and cognitive sciences as well as a master’s student in biological engineering. As a child, he did sudoku puzzles with his grandmother in the mornings. He received a big sudoku book from her for his eighth birthday, along with encouragement to watch videos of sudoku champions in order to learn from the very best.

But when Kamath was in high school, his grandmother was diagnosed with atypical Parkinson’s disorder, and the “harrowing experience” of caring for a formerly vigorous and passionate woman became inspiration of a different sort, he says.

“My family and I struggled to get access to the care she needed, spending months navigating the Medicaid system to afford her medications. Her doctors prescribed her more pills and patches, and yet when I talked to her she still confused me with my brother, her brother, even her neighbor,” Kamath wrote in a recent scholarship essay. “Maddeningly, from a glance, she seemed healthy, but internally, her mind, her independence, even her personality, was slipping away. I was shocked and frustrated by the inadequacy of available medical options and the difficulty we had accessing them. What was the point of medicine if it couldn’t help the people I loved?”

At MIT, Kamath’s research has focused on neurodegenerative disease biology in Bradley Hyman’s Lab at Massachusetts General Hospital, looking at toxic aggregations of the tau protein in Alzheimer’s disease. He has been working in the lab since the end of his first year. The 20-minute bike ride up the river to Mass General has been worth it, he says. “There’s a ton of amazing biomedical research happening around Boston, but what’s really special about a lab is the culture. It’s not just about what work you’re doing but it’s about the people that you do it with.”

The lab has provided him with mentorship, the independence to start new projects, and most importantly, the ability to fail. “Especially as a student, it’s important to be in a place that not only encourages results but is accepting of failure, because 99 percent of science is failure,” Kamath explains. “I got lucky with this lab, and with what I’ve been able to learn about a field that is very personally relevant to me.”

Since leaving campus in response to the Covid-19 pandemic, Kamath has been writing his master’s thesis and wrapping up some of his research projects, along with trying to keep his mind and body active. “I've been trying to watch videos to learn about topics I've been interested in but never had time to fully explore. I’m also video-calling and messaging many of my friends who are now scattered, to check in and see how they are all doing,” he says.

Kamath is considering an MD/PhD program after graduation, in part because he wants to continue in research and because working closely with the neuropathology department at Mass General has helped him realize the “importance of the interplay between science and medicine.”

His experiences with his grandmother, along with a key first-year class at MIT, also opened his eyes to the important role of health policy alongside the lab and the clinic. In the class 17.309 (Science, Technology and Public Policy), “we talked about a lot of case studies, and in lots of them people are not communicating effectively,” Kamath explains. “What was really fascinating was learning that yes, there is science, but science doesn’t translate into tangible things that can help people until the policy aspect happens.”

“That’s sort of been a continuing theme of my MIT education, that you come into college with this preconceived notion of how systems work,” he adds, “and that can be small-scale, like how cells work, or it could be macroscale, like how countries work. And then you take classes and you realize that things are just way more complicated.”

Over the summer of 2018, Kamath was an intern in the U.S. House of Representatives Committee on Ways and Means, as part of the MIT Washington, D.C. Summer Internship Program. He helped analyze bills and draft memos on methods to reduce fraud, waste, and abuse in Medicare, among other tasks.

“There’s the old joke, that the opposite of progress is Congress, but there are a ton of things happening there. It was very encouraging, the constant back and forth and refining of ideas,” he says. “And from that I’m more willing to hear multiple sides of an argument in general, after that.”

From 2017 to 2019, Kamath served as president of the MIT chapter of Active Minds, a national mental health organization. There had been a chapter of the group at his high school, and he sought it out when he came to MIT “because I resonated a lot with their goal,” he says. Other peer support groups on campus “are sort of first aid for mental health. Somebody has a really stressful day and the peer supporter is there to help them through or to help them find a counselor if the stress is chronic,” he explains. “Active Minds is trying to prevent that day from happening in the first place. We try to encourage an environment in which people are less stressed or if they are stressed, to go talk to somebody.”

College-age students have high rates of mental health disorders but one of the lowest rates of seeking help for those disorders, he adds. “There’s this huge disparity between what people are experiencing and what they tell other people they are experiencing, and so Active Minds tries to bridge that gap.”

Kamath has never forgotten the support he received as a first-year from his Zeta Beta Tau fraternity class father, when he was having a “meltdown” over a differential equations assignment. “I didn’t even have to think about it, I just went to my class father’s room,” he recalls, “We chatted for a while and walked to the 24/7 Star Market to buy a couple of cold brew coffees. That had a big influence on me.”

“I feel supported and encouraged by everybody here and there’s not a barrier to me asking for help. And that’s a culture that I wanted to continue and cultivate my junior year,” by becoming class father himself, Kamath says.

One of the new things Kamath tried out when he first came to MIT was bhangra, the high-energy and competitive Punjabi folk dance. When he came up to the campus for a preview weekend in high school, a member of Mirchi, MIT’s Bollywood fusion dance team, invited Kamath to one of his workshops. Kamath attended, although he had never danced before, and was hooked. He became a member of the MIT Bhangra Dance team for two years.

“I had been kind of afraid of performing, but it’s super-liberating, because in bhangra, it’s all about those seven minutes,” he says. “Win or lose, you put everything you’ve got into those seven minutes that you have on stage to perform, and you have to leave it all behind there. It’s an adrenaline rush!”