Weekly calls keep students connected to the Institute during a pandemic

Through the MIT Student Success Coaching program, volunteer faculty and staff check in with students to assist with whatever “bubbles up.”
Amy MacMillan Bankson | MIT Sloan School of Management
Publication Date:
Press Inquiries 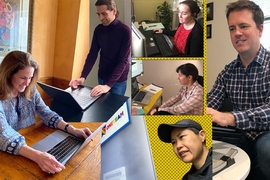 ↓ Download Image
Caption: MIT’s Student Success Coaching program pairs students with volunteer “coaches,” who check in with them once a week through the end of the semester to see how they are transitioning to online learning and more generally, how they are doing during the COVID-19 crisis.
Credits: Image: Courtesy of MIT’s student success coaches

Caption:
MIT’s Student Success Coaching program pairs students with volunteer “coaches,” who check in with them once a week through the end of the semester to see how they are transitioning to online learning and more generally, how they are doing during the COVID-19 crisis.
Credits:
Image: Courtesy of MIT’s student success coaches

When the MIT campus is alive, it nearly sings with innovation and excitement. Students sustain one another with activities ranging from building in makerspaces to psetting in residence halls to pick-up soccer games on the fields. But how can they remain connected during a pandemic, where physical distancing is the new normal? What can replace the informal chats with faculty members after class? Throw in remote learning — and the Infinite Corridor seems infinitely far away.

Enter the MIT Student Success Coaching program, a new initiative for keeping students “connected to the Infinite.” The program, launched by the Division of Student Life (DSL) and the Office of the Vice Chancellor (OVC), matches students with volunteer “coaches,” or staff or faculty members from several areas of the Institute. In many cases, the coaches may be already known to students through their “day jobs” as athletic coaches, support professionals, or faculty members.

Coaches are assigned anywhere from one to 20 undergraduate students who they will connect with once a week through the end of the semester to see how they are transitioning to online learning and more generally, how they are doing during the Covid-19 crisis. Participating students receive weekly check-ins conducted over Zoom, FaceTime, or even via phone or email.

The program emerged in response to a request from Suzy Nelson, vice president and dean for student life; Ian Waitz, vice chancellor for undergraduate and graduate education; and Krishna Rajagopal, dean for digital learning. The program’s co-chairs are Lauren Pouchak, director of special projects in the OVC; Gustavo Burkett, senior associate dean for diversity and community Involvement in DSL; and Elizabeth Cogliano Young, associate dean and director of first year advising programs in OVC.

Cogliano Young says there are now more than 500 volunteer coaches matched with approximately 4,400 undergraduate students. The program is also open to MIT’s graduate students but it serves a smaller number “since many graduate students may already have regular meetings with advisors,” Pouchak says. The team worked to identify programs where graduate students could benefit from an opt-in coaches program.

Listening is number one

One of the co-chairs’ first tasks was developing a training for the volunteers. They turned to colleagues across the Institute, including Rajagopal, who spoke at the first hour-long virtual training session. In it, he emphasized that the coaches are not meant to replace academic advisors or the student support professionals who work for Student Support Services and GradSupport.

“The number one thing to do is to listen, listen, and listen,” Rajagopal said.

Susanna Barry, senior program manager at MIT Medical, also spoke at the training, and encouraged coaches to empower students to solve their own problems. To that end, a Slack group was formed where coaches can interact with one another and the program co-chairs can share what they are hearing from students, brainstorm approaches to addressing challenges, and develop new ideas for strengthening student connections to the Institute during this period of remote learning.

Pouchak said the Slack channel feedback has meant that issues that have “bubbled up” can be addressed in real-time. For instance, many students reported having trouble sleeping and managing their time while they are off campus. Working with Barry, the co-chairs and a group of “super coaches”  (staff who have particular expertise and experience and work to support students on a daily basis) introduced several new Zoom workshops on topics such as sleep and time management, which include tips such as don’t hit the snooze button and try to get some sunlight before noon every day.

Rachel Shulman, undergraduate academic coordinator for the MIT Energy Initiative, who has been matched with 18 undergraduate students, was eager to share insights with her fellow coaches. She says after initial conversations with several students, she noticed that many have found it hard to stay focused.

“Everyone is distracted, and everyone is having trouble focusing on their lectures, and some are putting pressure on themselves to do as well as they were doing before,” Shulman says. And while some of Shulman’s students have reported they are doing well with the transition to virtual learning, they still appreciate hearing from someone at MIT.

Shulman tells students that the weekly coaching sessions can be whatever students want them to be.

“I’ve told them that if they have specific goals, I can try to help them figure out how to achieve them, or I can connect them with resources. I had one student ask me about the career fair, and it was so great because there’s a Slack channel for the MIT coaches … and I was able to Slack one of them while I was on a Zoom call with the student [so I could answer the student’s question],” Shulman says.

Having a human node in the network

Luke Hartnett, a senior in mechanical engineering, was skeptical of the coaching initiative at first. But, after his first conversation with his coach, he realized that he appreciated the extra support — especially after his 90-year-old grandmother was diagnosed with Covid-19.

“[My coach] was very helpful in talking me through how to deal with school … and planning out for the rest of the semester. Everyone is dealing with something, so I think it’s nice that MIT thought of this unique way to support students,” Hartnett says.

Junior Alex Encinas, another mechanical engineering major, says time management at his home in Houston has been a struggle. He’s committed to following the same schedule that he would have had if he were still on campus, even though he has the option of watching his lecture recordings any time. He says he’s adjusted well to the new routine, but while speaking with his coach, “things started flowing out that I didn’t even know were bothering me … and we just talked through them. It was calming for me,” he says.

Devan Monroe, assistant dean for professional development programs in the Office of Minority Education, says that students are using the program in the way that suits their needs.

“I’ve heard back from five students so far. Most have felt they were in a good place and don’t need the weekly check-ins. I’ve had others who have opted in and requested biweekly meetings rather than weekly,” he says.

Marshall says about 90 MIT Sloan staff members volunteered to be matched with MBA students. The students can opt out if they feel they don’t need the extra support. Although every MBA student is already matched with an MBA program advisor, Marshall says that the closure of physical MIT offices prompted the MBA program office to keep the lines of communication open with weekly check-ins because everyone is now remote.

“Students often meet with their advisors because they have an academic or policy question. Once we start talking about that topic, they may feel more comfortable moving into a more personal conversation, whereas they wouldn’t have necessarily led with that. Since we don’t have that nuanced ability to interact with students during this time, we thought that creating a calling plan was important,” Marshall says.

Marshall also encouraged MIT Sloan volunteers to participate in the Institute-wide Student Success Coaching program and has directed them toward the training and support information that the program provided.

“We can’t always resolve students’ concerns in the moment. But … even if there’s not a concrete solution to a problem, connecting with someone, talking through options, and learning about resources can really help. We are all here to support our students,” Marshall says.

One unexpected benefit from the weekly check-ins: Coaches are also reporting that the communication is inspiring them and forging new connections with colleagues. Shulman formed a virtual knitting group on the Student Success Team Slack channel and about a dozen people attended the first two sessions.

“In addition to the advantages to the students, the coaches have found community with one another which has become a tremendous resource,” says program co-chair Burkett. “In my opinion, the program has become a real-life example of the idea of ‘One MIT.’”

The MIT Student Success Coaching program is open to any volunteers from MIT, and there are still some graduate students without coaches. To volunteer, email the co-chairs at studentsuccess@mit.edu.

Building and reconnecting MIT in Minecraft