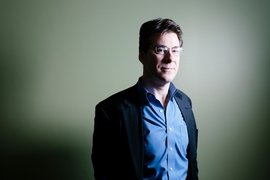 ↓ Download Image
Caption: Jonathan Parker PhD ’96, the Robert C. Merton (1970) Professor of Finance at the MIT Sloan School of Management, is a leading expert in understanding how U.S. citizens use stimulus payments from the government, and how big an impact such efforts make on the national economy.
Credits: Image: M. Scott Brauer

Caption:
Jonathan Parker PhD ’96, the Robert C. Merton (1970) Professor of Finance at the MIT Sloan School of Management, is a leading expert in understanding how U.S. citizens use stimulus payments from the government, and how big an impact such efforts make on the national economy.
Credits:
Image: M. Scott Brauer

The Covid-19 pandemic is a public health crisis with enormous economic implications: As much of the U.S. reduces daily activity in spring 2020, unemployment is already surging and experts are forecasting major drops in GDP during the second quarter of the year. U.S. Congress has also just passed a $2 trillion aid package for individuals and businesses.

To assess the current state of the economy, MIT News contacted Jonathan Parker, the Robert C. Merton Professor of Finance at the MIT Sloan School of Management. Among his other areas of research, Parker is a leading expert in understanding how U.S. citizens use stimulus payments from the government, and how big an impact such efforts make on GDP and the macroeconomy.

Q: What are the particular effects of the Covid-19 pandemic on the economy, and how should economic policy be used to respond?

A: Unlike in the typical recession, the main responsibility of our government today is not directly economic policy. First and foremost, we have to focus on winning the medical war against the virus. This not only saves lives, but is also the best way to help the economy. However, the war hasn’t gone well at this point, and for good public health reasons we have shut down large parts of our economy. People are not going to work, producing goods, and earning income, and people are avoiding the types of consumption that would put them in crowded places. So, there is going to be a huge collapse in GDP and national income.

Q: The U.S. Congress just passed a $2 trillion aid package to help compensate for the drastic economic slowdown. To what extent can such policy measures maintain incomes?

A: There is no way for us to make up the lost income, because we have lost it by not producing the goods and services that earn it. That said, we can transfer money to people so that the most vulnerable people don’t lose access completely to the goods and services that we do have. And that is part of what House and Senate leaders have just done in passing the recent relief package. The bill includes what are now being called “stimulus payments” to send around $1,200 out to American households. [The package also includes enhanced unemployment insurance for many people, as well as other aid for people adversely affected by the shutdown.]

While this is called stimulus, it is better thought of as disaster insurance for now. We don’t want the economy stimulated. People should be staying home. But the hardest hit need to be able to pay bills and eat. Ideally, we would freeze time for the period when we are isolating, to limit the spread of the virus and allow the government to catch up with the production of virus-wartime medical supplies like ventilators and masks and test kits, so that we can move from isolating all of us to isolating only the sick. And then having frozen time, we would restart the economy where we were before. Sending out checks to people allows those at the bottom of the income and wealth distribution to survive this freeze, and is part of restarting where we left off.

Q: Don’t we need to give significant funds to businesses for the same reason?

A: No, and yes. Starting with “no,” we don’t have to give funds to large firms, or even make them favorable loans. In the American economic system, when large companies that are profitable in the long run go bankrupt, they continue to operate and employ Americans, and emerge from bankruptcy sometimes stronger than before. This happened for General Motors in the financial crisis, and American Airlines operated for years in bankruptcy. For large companies, bankruptcy is only about the division of profits between stockholders and bondholders, not about whether the company continues to operate, so loans and transfers to large corporations almost exclusively benefit the stockholders.

U.S. stocks are owned by the very wealthiest people all over the world, and I think it is a mistake for the stimulus program to be transferring money from taxpayers to the world’s wealthiest people right now (or any time). The parts of the $2 trillion bill that are for supporting large firms are incorrectly fighting the last war. In 2008, the government supported banks because they were all threatened and, like Lehman Brothers, they cannot survive bankruptcy. So, this aspect of the current legislation is a mistake.

But there is an important answer of “yes,” also. First, in crisis times, there is a large increase in the demand for money and safe money-like assets so that financial markets can function. The Federal Reserve is tasked with providing the money and money-like assets that are appropriate with the demands of businesses, and it is doing this nicely. This type of support makes the taxpayer money, so it’s a win-win situation, not a bailout. Of course, this legislation also has the Treasury involved and is supporting private bond markets, and while this can also help, we have to look more closely at what is and is not a subsidy from taxpayers to stockholders of big firms, rather than an aid to the economy.

Prof. Jonathan Parker speaks with Boston Globe reporter Tim Logan about how federal stimulus checks will help serve as a financial safety net for many recipients. “The purpose now is to make sure people survive,” says Parker. “We don’t want people going back to work right now.”

Supply chain outlook: Why the situation varies by industry