Supply chain outlook: Why the situation varies by industry 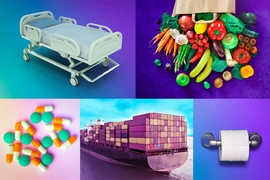 ↓ Download Image
Caption: “People are worried about the food supply chain,” says MIT supply chain expert Yossi Sheffi, who is the Elisha Gray II Professor of Engineering Systems at MIT, a professor in MIT’s Department of Civil and Environmental Engineering, and director of the MIT Center for Transportation and Logistics. “However, the U.S. food supply chain is very robust.”
Credits: Image: Jose-Luis Olivares

Caption:
“People are worried about the food supply chain,” says MIT supply chain expert Yossi Sheffi, who is the Elisha Gray II Professor of Engineering Systems at MIT, a professor in MIT’s Department of Civil and Environmental Engineering, and director of the MIT Center for Transportation and Logistics. “However, the U.S. food supply chain is very robust.”
Credits:
Image: Jose-Luis Olivares

With the Covid-19 virus disrupting the global economy, what is the effect on the international supply chain? In a pair of articles, MIT News examines core supply-chain issues, in terms of affected industries and the timing of unfolding interruptions.

By now, the media images are familiar: empty shelves in large markets where shoppers have loaded up on food, toiletries, and medicine. Many people, if they can afford it, have bought large quantities of goods to avoid repeated trips into public, in line with their state and local government guidelines. But others may be simply spooked by the unknown: Will we run out of the things we need?

From the U.S. perspective, it depends what those goods are, according to MIT supply chain expert Yossi Sheffi. While nothing is certain, the availability of food is less of a concern in the U.S., in supply-chain terms, while access to medical supplies is a much more problematic issue.

“People are worried about the food supply chain,” says Sheffi, who is the Elisha Gray II Professor of Engineering Systems at MIT, a professor in MIT’s Department of Civil and Environmental Engineering, and director of the MIT Center for Transportation and Logistics. “However, the U.S. food supply chain is very robust. There is unbelievable panic buying, but if you go to the [major chain] stores in the morning, most of them are well-stocked.”

That robustness is due to multiple factors, Sheffi notes. The U.S. supply chain is mostly domestic, because most of its producers are domestic. It is also organized around a relatively smaller number of wholesalers, who have the flexibility to expedite orders to large retailers as well.

“The great thing for the United States is that most of its food is procured within the United States,” Sheffi adds. “Some is procured from Latin America, which is not suffering badly and still sending ships.” Already, Sheffi says, there are cases of food wholesalers and adjusting orders to meet consumer demand. So while there is a chance, Sheffi notes, that the U.S. could “go through some shortages” in some areas, the industry as a whole is not a sector where supply-chain experts have focused their concerns.

For similar reasons, bulk purchases of toilet paper in the U.S. are not logistically vital, Sheffi observes. “The run on toilet paper is unexplainable,” he says. “This is a totally American-made product. Wood is grown in the United States. In fact the United States is exporting wood.” Even accounting for consumers’ desire to reduce shopping trips, Sheffi suggests there is likely a psychological factor at work: “It’s the need to get some semblance of control.”

Medical devices: Can manufacturing scale up?

Instead, Sheffi notes, the primary concern involves medical devices and medical supplies, which are not only produced using global supply chains, but have increasingly become dependent on China, where the Covid-19 virus struck first.

“The thing I am worried about is medical first responders and hospital supplies, in terms of even protective gear and masks,” Sheffi says. “And a lot of the intermediate goods used to make antibioics and other products are made in China.” That has been the case, Sheffi notes, for over a decade.

Medical products from China, he adds, cannot easily be substituted using products from elsewhere, because they “are not only low-cost, they’re very good. So it’s not easy to replace a supply that has high quality and low cost. And now we see the unfortunate consequences of this.”

Already, hospital leaders, public-health experts, and state authorities have been warning about imminent shortages, especially regarding ventilators for patients, and masks for medical professionals and the public — in addition to the need for increased production of Covid-19 tests. Some health care providers are now resorting to ad hoc measures to provide masks, and openly seeking donations of such materials.

And while the U.S. is now beginning to increase test production, with some major pharmaceutical companies beginning to expand the supply, the issue of scaling up production of ventilators, needed to help patients breathe because Covid-19 can attack the respiratory system, will not be an easy process.

“A ventilator is a sophisticated machine,” Sheffi says. “Companies cannot very quickly move to start making ventilators.” Companies such as 3M and GE Healthcare have stated that they are increasing ventilator production. However, he suggests, companies “who make real, industrial-strength goods” could also explore the rapid application of 3D printing for ventilators, and some manufacturers might adjust their production processes to make other, less complicated items.

“In World War II, the Ford Motor Companty was even making tanks and airplanes,” Sheffi says. “We should redeploy the incredible manufacturing capacity in the United States and put it to good use making beds, protective gear, masks, and more. Some of these things are relatively easy to make.”

Moving beyond the outlook for particular industries, Sheffi has a series of principles for firms to follow at moments when there is a potential supply-chain crisis. He thinks big companies should have an emergency-management center with clear rules of decision-making authority; set priorities about which products to focus on if manufacturing is constrained; review all their suppliers to identify where all parts of products originate; focus on actions that generate cash flow; and communicate with government authorities

“Companies like Intel, Proctor and Gamble, GM, and Walmart are very well-prepared” for a supply-chain crisis, Sheffi says. “They have a whole protocol about who makes decisions.”

From the outside, people may not realize how many suppliers multinational firms may have; identifying the status of all the components needed to make a product is a nontrivial task. For instance, as Sheffi details in “The Power of Resilience,” his 2015 book about supply-chain shocks, Intel had four layers of suppliers it needed to examine after the 2011 Fukushima tsunami and nuclear accident in Japan. (Sheffi also details these issues in a 2005 book, “The Resilient Enterprise.”)

Still, even the most prepared companies can be vulnerable to unexpected shocks. China is recovering from its initial wave of Covid-19 cases, centered in the city of Wuhan. However, Sheffi notes, there is no guarantee that Covid-19 will not re-emerge at some point as well, meaning that companies have to be prepared to make adjustments for a significant period of time.

For more on the connection between China and global manufacturing, see our other story about the Covid-19 crisis and supply chain.

Writing for The Wall Street Journal, Prof. Yossi Sheffi about how governments can address shortages of health-care equipment. “The U.S. must keep a very large, centrally-managed inventory of health-care supplies in several locations around the country to supplement the inventory maintained at each hospital,” says Sheffi. “The parallel here is the strategic oil reserves.”