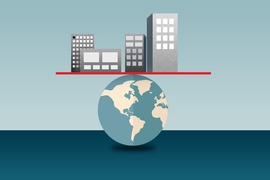 Companies large and small globalize their enterprises in search of advantages, such as lower costs, flexibility, and closer proximity to key markets. But globalizing comes with an Achilles’ heel: The vaster a company’s operations, the more vulnerable it becomes to jarring events around the world, including natural disasters, political upheaval, industrial actions, mistreatment of workers in suppliers’ factories, and damaging effects of climate change.

“For a variety of reasons, these disruptions are getting more potent,” says Yossi Sheffi, the Elisha Gray II Professor of Engineering Systems at MIT, and director of MIT’s Center for Transportation and Logistics.

So if companies seek greater rewards by spreading themselves out, they should also recognize that they face greater risks. Now in a new book, “The Power of Resilience: How the Best Companies Manage the Unexpected,” just published by the MIT Press, Sheffi details how some leading multinationals are coping with a rising tide of disturbances, and suggests ways in which all large firms can think anew about their disruption-prone operations.

As one strategy, many companies have adopted the idea that crisis response is a corporate capacity unto itself, and have built up emergency-preparedness groups staffed with specialists in engineering or supply-chain analysis who can quickly devise new plans. To prepare for particular disruptions that can be imagined, many firms have even drawn up “playbooks” for multiple potential scenarios in which events force them to change their operations.

“In order to prepare for ‘black swans,’ companies have to have general resilience processes,” Sheffi says.

To see the many business problems stemming from uncontrollable events, consider the earthquake and tsunami that devastated Japan in 2011. This was, as Sheffi observes in the book, foremost a human tragedy, with 19,000 dead and 400,000 injured.

Inevitably, though, it also affected the business operations of companies such as Intel, the world’s largest chipmaker. In one of the book’s case studies, Sheffi surveys Intel’s response strategy. This involved a two-pronged response. First, an Intel team dealt with the well-being of Intel personnel and their suppliers in the affected area.

Second, Intel pursued “business continuity” measures, assessing the status of 365 materials used in its products, which depend on the production of many types of specialized chemicals. About 75 percent of the materials in Intel chips were potentially at risk, due to the high concentration of chemical firms in Japan. So the company sought to acquire more supplies where needed, search its own supply chain for more materials, conserve what it already had, and look for replacement materials where possible.

None of this is easy in today’s globalized, outsourced industrial world. “The supply chains are deeper,” Sheffi says, with layers of suppliers providing products to each other, so for the multinational firm selling the finished product and trying to locate resources, “It’s hard to know who they are.” Even in the case of high-functioning Intel, it took about 10 days after the Japanese disaster to identify real problems at 60 suppliers, covering four tiers of its own supply chain.

To conduct this kind of effective industrial crisis response, Sheffi adds, firms need “people who know both the suppliers’ universe as well as the material requirements and possible alternative suppliers. These supply chain professionals typically work with engineers who can qualify new suppliers and new alternative materials quickly so as not to disrupt production and the customers relying on the products.” And firms need managers ready to act, because “once you find a new supply, you need contracts.”

On the other hand, he suggests, while response teams “have to always inform top management,” a firm management procedure is important, because top executives may “otherwise get involved where they shouldn’t get involved” — on specific supply-chain or engineering issues, for instance.

“When there’s a crisis, everybody tries to help,” Sheffi observes. Some firms account for any contingency that can be imagined with detailed, prearranged crisis plans. The networking equipment giant Cisco, for instance, has about 15 different “playbooks” it could turn to in the event of different types of crises.

That type of planning, Sheffi believes, is necessary because of the wider range of problems that can now afflict companies. “The Power of Resilience” includes a matrix of possible disruptions and estimations of their likelihood — along with his view that the least likely events may be the most important to think about.

“The highest probability [events] are where [some] people put all their preparation,” Sheffi says. “My argument is, this is only half the problem.” Along with some other business thinkers, Sheffi contends that so-called “black swan” events —occurrences viewed as nearly impossible — are more likely than is commonly estimated.

That may include issues with cybersecurity, where Sheffi sees problems beyond breaches of consumers’ financial data.

“Cybersecurity is becoming a much bigger issue,” he says. “Many physical systems are operated through the Internet. Dams and bridges and traffic lights are operated digitally, as is the electrical grid. People think a cyberattack is just stealing data. It’s not. It can have devastating physical results.”

And then there are long-term problems that are foreseeable, but require continual planning measures not always used by corporate executives and boards. Consider climate change: Among many other things, a changing climate may lead to rising seas that affect commercial ports; to agricultural shocks, and thus price changes; and to intensified political conflict, affecting business operations.

With these issues in mind, Sheffi writes in the book, some MIT research suggests that companies that implement long-term measures “may actually be more valuable in the long term with a broader view than if the [short-term] financial bottom line is their only concern.”

“The Power of Resilience” may find a wide business audience. Hau L. Lee, a professor of operations, information, and technology at Stanford University, calls it “a brilliant book that should be read by all business leaders in order to capably manage risks and create growth in the new global economy.”

And all those potential hazards in business operations, Sheffi concludes, are, if nothing else, forcing companies to raise their resilience levels — which may ultimately help firms by making them more flexible and ready to respond to demand changes and competitors’ offerings, even without a major disruption. Business “can become better” at times of crisis, Sheffi says, “by also using the opportunity to fix long-term issues that cannot be dealt with without a crisis.”

Prof. Yossi Sheffi writes for The Wall Street Journal that businesses need to safeguard their supply chains against “black swan” events, rare situations that wreak havoc. Sheffi explains that the “changing nature of supply chains has made it more important to consider the potential impact of the black-swan event.”