A Ticketmaster for science seminars 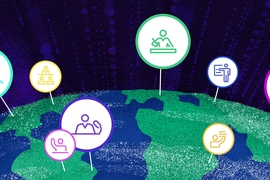 ↓ Download Image
Caption: Researchseminars.org serves as a sort of crowdsourced Ticketmaster for science talks. Instead of featuring upcoming shows and concerts, the new site lists more than 1,000 free, upcoming seminars hosted online by more than 115 institutions around the world.
Credits: Image: MIT News

Caption:
Researchseminars.org serves as a sort of crowdsourced Ticketmaster for science talks. Instead of featuring upcoming shows and concerts, the new site lists more than 1,000 free, upcoming seminars hosted online by more than 115 institutions around the world.
Credits:
Image: MIT News

One of the perks of an academic’s pre-pandemic life was the chance, at least once a week, to take a break from problem sets and proofs, and walk down the hall or across campus to sit in on cutting-edge research presented by invited experts from around the world.

Offered through a department’s regular seminar series, these talks were also opportunities to get some friendly face-to-face with colleagues who were otherwise buried in their own work. And on occasion, a chance meeting or a raised question could spark a new collaboration or an unexpected offshoot that pushed a field forward.

The Covid-19 pandemic has put a pause on seminars hosted physically on university campuses. But in mid-March, a small team of MIT mathematicians began to notice that institutions around the world were finding ways to continue hosting seminars, online. To virtually attend these talks, however, required hearing about them through word of mouth or digging through the webpages of individual departments or organizers.

Enter researchseminars.org, a website the MIT team formally launched this week, that serves as a sort of crowdsourced Ticketmaster for science talks. Instead of featuring upcoming shows and concerts, the new site lists more than 1,000 free, upcoming seminars hosted online by more than 115 institutions around the world.

“We’ve had a lot of feedback from users who say, ‘thank you so much for building this, I feel like part of a community again,’” says Drew Sutherland, principal research scientist in MIT’s Department of Mathematics.

The site is designed so that any verified organizer can add their own seminar listing. In this way, the team hopes the site can serve as a centralized, crowdsourced portal to the latest scientific advances being presented anywhere in the world. Users can filter seminars by topic, then click on a listing for details on how to virtually attend. After entering a password — or in more discerning cases, solving a math puzzle — they can sit in on live talks they might have been unable to attend in person.

In just a few weeks, the site has drawn about half a million pageviews, from visitors in 160 countries.

If reactions on Twitter are any indication, the site has been a bright source of connection for academics who’ve been isolated from their campuses, and from each other, for weeks and months since the pandemic’s start.

For instance, Jordan Ellenberg, a math professor at the University of Wisconsin at Madison, tweeted that the new site “is like the departure board at O’Hare if you could just get on any flight you wanted and they were all free.”

Another, from Britanny Kamai, an astrophysicist at Caltech, exclaimed, “This is the future of science that I want to live in! One with more access and entry points.”

And Anh-Khoi Trinh, a theoretical physicist at McGill University, put it all in context with this simple tweet: “This is how you science during a quarantine.”

“My hope is, obviously one day the pandemic will end and we’ll all start going back to seminars that are taking place in physical rooms,” Sutherland says. “But there will still be a large number of online events going on, and our site is intended to make it easy for people to find both.”

Back in mid-March, shortly after MIT cleared out much of its campus in an effort to slow the spread of Covid-19, Sutherland caught up online with Edgar Costa and David Roe, both research scientists in MIT’s math department, and Bjorn Poonen, distinguished professor in science, during their biweekly lab meeting for the Simons Collaboration in Arithmetic Geometry, Number Theory, and Computation.

The group specializes in number theory, a branch of mathematics that deals with the study of integers and their associated functions. As it happens, there are more than a handful of number theory groups around Boston, each normally hosting their own seminars, and opportunities for researchers to meet up.

Keeping track of these talks, and figuring out which they could actually make time to attend, quickly became an unwieldy task. The previous fall, Costa had built a website to aggregate all the number theory seminars in and around Boston. Then, in the early days of the pandemic, as organizers shifted their seminars online, Roe wondered whether they might expand the site beyond Boston, and to topics beyond number theory. They approached Poonen and Sutherland with their idea.

“We realized, wait, we can go to a number theory seminar anywhere in the country,” Sutherland says. “Then it was, ‘Why just number theory? Why not all of math?’”

Costa and Roe spent the next few weeks building an interactive, online directory of math seminars, designed to handle and organize a huge amount of data, with an interface that users can easily use to enter their own seminar listings. They were able to get the site up and running quickly by building on a code they developed for another number theory-based website — the LMFDB, or L-functions and Modular Forms Database, a massive online atlas of mathematical objects that is organized to reveal relationship between objects that scientists can further explore.

“That project brought us a different mindset towards the way to present and organize large amounts of data, which we were able to use to quickly get this new site off the ground,” Roe says.

In early April, the researchers launched a beta version that initially included talks only related to math. They populated the site first with lists of seminars that other mathematicians had curated, as well as whatever seminars the researchers themselves knew about. They then emailed math listservs to invite users to register and try out the site, both by checking out existing seminars, and adding their own.

“The first day we launched, we were using Gmail’s email server to send out confirmation links for users who were registering, and we quickly hit the limit of 500 emails that Google would allow us to send in a day, and had to scramble to move our email server in-house,” Roe says. “We had almost 10,000 visitors within the first 24 hours the site was live, and the response has vastly exceeded our expectations.”

Very quickly, word of the new website spread throughout the math community, who eagerly added to the exponentially growing list of talks. Organizers such as Poonen, who runs MIT’s number theory seminar, also saw an uptick in the number of people attending virtual seminars listed on the site.

“We would have maybe 20 people at a typical meeting, but now it’s usually more like 80 to 100, and this is a pretty technical subject,” Poonen says. “It’s not for everybody, but there are people all around the world who want to participate. I’ve also run into people whom I haven’t seen in years, who just happen to come to the same talk.”

“On the one hand, mathematicians tend to work alone, but we’re also very social — we all go to tea together, and the research seminar was built into our weekly schedule, where we got to meet and see all the people that we know,” Sutherland adds. “There is really a social aspect to it, and after months of isolation, this kind of connection makes a big difference.”

In response to increasing interest from scientists in other subject fields, the team has since added more topics to the website, including seminars in physics, biology, and computer science. They’re also working out ways to host social platforms on the site, such as chat rooms that run in parallel with scheduled talks.

“Most of my math happens when I meet with someone and spend a coffee break working with them,” Costa says. “I miss the connection of looking over the same piece of paper and taking the pen from each other to fix a problem. Online provides that to some level but differently. And we have some ideas of how to recreate those more informal interactions going forward.”

This research was funded, in part, by the Simons Foundation.

The answer to life, the universe, and everything