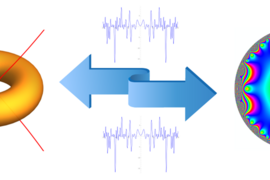 ↓ Download Image
Caption: Illustrations representing (left to right) an elliptic curve, L-function, and modular form, some of the types of mathematical objects whose relationships are explored in a vast new database.
Credits: Andrew Sutherland

Caption:
Illustrations represent (left to right) an elliptic curve, L-function, and modular form, some of the types of mathematical objects whose relationships are explored in a vast new database.
Credits:
Image: Andrew Sutherland

An international group of mathematicians at MIT and other institutions has released a new online resource that provides detailed maps of previously uncharted mathematical terrain.

The "L-functions and Modular Forms Database," or LMFDB, is a detailed atlas of mathematical objects that maps out the connections between them. The LMFDB exposes deep relationships and provides a guide to previously uncharted territory that underlies current research in several branches of physics, computer science, and mathematics. This coordinated effort is part of a massive collaboration of researchers around the globe.

The scale the computational effort that went into creating the LMFDB is staggering: Multiple teams of researchers spent a total of nearly 1,000 years of computer time on calculations. One recent computation by Principal Research Scientist Andrew Sutherland at MIT used more than 72,000 cores of Google's Compute Engine to complete in one weekend a tabulation that would have taken more than a century on a single computer. As noted by Sutherland, "Computations in number theory are often amenable to massive parallelization, and this allows us to scale them to the cloud." Some of these calculations are so intricate that only a handful of experts know how to do them, and some are so big that it makes sense to run them only once, and then share the verified results.

Large-scale cloud computing is just one of the ways in which the project is changing the way mathematics research is done. The LMFDB provides a sophisticated Web interface that allows both experts and amateurs to easily navigate its contents. Each object has a “homepage” and links to related objects, or “friends.” The LMFDB also includes an integrated knowledge database that explains its contents and the mathematics behind it. "We are mapping the mathematics of the 21st century," says project member Brian Conrey, director of the American Institute of Mathematics. "The LMFDB is both an educational resource and a research tool, one that will become indispensable for future exploration."

Prime numbers have fascinated mathematicians throughout the ages. The distribution of primes is believed to be random, but proving this remains beyond the grasp of mathematicians to date. Under the Riemann hypothesis, the distribution of primes is intimately related to the Riemann zeta function, which is the simplest example of an L-function. The LMFDB contains more than 20 million L-functions, each of which has an analogous Riemann hypothesis that is believed to govern the distribution of a wide range of more exotic mathematical objects. Patterns found in the study of these L-functions also arise in complex quantum systems, and there is a conjectured connection to quantum physics.

One of the great triumphs in mathematics of the late 20th century was Andrew Wiles’ proof of Fermat's Last Theorem, a proposition by Pierre de Fermat that went unproven for more than 300 years despite the efforts of generations of mathematicians. The key to Wiles' proof was establishing a long-conjectured relationship between two mathematical worlds: elliptic curves and modular forms. Elliptic curves arise naturally in many parts of mathematics and can be described by a simple cubic equation; they form the basis of cryptographic protocols used by most of the major Internet companies, including Google, Facebook, and Amazon. Modular forms are more mysterious objects: complex functions with an almost unbelievable degree of symmetry. Elliptic curves and modular forms are connected via their L-functions. The remarkable relationship between elliptic curves and modular forms is made fully explicit in the LMFDB, where users can travel from one world to another with the click of a mouse and view the L-functions that connect the two worlds.

The connections exploited by Wiles are just a small part of the Langlands program, a vast web of conjectures proposed by Robert Langlands in the late 1960s that has been called the Rosetta Stone of mathematics. The Langlands program is enormous in scope but vague in some of its details; it serves as a framework for the millions of connections now cataloged by the LMFDB. The exact nature of these connections is the subject of a great deal of current research that will be accelerated by the LMFDB.

Several simultaneous events on May 10 in North America and Europe will celebrate the launch of the LMFDB, including public presentations and lectures at Dartmouth College in Hanover, New Hampshire; the American Institute for Mathematics in San Jose, California; and the University of Bristol in the United Kingdom.

At Putnam, students rise to the challenge