At Putnam, students rise to the challenge 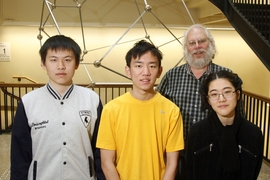 For the third consecutive year, MIT placed first in the William Lowell Putnam Mathematical Competition and dominated the upper rankings. Among 4,275 participants from 554 colleges and universities in the 2015 contest, 57 of the top 199 scorers — nearly 30 percent — were MIT students.

The Putnam, a prestigious annual contest for undergraduate students in the U.S. and Canada, is highly challenging even for the math-inclined pupils that choose to participate. The highest score this year was 99 of 120 possible points, and the median score was 1, according to the recently released results. (At least half the students received a score of 1 or 0.)

“We are tremendously proud of MIT’s undergraduates who have dominated the William Lowell Putnam Mathematical Competition over the past dozen years,” says Michael Sipser, dean of the School of Science. “It is a privilege and a pleasure to have such talented students. Congratulations all!”

The winning team was made up of MIT juniors Mark Sellke, Bobby Shen, and David Yang. Two MIT students — Yang and freshman Yunkun Zhou — were among the six competitors with the highest individual scores and were named Putnam Fellows for their achievement. Freshman Danielle Wang received the Elizabeth Lowell Putnam Prize, awarded each year to the highest-scoring female student.

“The depth of MIT’s dominance is unprecedented,” says Tomasz Mrowka, the Singer Professor of Mathematics and head of the Department of Mathematics at MIT. “Each year since 2004, we’ve had at least 20 students receive an honorable mention. And every year since 2002 — with the exception of 2011 — at least two MIT students have been Putnam Fellows. Congratulations to our students, absolutely amazing job.”

Zhou, who took the exam for the first time this year, competed in the Harvard-MIT Mathematics tournament and the International Mathematics Olympiad as a high school student. “I think the competition is hard, and I was really fortunate to be among the Putnam Fellows,” he says.  “Some people said this year’s test seemed to be harder than the one last year.”

Peter Shor, the Morss Professor of Applied Mathematics, was the faculty coordinator for MIT’s 2015 Putnam team and taught course 18.A34 (Problem Solving Seminar) to help freshmen prepare for the exam. Shor was himself a Putnam Fellow as an undergraduate student at Caltech.

“Most problems, you don’t need to know more than calculus to solve, but you need to be clever,” says Shor. “There are some standard tricks you can learn that are used in Putnam problems regularly, but there are also problems where you haven’t seen anything like it before. Those are probably the best ones, but also the most difficult.”

The exam consists of 12 problems, worth 10 points each, that students tackle across two three-hour sessions. The first problem of the exam is relatively straightforward; the last problems of each session — A6 and B6 — are the trickiest. This year, not one student received full points on B6.

“The hardest problems, which are the last problems of each session, seem to require some trick or some very sophisticated way of looking at something,” says Bobby Shen, a junior who was a member of the winning team and one of the top 16 individuals. “Sometimes the solutions are short, but the way to find them is difficult.”

Doing well on the Putnam is an impressive feat — but the test score is not a measure of all mathematical strengths, Shor emphasizes.

More than a prize