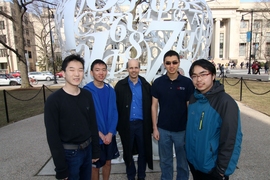 MIT swept the board at this year’s prestigious William Lowell Putnam Mathematical Competition, winning the team award and placing five students among the top six individual spots, an achievement that earns each the title of “Putnam Fellow.”

The Putnam competition, the premier undergraduate mathematics contest in the U.S. and Canada, is notoriously tough: The median score for the latest exam, held last Dec. 6, was just three points out of a possible 120; more than half of the participants did not solve a single problem fully.

This makes the overall performance of MIT’s students all the more remarkable, according to Michael Sipser, the Barton L. Weller Professor of Mathematics and dean of the School of Science.

“This year’s fantastic and unprecedented performance by MIT’s undergraduate math stars continues our increasingly amazing results over the past decade on the William Lowell Putnam Mathematical Competition,” Sipser says. “Congratulations to the team and to our other high scorers and to all contestants. MIT math rocks!”

This year 4,320 students from 557 colleges and universities across the U.S. and Canada took part in the competition, including 431 teams. Of these, 32 out of the 89 top individual scorers were MIT students, including the five Putnam Fellows: senior Zipei Nie, freshman Mark Sellke, sophomore Bobby Shen, sophomore David H. Yang, and sophomore Lingfu Zhang.

Nie and Yang were also members of the winning MIT team, alongside junior Mitchell M. Lee. MIT will receive a $25,000 award, while each team member will receive $1,000. Teams from Harvard University and Rensselaer Polytechnic Institute followed MIT, finishing in second and third place, respectively.

The results of this year’s competition are a tangible sign of the exceptional ways in which students succeed in their endeavors, according to Tomasz Mrowka, the Singer Professor of Mathematics and head of the Department of Mathematics at MIT. “The heart of MIT is the exceptional people that go about their endeavors with passion and creativity mixed with a heavy dose of intelligence,” Mrowka says. “The mathematics department is very proud of our students.”

The Putnam competition, which was established in 1938 and is held every year on the first Saturday in December — with results announced approximately four months later — consists of 12 problems, each worth 10 points, and lasts for six hours over two equal sessions.

The competition is designed to reward quick thinkers, says Bjorn Poonen, the Claude E. Shannon Professor of Mathematics at MIT and one of just eight contestants ever to be a four-time Putnam Fellow — in Poonen’s case, as a Harvard undergraduate from 1985 to 1988.

This year, Poonen was MIT’s faculty coordinator for the competition, and also taught course 18.A34 (Problem Solving Seminar) to help freshmen prepare for the exam.

“The competition is more like the 400-meter dash than a marathon, since in mathematics research most discoveries are made only after a much longer effort,” Poonen says. “The hardest problem this year was solved by none of the 4,320 participants.”

Although not all mathematicians perform well in such timed competitions, many past winners have gone on to have distinguished careers in mathematics and other fields, with a few even winning a Fields Medal or Nobel Prize, Poonen says.

The competition is open to all undergraduates, whether or not they are math majors, he says. “But most of the top scorers are students who have had prior experience with math competitions in high school, or who have practiced by working through Putnam problems from previous years.”

Sellke, a math major at MIT and one of this year’s Putnam Fellows, scored 96 out of the possible 120 points in the exam. He says his experience in high-school math competitions undoubtedly helped him to do well in the exam. “In fact, all six of this year’s Fellows have previously earned gold medals at the International Mathematical Olympiad for high-school students,” he says.

Shen, another Putnam Fellow, attributes his success in the competition to writing clear solutions to the easiest eight of the 12 problems. “A common sentiment about the Putnam is that graders are pretty strict on the easy problems, and that losing points is as inevitable as snow in Boston in February,” Shen says. “So while others rush through the exam, I'll just keep defining my variables, lemmas, and edge cases as carefully as I can, and hopefully keep cashing in.”

Each of the six Putnam Fellows will receive an award of $2,500. The next 10 highest individual scorers in the competition, five of whom were MIT students, will receive a prize of $1,000.

“Our department classes focus teaching on the deeply rich subjects of mathematics, as well as methods for applying these ideas to solve mathematical, scientific, or engineering problems,” says Sipser, a former head of MIT’s Department of Mathematics.

“Our success at the Putnam competition is mostly due to the incredible students that choose to come to MIT,” he adds. “We do train them for the competition, and I am sure that helps, but more important is the talent and drive of the students.”

Falling in love with numbers at MIT

More than a prize