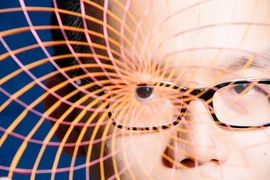 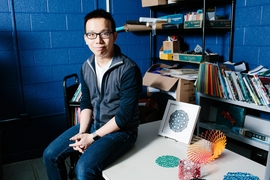 ↓ Download Image
Caption: “I enjoy coding, programming, making pretty things,” YQ Lu says. “But then I also enjoy making things that I can hold with my hand and examine.” 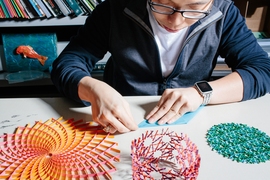 ↓ Download Image
Caption: “I love all the math that I'm doing,” Lu explains. “But I also want to do something a lot more constructive, and be able to build things and apply my technical knowledge in a hands-on manner.”

Caption:
“I enjoy coding, programming, making pretty things,” YQ Lu says. “But then I also enjoy making things that I can hold with my hand and examine.”
Credits:
Photo: M. Scott Brauer

Caption:
“I love all the math that I'm doing,” Lu explains. “But I also want to do something a lot more constructive, and be able to build things and apply my technical knowledge in a hands-on manner.”
Credits:
Photo: M. Scott Brauer

Yongquan “YQ” Lu is perfectly at home surrounded by sheets of paper. For him, these rectangles represent endless possibilities for math-based art, ranging from exquisite, three-dimensional origami forms created without a single cut, to intricate, multicolored geometric designs assembled with laser-cut paper strips.

Lu, a double major in mathematics and electrical engineering and in computer science, is an independent thinker who enjoys following his own path. During his time at MIT, this has meant combining his two loves, math and paper art, in increasingly interesting ways, while staying committed to community outreach.

Lu, who grew up in Singapore, was interested in math and paper art from an early age. During high school, he took six weeks during the school year to attend Canada/USA Mathcamp, where he was surrounded by students, counselors, and teachers who shared his excitement for math.

The experience motivated Lu to apply to MIT, but before college he was required to serve for two years in the Singapore military. Lu, who ended up working in an administrative office, approached his service with a positive mindset and a determination to learn as much as he could.

“Some of my friends hate doing national service because it feels like you have this bright future in front of you, but then everything is on hold,” he says. “But it was a really good experience for me. I think of that as almost a two-year-long internship.”

Lu came to MIT expecting to study theoretical math, but after two years of coursework in math, he found himself increasingly drawn to computer science and eventually decided to add on a second major.

“I love all the math that I'm doing,” he explains. “But I also want to do something a lot more constructive, and be able to build things and apply my technical knowledge in a hands-on manner.”

Lu has been interested in origami since middle school, but during his military service he started creating paper sliceform art, which involves cutting out thin strips of brightly colored paper with perpendicular slits in them, and interlocking the strips to assemble complex geometric patterns.

Lu’s early attempts were done entirely by hand, but as he acquired more computer science knowledge, he realized that he might be able to write a program to automate the process. Lu teamed up with Erik Demaine, who is a professor studying algorithms at MIT’s Computer Science and Artificial Intelligence Laboratory (CSAIL) and an accomplished paper artist himself.

With Demaine’s guidance, Lu developed a Web program that allows sliceform artists to choose from a number of geometric designs and adjust their design based on different parameters. The paper strips are then laser cut and assembled by the artist. Lu created an open-source website that makes his program available to the public, and he has gotten feedback that some people are even using it as a template for other types of art. Lu also presented a paper on his work at Bridges, an annual conference that focuses on math, art, and culture, an experience that he really enjoyed.

“I went there and I immediately thought, oh I found my people,” he explains. “There were college professors but also a full-time math artist and people who were doing other kinds of paper art.”

Lu is currently the president of OrigaMIT, MIT’s origami group. The organization has 10 undergraduate officers, and while they enjoy creating complex origami pieces, their bigger mission is origami-based community outreach. They hold weekly folding workshops that are open to the public and organize programs for MIT students during finals period. Their biggest outreach event every year is an annual convention, a full day of origami lectures and workshops that draws people from all over the country. More than 200 people attended the last convention.

“It's the one thing I look forward to the most every year,” Lu says. “We wake up at six in the morning to set up everything, and then we have all these people from all over descending on MIT and folding.”

For the past three years, Lu has also been heavily involved in Amphibious Achievement, an athletic and academic mentorship program for high school students in the Boston area. Every Sunday in the fall and spring, the students, or Achievers, come to MIT and receive instruction in different sports and academic areas. Lu, who was the co-director of academics his sophomore and junior years, ran the classroom part of the program, where he tried to find innovative ways to teach the kids math that didn’t require drilling them on sums or having them memorize formulas.

“We did a lot of things by discovery that weren't necessarily high school math, but were logic puzzles and puzzles with games,” says Lu. “A lot of the Achievers were initially dubious about this and were very used to being handed an answer and a formula to apply, so it was very gratifying to see them actually enjoy the process and think and struggle through a puzzle which they had never done before.”

Lu, who graduates this May, has accepted a job at MarkForged, a 3-D printing company that was founded by an MIT graduate and has developed techniques for 3-D printing with strong, lightweight materials such as Kevlar, carbon fiber, and fiberglass. Lu likes the interdisciplinary nature of the company, where he will be designing software and working closely with the hardware specialists that are using his programs. For him, the company is a happy medium between computer science and hands-on design

“I enjoy coding, programming, making pretty things,” he says, “But then I also enjoy making things that I can hold with my hand and examine.”

Lu, who to his knowledge is currently one of only a handful of paper sliceform artists, also plans to continue creating and exhibiting his artwork in his spare time. He doesn’t envision selling his work, but someday he would like to sell kits of instructions and precut paper strips so that people can assemble their own paper sliceform creations.

But for right now, Lu is intent on staying in the moment and taking things one step at a time.

“If you asked me four years ago, I wouldn't have been able to predict where I am now,” he says. “So instead of looking forward, my main priority is to be around some really smart people and learn from them.”

Amphibious Achievement teaches valuable lessons in and out of the water