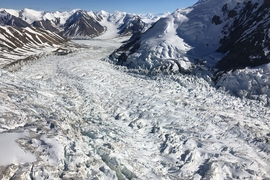 About 10 percent of the Earth’s land mass is covered in glaciers, most of which slip slowly across the land over years, carving fjords and trailing rivers in their wake. But about 1 percent of glaciers can suddenly surge, spilling over the land at 10 to 100 times their normal speed.

When this happens, a glacial surge can set off avalanches, flood rivers and lakes, and overwhelm downstream settlements. What triggers the surges themselves has been a longstanding question in the field of glaciology.

Now scientists at MIT and Dartmouth College have developed a model that pins down the conditions that would trigger a glacier to surge. Through their model, the researchers find that glacial surge is driven by the conditions of the underlying sediment, and specifically by the tiny grains of sediment that lie beneath a towering glacier.

“There’s a huge separation of scales: Glaciers are these massive things, and it turns out that their flow, this incredible amount of momentum, is somehow driven by grains of millimeter-scale sediment,” says Brent Minchew, the Cecil and Ida Green Assistant Professor in MIT’s Department of Earth, Atmospheric and Planetary Sciences. “That’s a hard thing to get your head around. And it’s exciting to open up this whole new line of inquiry that nobody had really considered before.”

The new model of glacial surge may also help scientists better understand the behavior of larger masses of moving ice.

“We think of glacial surges as natural laboratories,” Minchew says. “Because they’re this extreme, transient event, glacial surges give us this window into how other systems work, such as the fast-flowing streams in Antarctica, which are the things that matter for sea-level rise.”

Minchew and his co-author Colin Meyer of Dartmouth have published their results this month in the journal Proceedings of the Royal Society A.

While he was still a PhD student, Minchew was reading through “The Physics of Glaciers,” the standard textbook in the field of glaciology, when he came across a rather bleak passage on the prospect of modeling a glacial surge. The passage outlined the basic requirements of such a model and closed with a pessimistic outlook, noting that “such a model has not been established, and none is in view.”

Rather than be discouraged, Minchew took this statement as a challenge, and as part of his thesis began to lay out the framework for a model to describe the triggering events for a glacial surge.

As he quickly realized, the handful of models that existed at the time were based on the assumption that most surge-type glaciers lay atop bedrock — rough and impermeable surfaces that the models assumed remained unchanged as glaciers flowed across. But scientists have since observed that glacial surges often occur not over solid rock, but instead across shifting sediment.

Minchew’s model simulates a glacier’s movement over a permeable layer of sediment, made up of individual grains, the size of which he can adjust in the model to study both the interactions of the grains within the sediment, and ultimately, the glacier’s movement in response.

The new model shows that as a glacier moves at a normal rate across a sediment bed, the grains at the top of the sediment layer, in direct contact with the glacier, are dragged along with the glacier at the same speed, while the grains toward the middle move slower, and those at the bottom stay put.

This layered shifting of grains creates a shearing effect within the sediment layer. At the microscale, the model shows that this shearing occurs in the form of individual sediment grains that roll up and over each other. As grains roll up, over, and away with the glacier, they open up spaces within the water-saturated sediment layer that expand, providing pockets for the water to seep into. This creates a decrease in water pressure, which acts to strengthen the sedimentary material as a whole, creating a sort of resistance against the sediment’s grains and making it harder for them to roll along with the moving glacier.

However, as a glacier accumulates snowfall, it thickens and its surface steepens, which increases the shear forces acting on the sediment. As the sediment weakens, the glacier starts flowing faster and faster.

As a test of their model, the researchers compared predictions of their model to observations of two glaciers that recently experienced surges, and found that the model was able to reproduce the flow rates of both glaciers with reasonable precision.

In order to predict which glaciers will surge and when, the researchers say scientists will have to know something about the strength of the underlying sediment, and in particular, the size distribution of the sediment’s grains. If these measurements can be made of a particular glacier’s environment, the new model can be used to predict when and by how much that glacier will surge.

Beyond glacial surges, Minchew hopes the new model will help to illuminate the mechanics of ice flow in other systems, such as the ice sheets in West Antarctica.

This research was funded, in part, by the U.S. National Science Foundation and NASA.

For the love of ice: Journeys to the remote and inhospitable