Study: Reflecting sunlight to cool the planet will cause other global changes 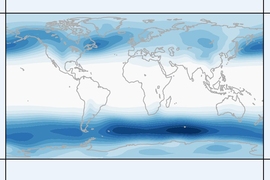 How can the world combat the continued rise in global temperatures? How about shading the Earth from a portion of the sun’s heat by injecting the stratosphere with reflective aerosols? After all, volcanoes do essentially the same thing, albeit in short, dramatic bursts: When a Vesuvius erupts, it blasts fine ash into the atmosphere, where the particles can linger as a kind of cloud cover, reflecting solar radiation back into space and temporarily cooling the planet.

Some researchers are exploring proposals to engineer similar effects, for example by launching reflective aerosols into the stratosphere — via planes, balloons, and even blimps — in order to block the sun’s heat and counteract global warming. But such solar geoengineering schemes, as they are known, could have other long-lasting effects on the climate.

The team considered an idealized scenario in which solar radiation was reflected enough to offset the warming that would occur if carbon dioxide were to quadruple in concentration. In a number of global climate models under this scenario, the strength of storm tracks in both the northern and southern hemispheres weakened significantly in response.

Weakened storm tracks would mean less powerful winter storms, but the team cautions that weaker storm tracks also lead to stagnant conditions, particularly in summer, and less wind to clear away air pollution. Changes in winds could also affect the circulation of ocean waters and, in turn, the stability of ice sheets.

“About half the world’s population lives in the extratropical regions where storm tracks dominate weather,” says Charles Gertler, a graduate student in MIT’s Department of Earth, Atmospheric and Planetary Sciences (EAPS). “Our results show that solar geoengineering will not simply reverse climate change. Instead, it has the potential itself to induce novel changes in climate.”

Gertler and his colleagues have published their results this week in the journal Geophysical Research Letters. Co-authors include EAPS Professor Paul O’Gorman, along with Ben Kravitz of Indiana University, John Moore of Beijing Normal University, Steven Phipps of the University of Tasmania, and Shingo Watanabe of the Japan Agency for Marine-Earth Science and Technology

Scientists have previously modeled what Earth’s climate might look like if solar geoengineering scenarios were to play out on a global scale, with mixed results. On the one hand, spraying aerosols into the stratosphere would reduce incoming solar heat and, to a degree, counteract the warming caused by carbon dioxide emissions. On the other hand, such cooling of the planet would not prevent other greenhouse gas-induced effects such as regional reductions in rainfall and ocean acidification.

There have also been signs that intentionally reducing solar radiation would shrink the temperature difference between the Earth’s equator and poles or, in climate parlance, weaken the planet’s meridional temperature gradient, cooling the equator while the poles continue to warm. This last consequence was especially intriguing to Gertler and O’Gorman.

“Storm tracks feed off of meridional temperature gradients, and storm tracks are interesting because they help us to understand weather extremes,” Gertler says. “So we were interested in how geoengineering affects storm tracks.”

The team looked at how extratropical storm tracks might change under a scenario of solar geoengineering known to climate scientists as experiment G1 of the Geoengineering Model Intercomparison Project (GeoMIP), a project that provides various geoengineering scenarios for scientists to run on climate models to assess their various climate effects.

The G1 experiment assumes an idealized scenario in which a solar geoengineering scheme blocks enough solar radiation to counterbalance the warming that would occur if carbon dioxide concentrations were to quadruple.

The researchers used results from various climate models run forward in time under the conditions of the G1 experiment. They also used results from a more sophisticated geoengineering scenario with doubling of carbon dioxide concentrations and aerosols injected into the stratosphere at more than one latitude. In each model they recorded the day-to-day change in air pressure at sea level pressure at various locations along the storm tracks. These changes reflect the passage of storms and measure a storm track’s energy.

“If we look at the variance in sea level pressure, we have a sense of how often and how strongly cyclones pass over each area,” Gertler explains. “We then average the variance across the whole extratropical region, to get an average value of storm track strength for the northern and southern hemispheres.”

Their results, across climate models, showed that solar geoengineering would weaken storm tracks in both Northern and Southern hemispheres. Depending on the scenario they considered, the storm track in the Northern Hemisphere would be 5 to 17 percent weaker than it is today.

“A weakened storm track, in both hemispheres, would mean weaker winter storms but also lead to more stagnant weather, which could affect heat waves,” Gertler says. “Across all seasons, this could affect ventilation of air pollution. It also may contribute to a weakening of the hydrological cycle, with regional reductions in rainfall. These are not good changes, compared to a baseline climate that we are used to.”

The researchers were curious to see how the same storm tracks would respond to just global warming alone, without the addition of social geoengineering, so they ran the climate models again under several warming-only scenarios. Surprisingly, they found that, in the northern hemisphere, global warming would also weaken storm tracks, by the same magnitude as with the addition of solar geoengineering. This suggests solar geoengineering, and efforts to cool the Earth by reducing incoming heat, would not do much to alter global warming’s effects, at least on storm tracks — a puzzling outcome that the researchers are unsure how to explain.

In the Southern Hemisphere, there is a slightly different story. They found that global warming alone would strengthen storm tracks there, whereas the addition of solar geoengineering would prevent this strengthening, and even further, would weaken the storm tracks there.

The team also observed that the weakening of storm tracks was strongly correlated with changes in temperature and humidity. Specifically, the climate models showed that in response to reduced incoming solar radiation, the equator cooled significantly as the poles continued to warm. This reduced temperature gradient appears to be sufficient to explain the weakening storm tracks — a result that the group is the first to demonstrate.

“This work highlights that solar geoengineering is not reversing climate change, but is substituting one unprecedented climate state for another,” Gertler says. “Reflecting sunlight isn’t a perfect counterbalance to the greenhouse effect.”

Adds O’Gorman: “There are multiple reasons to avoid doing this, and instead to favor reducing emissions of CO2 and other greenhouse gases.”

This research was funded, in part, by the National Science Foundation, NASA, and the Industry and Foundation sponsors of the MIT Joint Program on the Science and Policy of Global Change.

Popular Mechanics reporter Caroline Delbert writes that a study by MIT researchers finds that solar geoengineering efforts aimed at cooling the planet would change extratropical storm tracks. “The scientists discovered an amount of aerosol coverage required to offset that much more carbon dioxide would alter the storm tracks in both hemispheres and around the world,” says Delbert.