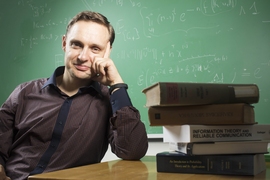 In the secluded Russian city where Yury Polyanskiy grew up, all information about computer science came from the outside world. Visitors from distant Moscow would occasionally bring back the latest computer science magazines and software CDs to Polyanskiy’s high school for everyone to share.

One day while reading a borrowed PC World magazine in the mid-1990s, Polyanskiy learned about a futuristic concept: the World Wide Web.

Believing his city would never see such wonders of the internet, he and his friends built their own. Connecting an ethernet cable between two computers in separate high-rises, they could communicate back and forth. Soon, a handful of other kids asked to be connected to the makeshift network.

“It was a pretty challenging engineering problem,” recalls Polyanskiy, an associate professor of electrical engineering and computer science at MIT, who recently earned tenure. “I don’t remember exactly how we did it, but it took us a whole day. You got a sense of just how contagious the internet could be.”

Thanks to the then-recent fall of the Iron Curtain, Polyanskiy’s family did eventually connect to the internet. Soon after, he became interested in computer science and then information theory, the mathematical study of storing and transmitting data. Now at MIT, his most exciting work centers on preventing major data-transmission issues with the rise of the “internet of things” (IoT). Polyanskiy is a member of the of the Laboratory for Information and Decision Systems, the Institute for Data, Systems, and Society, and the Statistics and Data Science Center.

Today, people carry around a smartphone and maybe a couple smart devices. Whenever you watch a video on your smartphone, for example, a nearby cell tower assigns you an exclusive chunk of the wireless spectrum for a certain time. It does so for everyone, making sure the data never collide.

The number IoT devices is expected to explode, however. People may carry dozens of smart devices; all delivered packages may have tracking sensors; and smart cities may implement thousands of connected sensors in their infrastructure. Current systems can’t divvy up the spectrum effectively to stop data from colliding. That will slow down transmission speeds and make our devices consume much more energy in sending and resending data.

“There may soon be a hundredfold explosion of devices connected to the internet, which is going to clog the spectrum, and there will be no way to ensure interference-free transmission. Entirely new access approaches will be needed,” Polyanskiy says. “It’s the most exciting thing I’m working on, and it’s surprising that no one is talking much about it.”

From Russia, with love of computer science

Polyanskiy grew up in a place that translates in English to “Rainbow City,” so named because it was founded as a site to develop military lasers. Surrounded by woods, the city had a population of about 15,000 people, many of them engineers.

In part, that environment got Polyanskiy into computer science. At the age of 12, he started coding — “and for profit,” he says. His father was working for an engineering firm, on a team that was programming controllers for oil pumps. When the lead programmer took another position, they were left understaffed. “My father was discussing who can help. I was sitting next to him, and I said, ‘I can help,’” Polyanskiy says. “He first said no, but I tried it and it worked out.”

Soon after, his father opened his own company for designing oil pump controllers and brought Polyanskiy on board while he was still in high school. The business gained customers worldwide. He says some of the controllers he helped program are still being used today.

Polyanskiy earned his bachelor’s in physics from the Moscow Institute of Physics and Technology, a top university worldwide for physics research. But then, interested in pursuing electrical engineering for graduate school, he applied to programs in the U.S. and was accepted to Princeton University.

In 2005, he moved to the U.S. to attend Princeton, which came with cultural shocks “that I still haven’t recovered from,” Polyanskiy jokes. For starters, he says, the U.S. education system encourages interaction with professors. Also, the televisions, gaming consoles, and furniture in residential buildings and around campus were not placed under lock and key.

“In Russia, everything is chained down,” Polyanskiy says. “I still can’t believe U.S. universities just keep those things out in the open.”

At Princeton, Polyanskiy wasn’t sure which field to enter. But when it came time to select, he asked one rather discourteous student about studying under a giant in information theory, Sergio Verdú. The student told Polyanskiy he wasn’t smart enough for Verdú — so Polyanskiy got defiant. “At that moment, I knew for certain that Sergio would be my number one pick,” Polyanskiy says, laughing. “When people say I can’t do something, that’s usually the best way to motivate me.”

At Princeton, working under Verdú, Polyanskiy focused on a component of information theory that deals with how much redundancy to send with data. Each time data transmit, they are perturbed by some noise. Adding duplicate data means less data get lost in that noise. Researchers thus study the optimal amounts of redundancy to reduce signal loss but keep transmissions fast.

In his graduate work, Polyanskiy pinpointed sweet spots for redundancy when transmitting hundreds or thousands of data bits in packets, which is mostly how data are transmitted online today.

After earning his PhD in electrical engineering from Princeton, Polyanskiy finally did come to MIT, his “dream school,” in 2011, but as a professor. MIT had helped pioneer some information theory research and introduced the first college courses in the field.

Some call information theory “a green island,” he says, “because it’s hard to get into but once you’re there, you’re very happy. And information theorists can be seen as snobby.”  When he came to MIT, Polyanskiy says, he was narrowly focused on his work. But he experienced yet another cultural shock — this time in a collaborative and bountiful research culture.

MIT researchers are constantly presenting at conferences, holding seminars, collaborating, and “working on about 20 projects in parallel,” Polyanskiy says. “I was hesitant that I could do quality research like that, but then I got hooked. I became more broad-minded, thanks to MIT’s culture of drinking from a fire hose. There’s so much going on that eventually you get addicted to learning fields that are far away from you own interests.”

In collaboration with other MIT researchers, Polyanskiy’s group now focuses on finding ways to split up the spectrum in the coming IoT age. So far, his group has mathematically proven that the systems in use today do not have the capabilities and energy to do so. They’ve also shown what types of alternative transmission systems will and won’t work.

Inspired by his own experiences, Polyanskiy likes to give his students “little hooks,” tidbits of information about the history of scientific thought surrounding their work and about possible future applications. One example is explaining philosophies behind randomness to mathematics students who may be strictly deterministic thinkers. “I want to give them a little taste of something more advanced and outside scope of what they’re studying,” he says.

After spending 14 years in the U.S., the culture has shaped the Russian native in certain ways. For instance, he’s accepted a more relaxed and interactive Western teaching style, he says. But it extends beyond the classroom, as well. Just last year, while visiting Moscow, Polyanskiy found himself holding a subway rail with both hands. Why is this strange? Because he was raised to keep one hand on the subway rail, and one hand over his wallet to prevent thievery. “With horror, I realized what I was doing,” Polyanskiy says, laughing. “I said, ‘Yury, you’re becoming a real Westerner.’”

The tenured engineers of 2018

Gearing up for the internet of things