Kofi Blake is bringing people together 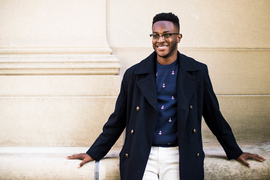 ↓ Download Image
Caption: “The more I talk to recent graduates, the more I realize that there’s so many powerful people that slept in the same bed as I have. They struggled with the same classes, the same feelings, but now they’re leaders and scholars,” MIT’s senior class president Kofi Blake says.
Credits: Photo: Adam Glanzman 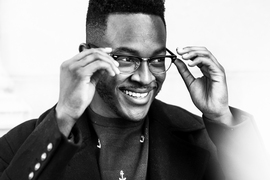 Caption:
“The more I talk to recent graduates, the more I realize that there’s so many powerful people that slept in the same bed as I have. They struggled with the same classes, the same feelings, but now they’re leaders and scholars,” MIT’s senior class president Kofi Blake says.
Credits:
Photo: Adam Glanzman

It was the middle of his first night at MIT, but Kofi Blake couldn’t sleep. Instead, he was waiting anxiously outside the door to be let into a residential hall called Chocolate City. The current members were having their house meeting, and it was carrying on for much longer than expected. Blake, then a high school senior visiting for an event called Weekend Immersion in Science and Engineering (WISE), could feel his curiosity growing with every minute.

When the doors finally opened, Blake stepped inside to find a room full of students who had been excitedly planning for his arrival. The wait was worth it. The Chocolate City brothers welcomed him with pride, sharing with him their personal experiences and what it meant to be Black at MIT. That was the night when he found his community, recalls Blake, who is now a senior double-majoring in aerospace engineering and physics, with a minor in political science.

“There weren’t that many Black people where I went to high school. I never knew what it was like to go to school around others who looked like me and were into the same type of things,” Blake says. “Now, after four years of living in Chocolate City, I’ve really gotten to see the support that comes from within the brotherhood. They’re why I came to MIT.”

The organization was founded in 1975, at a time when Black men were struggling at MIT. The lack of a support system was leading to students with lower GPAs and higher dropout rates. Today, Chocolate City acts as a living community, providing growth and leadership opportunities for its members.

Throughout his career at MIT, Blake has been focused on uniting the Black community on campus by supporting his fellow brothers academically, socially, and professionally. He began by serving as Chocolate City’s historian his first year due to his love for photography, and is now the senior co-chair of the organization.

This past summer, Chocolate City used its platform to advocate and fundraise for the Black Lives Matter movement. Blake and his brotherhood worked together to raise $2,000 for different social justice organizations. Their call to action inspired other MIT cultural organizations as well, who also raised awareness and money using social media.

Blake has served as the student body president of the Class of 2021 throughout all of his four years at MIT. “It was actually a Chocolate City brother who inspired me to run,” he recalls. “He explained to me how you get to advocate for the class and put on fun events that bring people together. That really got me interested!”

Yet, it wasn’t until the campaigning process that Blake truly began to develop an appreciation for the complexities of the role. Class presidents must connect with peers and work with the MIT administration to plan social events that will engage the entire student population. Along the way, he met with hundreds of students and listened to what they each wanted out of Class Council. By the end of the race, Blake felt he had an even deeper understanding of the importance of diversity.

“The role really makes you appreciate just how many different people there are [in terms of] race, ethnicity, sexuality, background, thought. People will come to the table and they have so much to offer,” Blake says. “You have that realization and then you take it to whatever you’re doing to try and make something that accommodates everyone. It’s been a humbling experience.”

One of Blake’s accomplishments as class president was organizing a field trip to the Six Flags amusement park for over 200 students. The planning process began with building a consensus on how to use the budget, which became a major challenge with so many students involved. Ideas ranged from Marvel movie screenings to inviting Michelle Obama as commencement speaker. “People will ask for some pretty interesting things,” Blake says, laughing.

Eventually, the idea came together, and soon Blake found himself and his classmates on a bus heading out to western Massachusetts. They spent that Saturday jumping between rides and recharging before another challenging semester. Blake remembers the event as one of his favorite experiences at MIT.

“There’s no greater feeling than when you’re with all your classmates and they’re having a great time. The students are really appreciative.” Blake says. Despite the many conflicting suggestions, he had finally found a way to bring people together through the simple joy of having fun.

In addition to representing over 1,100 students on campus, Blake has also worked to encourage more minority students in STEM. Last spring, he collaborated with a team of Boeing engineers to develop aerospace curriculum to teach local high school students.

The classes were taught through MIT’s OEOP SEED Academy and touched on fundamental concepts in aerospace engineering. For many students, Blake’s class was their first introduction to the world of flight. While learning about everything from conservation of momentum to the rocket equation, students could determine whether this was a field that they might want to pursue further.

Blake made it his mission to share his passion for the technical challenges of aerospace engineering alongside words of encouragement. “It’s intimidating to look toward academia and industry and not see yourself represented,” he says. “I wanted to teach the students to never let their identities hold them back. To me, Black excellence is the standard, not the exception.”

Blake sees himself entering academia after graduation. His current research focuses on improving space propulsion systems. Combining his technical and political science classes, he hopes to one day serve in a position of national space policy leadership. Along with advancing aerospace technology, Blake aspires to make the field more inclusive by serving as a mentor and role model.

“After teaching younger kids, I’ve found that they’re so eager to learn — you just have to put the content in front of them. When we value their input and respect them, there’s nothing they won’t do.”

Blake credits MIT’s Black alumni, many of whom were previously a part of Chocolate City, as his own source of motivation. Their determination to succeed against all boundaries is evidence that the support of a community makes anything possible, he says.

“The more I talk to recent graduates, the more I realize that there’s so many powerful people that slept in the same bed as I have. They struggled with the same classes, the same feelings, but now they’re leaders and scholars,” Blake says.

“I want that to be something that every student like me believes — that we’re going to come together. We’re going to be the ones to break these barriers.”

A champion of renewable energy