Communicating the “beauty and complexity” of science 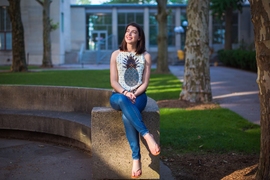 ↓ Download Image
Caption: “I think when someone manages to make a scientific concept beautiful, it explains to people outside science how beautiful science can be. And that, I think, should be the goal of any science writer,” says Fernanda de Araújo Ferreira.
Credits: Image: Gretchen Ertl 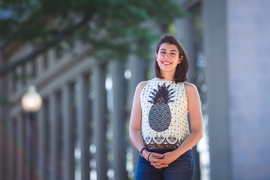 Caption:
“I think when someone manages to make a scientific concept beautiful, it explains to people outside science how beautiful science can be. And that, I think, should be the goal of any science writer,” says Fernanda de Araújo Ferreira.
Credits:
Image: Gretchen Ertl

“Grad school was a reality check. Once you choose to pursue a PhD, your life is kind of mapped out for you,” she explains. “But when I started grad school, I immediately saw the annoying parts of academia: writing five grants and getting one, and labs being shut down for lack of funding. And it just seemed very unstable.”

Rather than let these dynamics disillusion her, Ferreira decided to channel her enthusiasm for science into writing. After completing her doctorate in 2019, she entered MIT’s Graduate Program in Science Writing (GPSW) through MIT Comparative Media Studies/Writing — a decision that opened her up to science in an altogether different way.

“As much as I loved doing research, a PhD leads you to know absolutely everything there is to know about absolutely nothing,” she says. “There’s so much cool science out there, but as you progress toward a PhD, it gets narrower and narrower.” A career in science journalism, she adds, is a way to open that up again. “And I can still write about viruses, but I can write about other areas, as well!”

GPSW is a one-year master’s program that centers on science journalism through a variety of media, from print to podcasts to data visualization. The program consists of six required and two elective courses, as well as a 6,000-word creative nonfiction thesis in which candidates demonstrate their ability to engage with a scientific topic from a variety of viewpoints — historically, culturally, and scientifically.

Ferreira takes special care to incorporate cultural signifiers into all of her science writing. When writing about Microsoft’s inadvertently trollish Twitter bot Tay, for example, Ferreira opened with ELIZA, an early chatterbot named after Eliza Doolittle, the protagonist of George Bernard Shaw’s play “Pygmalion.” It’s Ferreira’s way of reminding her readers that science is a deeply human endeavor, intertwined with the culture from which it emerges.

Keeping the science in journalism

In retrospect, she concedes, Ferreira’s shift from academia to science journalism isn’t all that surprising. Before majoring in biology, she considered studying writing and history. Right before graduate school, she recalls seeing an error in an article in a Brazilian local newspaper. “It had confused Biosafety Level 4 agents, which are a mix of viruses and bacteria, acting as if all BSL4 agents were viruses. And I thought, if they were making this very silly mistake about viruses, what other mistakes were they making about much more complicated areas of research?”

Ferreira believes that good science journalism should combat mistakes like these. And as science grows more complicated, she knows that her doctorate will become even more useful.

“A PhD helps you understand how science is done because you’ve also done science,” says Ferreira, who has also written articles for MIT News as an intern in the School of Science. “And it gives you a respect for the materials and methods section, which is where you discover if a paper is actually good or not. Some people will skip it, which fills me with horror, because there are papers that get so much attention in media because the concept is interesting, but if you read them, you see that they never proved what they say.”

In a world of headline-driven news, journalists with science training are ever more critical. As a virologist, Ferreira has seen this firsthand during the Covid-19 pandemic. “Science journalists are reporting on research as it’s being done, and not all research is done equally,” she says. “So journalists who can look beyond a paper’s conclusions and read the material and methods, look at the results, and see whether those support the paper’s conclusions, are essential.”

Science journalists who can put the pandemic into context are also important. For example, the roots of many viral epidemics are in deforestation, Ferreira says. “With deforestation, there’s not a huge buffer zone between the wild and large, urban communities. If you have a small, rural community and a virus spills over there, the amount of people infected is relatively small, but if it spills into an urban community, then you have way more people who can be infected and the outbreak is harder to control.”

For her master’s thesis, Ferreira focused on a somewhat less weighty topic: the possibility of designing a comfortable high-heeled shoe. “What’s nice about [this] piece is it’s not just straight science. I had to look at social pressures and history and anecdote, which made it really fun,” she says. For her thesis, Ferreira spoke to shoe historians, shoe designers and engineers, and podiatrists and other doctors, as well as the founder of a company that claims to have created more comfortable heels. “I even bought a pair, which I wore exactly once,” she says.

Ferreira’s transition to MIT was a smooth one, involving a move across the Charles River, from Fenway to Cambridgeport. She still maintains most of her Harvard graduate school friends. Newly integrated into her social life are her classmates from MIT’s GPSW, adding a rich third layer to her world.

“It’s strange because the conversations are so different!” she says. “In lab, there are a number of techs applying to med school, so you’re talking about that. And your friends who graduated are all talking about jobs and working in industry, while PhD friends are still talking about defense schedules. And my friends in GPSW are talking about this deadline and the next story you have to write. It’s kind of like jumping between worlds!”

Traveling among worlds is a favorite pastime of Ferreira’s, who before Covid-19 attended local theater productions once or twice a month. In fact, she and her mother bookended her PhD defense last September with local performances of “Six” and “Choir Boy.”

“If you go to the cinema or theater, you turn off your phone for two hours and its fully immersive,” Ferreira says. “Yes, the world continues to exist beyond it, but you’re in this other world for a bit. If the play is really good and you’re in the right state of mind, three hours can just fly by, and you come out of it knowing so much more about the world.” Good writing, she believes, has the same effect. “And I would hope that my writing is also able to grab someone for a few minutes and present them with this whole other world.”

After all her academic twists and turns, Ferreira simply feels compelled to bring the beauty and complexity of science to the rest of the world: “I think when someone manages to make a scientific concept beautiful, it explains to people outside science how beautiful science can be. And that, I think, should be the goal of any science writer.”

Unlocking the secrets of a plastic-eater

Bridging the gap between citizens and scientists