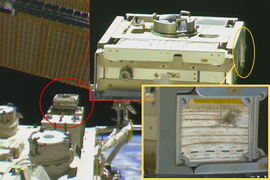 ↓ Download Image
Caption: A team of MIT researchers has sent a panel of passive smart fabric samples to the International Space Station for a year to help determine how well these fabrics survive low Earth orbit.
Credits: Image: Courtesy of Space BD/JAXA and edited by MIT News

Caption:
A team of MIT researchers has sent a panel of passive smart fabric samples to the International Space Station for a year to help determine how well these fabrics survive low Earth orbit.
Credits:
Image: Courtesy of Space BD/JAXA and edited by MIT News

Earlier this month a team of MIT researchers sent samples of various high-tech fabrics, some with embedded sensors or electronics, to the International Space Station. The samples (unpowered for now) will be exposed to the space environment for a year in order to determine a baseline for how well these materials survive the harsh environment of low Earth orbit.

The hope is that this work could lead to thermal blankets for spacecraft, that could act as sensitive detectors for impacting micrometeoroids and space debris. Ultimately, another goal is new smart fabrics that allow astronauts to feel touch right through their pressurized suits.

Three members of MIT’s multidisciplinary team, graduate students Juliana Cherston of the Media Lab, and Yuchen Sun of the Department of Chemistry, and postdoc Wei Yan of the Research Laboratory of Electronics and the Department of Materials Science and Engineering, discussed the experiment’s ambitious aims with MIT News.

Q:​ Can you describe the fabric samples that you sent to the International Space Station, and what kinds of information you are hoping to get from them after their exposure in space?

Cherston: The white color of the International Space Station is actually a protective fabric material called Beta cloth, which is a Teflon-impregnated fiberglass designed to shield spacecraft and spacesuits from the harsh elements of low Earth orbit. For decades, these fabrics have remained electrically passive, despite offering large-area real estate on the exterior of space assets.

We imagine turning this spacecraft skin into an enormous space debris and micrometeoroid impact sensor. The samples that we worked with JAXA, the Japanese space agency, and Space BD to send to the International Space Station incorporate materials like charge-sensitive synthetic fur — an early concept — and vibration-sensitive fiber sensors — our project’s focus — into space-resilient fabrics. The resulting fabric may be useful for detecting cosmic dust of scientific interest, and for damage detection on spacecraft.

It’s easy to assume that since we’re already sending these materials to space, the technology must be very mature. In reality, we are leveraging the space environment  to complement our important ground-testing efforts. All of these fabric sensors will remain unpowered for this first in-space test, and the quilt of samples occupies a total area of 10 by 10 centimeters on the exterior walls of the station.

Our focus is on baselining their resiliency to the space environment. In one year, these samples will return to Earth for postflight analysis. We’ll be able to measure any erosion from atomic oxygen, discoloration from UV radiation, and any changes to fiber sensor performance after one year of thermal cycling. There is some chance that we will also find hints of micron-scale micrometeoroids. We’re also already preparing for an electrically powered deployment currently scheduled for late 2021 or early 2022 (recently awarded to the project by the ISS National Lab). At that point we’ll apply an additional protective coating to the fibers and actually operate them in space.

Yan: The fabric samples contain thermally drawn “acoustic” fibers developed with ISN funding that are capable of converting mechanical vibration energy into electric energy (via the piezoelectric effect). When micrometeoroids or space debris hit the fabric, the fabric vibrates, and the “acoustic” fiber generates an electrical signal. Thermally drawn multimaterial fibers have been developed by our research group at MIT for more than 20 years; what makes these acoustic fibers special is their exquisite sensitivity to mechanical vibrations. The fabric has been shown in ground facilities to detect and measure impact regardless of where the space dust impacted the surface of the fabric.

Q: What is the ultimate goal of the project? What kinds of uses do you foresee for advanced fabrics in the space environment?

Cherston: I am particularly keen to demonstrate that instrumentation useful for fundamental scientific inquiry can be incorporated directly into the fabric skin of persistent spacecraft, which to date is unused and very precious real estate. In particular, I am beginning to evaluate whether these skins are sensitive enough to detect cosmic dust produced in million-year-old supernova explosions tens or hundreds of light-years away from Earth. Just last year, an isotopic signature for this type of interstellar dust was discovered in fresh Antarctic snow, so we believe that some of this dust is still whizzing around the solar system, holding clues about the dynamics of supernova explosions. In-situ characterization of their distribution and kinematics is currently my most ambitious scientific goal.

Some students in my group have also developed a conceptual prototype in which sensory data on the exterior skin of a pressurized spacesuit armband is mapped to haptic actuators on the wearer’s biological skin. Using this system, astronauts will be able to feel texture and touch right through their spacesuits! This direct experience of a new environment is very central to humanity’s drive to explore.

An impact-sensitive skin can also be used for damage detection on persistent space craft. In practice, the fabric’s ability to localize damage from space debris and micrometeoroids is how we will really sell the concept to aerospace engineers.

Yan: Although the space age began 63 years ago when Soviet Union’s Sputnik 1 was launched into an elliptical low Earth orbit, many unanswered questions remain regarding the effect of the space environment on humans, as well as the safety of astronauts as they operate in the space environment. While our project’s main focus has been on augmenting fabrics used on the exterior of spacecraft, I also envision that future spacesuits will be electrically active and highly multifunctional.

Textiles buried within the suit will be able monitor the health condition of astronauts in real time by interrogating physiological signals over large areas. Fabrics may also serve as  localized heating and cooling systems, radiation dosimeters, and efficient communications infrastructure (via fabric optics and acoustics). They may harvest solar energy as well as small amounts of energy from vibration, and store this energy in fiber batteries or supercapacitors, which would allow the system to be self-powered. Fabrics might even serve as part of an exoskeleton that assists astronauts in maneuvering on planetary bodies and in microgravity. One broad vision at play is to pack an enormous amount of function into space resilient textiles, creating an analogue of “Moore’s law” for space fabrics.

​​​Q: What got you interested in this subject, and what has this experience been like for you in getting the materials ready to be sent into space?

Yan: Space is definitely a new frontier for our research, while lots of terrestrial applications have been envisioned in ambient conditions and even under water. From low Earth orbit to planetary bodies, space is a unique environment with atomic oxygen, radiation, high speed impactors, and extreme temperature cycling. How will the fibers and fabrics perform there and what changes will be induced in the fiber materials? How should electronic fabrics be designed in order to meet demands of aerospace applications? There are so many scientific and technological questions.

Sun: Our group [with professor of chemistry Keith Nelson] strives to push the limits of what is experimentally achievable for impact testing, and we are always excited by a new challenge. Recently, we have been venturing into the area of high-speed mechanics, testing novel materials spanning polymers, thin films, and nanoarchitected materials using a laser accelerator facility designed by our lab to impinge tiny particles on target surfaces at speeds exceeding 1 kilometer per second.

When the idea emerged to test a material capable of detecting impact signatures in low Earth orbit and beyond, there was immediate interest on our side since it is fundamentally different from our previous research focus. These experiments are certainly more difficult and complex than what we are used to, with many more active parts to maintain. I think we were all quite pleasantly surprised when our preliminary impact experiments were successful and encouraging.

Cherston: While space launches are exciting, in reality some of our most convincing data to date has come from impact testing on the ground. Initially, it was not at all obvious that a fabric sensor with sparsely integrated sensing elements could actually detect such small and fast particles. There were a really great few minutes at our first serious impact testing campaign during which Yuchen gradually increased the number of particles accelerated onto our sensor, while holding all other aspects of the experiment constant. The growing signal was a smoking gun indication that we were seeing a true impact signature.

On a personal level, I’m really fascinated by the idea of leveraging very unconventional technology like fabric for questions of scientific significance. And I think the idea of feeling right through a pressurized spacesuit is delightful!