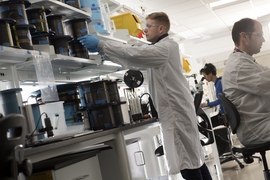 In the summer of 2018, a team led by MIT researchers reported in the journal Nature that they had successfully embedded electronic devices into fibers that could be used in fabrics or composite products like clothing, airplane wings, or even wound dressings. The advance could allow fabrics or composites to sense their environment, communicate, store and convert energy, and more.

Research breakthroughs typically take years to make it into final products — if they reach that point at all. This particular research, however, is following a dramatically different path.

By the time the unique fiber advance was unveiled last summer, members of Advanced Functional Fabrics of America (AFFOA), a not-for-profit near MIT, had already developed ways to increase the throughput and overall reliability of the process. And, staff at Inman Mills in South Carolina had established a method to weave the advanced fibers using a conventional, industrial manufacturing-scale loom to create fabrics that can use light to both broadcast and receive information.

Today, less than a year after the technology was first introduced to the world, around a quarter of a million semiconducting devices have been embedded in fibers using the patented technology, and companies like New Balance, VF, Bose, and 3M are seeking ways to use the technology in their products.

“AFFOA is helping cutting-edge basic research to reach market-ready scale at unprecedented velocity,” says Yoel Fink, CEO of AFFOA and a professor of materials science and electrical engineering at MIT. “Chip-containing fibers, which were just recently a university research project, are now being produced at an annual rate of half a million meters. This scale allows AFFOA to engage dozens of companies and accelerate product and process development across multiple markets simultaneously.”

Fink says that AFFOA’s work is unleashing a “Moore’s Law for fibers,” wherein the basic functions of fibers will grow exponentially in the coming years, allowing companies to develop value-added fabric and composite products and services. “Chip-containing fibers present a real prospect for fabrics to be the next frontier in computation and AI,” he says.

Sowing the seeds of fabric innovation

In 2015, MIT President L. Rafael Reif called for the formation of public-private partnerships he named “innovation orchards,” to reduce the time it takes new ideas to make an impact on society. Specifically, he wanted to make tangible innovations as easy to deploy and test as digital ones.

Later that year, AFFOA was formed by MIT and other key partners to accept Reif’s challenge and take advantage of recent breakthroughs in fiber materials and textile-manufacturing processes.

“The gap between where research ends and product begins is the so-called valley of death,” Fink says. “President Reif introduced the concept of orchards of innovation as a way for us, as a university, to organize these collaboration centers for technology to help bridge basic research to the market entry point.”

In 2016, AFFOA was selected by the federal government to serve as the new Revolutionary Fibers and Textiles Manufacturing Innovation Institute, receiving more than $75 million in government funding and nearly $250 million in private investments to support U.S. based, high-volume production of these new technologies.

Since then, speed has been paramount at AFFOA. As MIT and other research entities have advanced the field, AFFOA has helped facilitate pilot production of these sophisticated textiles and fabrics so companies can engage consumers with small batches of advanced fabric products, or prototypes, in a manner similar to how software companies roll out minimally viable products to quickly gather feedback from customers and consumers.

Fabrics at the speed of software

A key element in the success of software has been the ability to rapidly prototype and test products with the target customer. Tangible products, on the other hand, experience a much more difficult path to consumers, and fabrics are no exception. The reason for this is the absence of efficient prototyping mechansims at scale.

To allow fabric products to move faster to market, AFFOA has created a national prototyping network with dozens of domestic manufacturers and universities, allowing it to rapidly test advanced fabric products directly with customers.

The prototyping network is currently actively pursuing more than 30 projects, called MicroAwards, with industry and academia designed to incorporate the latest advances in fibers and textiles into mass manufacturing processes. Industry and academic participants are required to operate within short timeframes, typically 90 days or less and divided into two week sprints.

For instance, Teufelberger, a manufacturer of ropes located in Fall River, Massachusetts, is working with AFFOA on integrating advanced fibers into their braided ropes. The ropes can help climbers or divers communicate or store information on how the rope was used.

At the end of May, AFFOA will roll out at the Augmented Reality Expo a fabric augmented-reality experience that will allow conference attendees to connect with each other using AFFOA’s fabric LOOks system.

The fabric of entrepreneurship and education

AFFOA has also partnered with schools such as the Fashion Institute of Technology in New York and the Greater Lawrence Technical School, where students are learning how to design and make an advanced chip-containing fibers, as well as other skills related to manufacturing advanced functional fabrics and the products that will emerge from them.

AFFOA is currently evaluating the prospects of raising an investment fund dedicated to funding startups in the advanced fabric sector.

For Fink, AFFOA’s work is about turning fabric, an ancient yet largely unchanged material, into a new platform for innovation.

“Fabrics occupy a very significant real estate, the surface of our bodies, and yet we’re not doing much with that real estate — it’s underdeveloped,” Fink says. “AFFOA is setting the stage for a fabric revolution by allowing these ancient forms to become high tech and deliver value-add services in the years ahead.”