Harvard University Professor Evelyn Hu opened the 2020 Mildred S. Dresselhaus Lecture with a question: In an imperfect world, is perfection a necessary precursor for transformative advances in science and engineering?

Over the course of the next hour, for a virtual audience of nearly 300, the Tarr-Coyne Professor of Applied Physics and Electrical Engineering at the John A. Paulson School of Engineering and Applied Sciences at Harvard University argued that, at the nanoscale, there must be more creative ways to approach materials. By looking at what nature gives us in terms of electron energy levels, phonons, and a variety of processes, Hu said, scientists can re-engineer the properties of materials.

To illustrate her point, Hu described the effect of defects — vacancies or missing atoms — in otherwise perfect crystalline semiconductors. In transforming these defects, Hu demonstrated how unique properties at the nanoscale involving quantum confinement can profoundly change electron density of states. Hu’s talk exemplified the exceptional scholarship and leadership that have defined her career, says Vladimir Bulović, the founding faculty director of MIT.nano.

“Professor Hu has developed groundbreaking techniques for designing at the nanoscale, used those techniques to produce extraordinary innovations, and extended her impact through inspirational mentorship and teaching,” says Bulović, who is also the Fariborz Maseeh Professor of Emerging Technologies. “We were honored to have her present this year’s Dresselhaus Lecture."

Hu attended the same high school as Dresselhaus — Hunter College High School in New York City — a coincidence that “was like a good luck talisman to me,” she said. “It gives me such great pleasure to try and express my gratefulness to Millie for all the guidance and mentorship she’s given to me from the time I was a graduate student … and the inspiration that she's given to us all.” 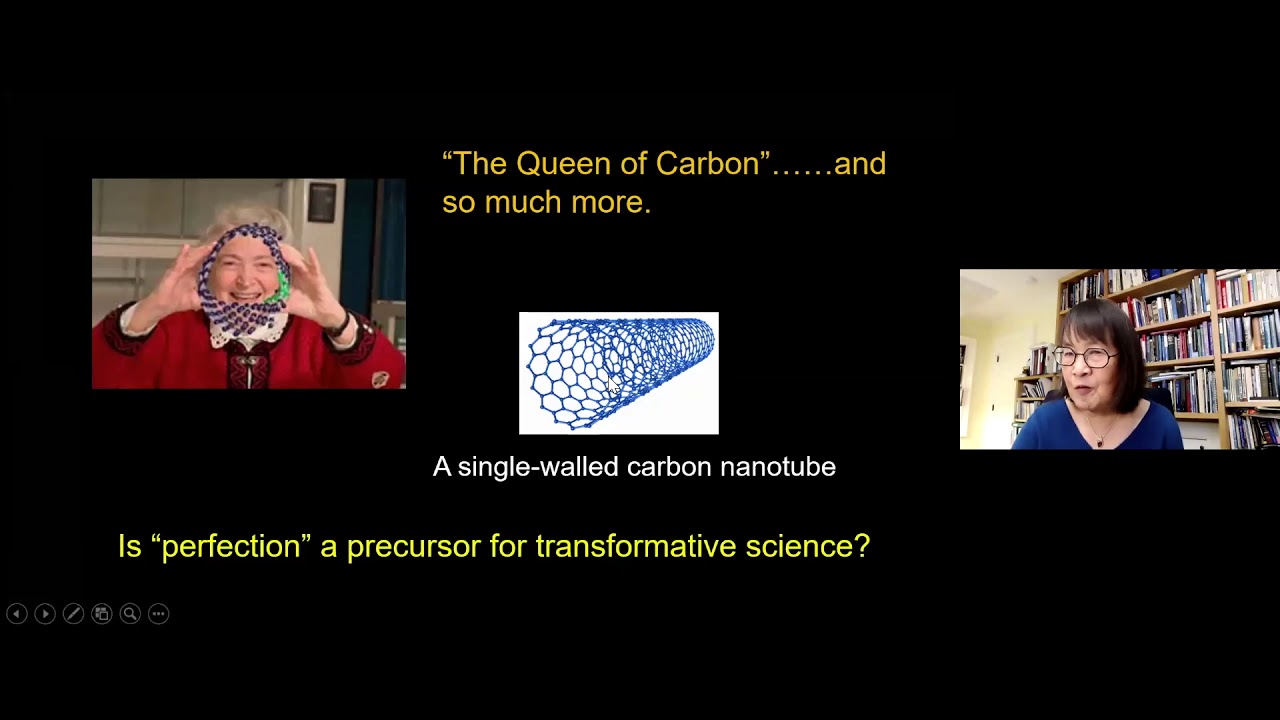 Inspired by Dresselhaus’s work in the early 1990s to rethink thermoelectric materials, Hu’s research group is working on new ways to engineer materials that can exhibit a combination of photon correlation and spin coherence. Her talk showcased how silicon vacancies in silicon carbide, when integrated within nanoscale optical cavities, can result in a controlled output of light. The integrated defect-cavity system can also serve as a “nanoscope” into the material, allowing scientists to learn about the interactions with surrounding defects, providing broader insights into long-term quantum coherence.

Hu displayed an image of a perfect, single crystal semiconductor, then quickly disrupted that perfection by removing the silicon atoms to create a silicon vacancy. Changing the material in this way allows her to look for opportunities, she said. “Think of vacancies not as something missing,” Hu explained, “but as atom-like entities with particular electronic and spin states embedded in a complex, wide bandgap environment. The silicon vacancy has ground and electronic states. It also has an electron spin.”

In order to obtain enough signal from this single atomic scale defect, Hu manipulates the nanoscale to create an integrated environment for the silicon vacancies that she calls a cavity. “Think of this as a breakout room,” she says. “A place our atomic-scale silicon vacancy can be in an intimate and isolated conversation with its environment.”

The cavity recycles the photon energy as it goes back and forth between the emitter and this environment. When the silicon vacancy is placed within this cavity, the signal-to-noise is enormously better, Hu said.

At the end of her lecture, Hu answered audience questions ranging from scalability of her work and mathematical models that enumerate these discoveries, to limiting factors and the use of molecules as active spin states as compared to crystalline semiconductors. Hu concluded her talk by reflecting on Dresselhaus’s legacy, not only as a great scientist but as someone who was beloved.

This word, she says, means a degree of trust, of willingness to follow, to believe, to listen to. “For a scientist and engineer to be beloved in that way, and to have trust in that way, makes the difference between effectiveness and the ability to affect change.”

Hu was the second speaker to deliver the Dresselhaus Lecture. Established in 2019 to honor the late MIT physics and electrical engineering professor Mildred Dresselhaus, the “Queen of Carbon Science,” the annual event features a speaker selected by a committee of MIT faculty from a list of nominations submitted by the MIT community, scholars from other institutions and research laboratories, and members of the general public. The process and lecture are coordinated by MIT.nano, an open access facility for nanoscience and nanoengineering of which Dresselhaus was a strong faculty supporter.

Muriel Médard, the Cecil H. Green Professor in MIT’s Department of Electrical Engineering and Computer Science, opened the lecture with an invitation to nominate candidates for a new honor named for Dresselhaus by the Institute of Electrical and Electronics Engineers (IEEE). Established in 2019, the IEEE Mildred Dresselhaus Medal will honor an individual for outstanding technical contributions in science and engineering of great impact to IEEE fields of interest. “We’re really looking for people who have had an impact that goes beyond the technical,” says Médard. “Do consider nominating a worthy colleague, somebody whom you feel reflects well the kind of qualities that made Millie so remarkable.”

Nominations for the 2021 Dresselhaus Lecture are broadly accepted and can be submitted on MIT.nano’s website at any time. Any significant figure in science and engineering from anywhere in the world may be nominated.