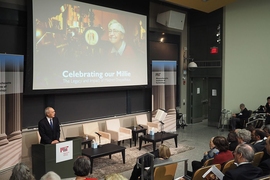 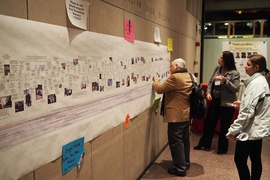 They came from around the globe to commemorate a beloved mentor, collaborator, teacher, and world-renowned pioneer in solid-state physics and nanoscale engineering.

Dresselhaus, an MIT faculty member for more than half a century, passed away at age 86 on Feb. 20, after a career in which she led in the development of numerous fields within materials science and engineering, particularly those related to the electronic structure of carbon. For her many accomplishments, Dresselhaus earned copious national and international accolades — including the National Medal of Science, the Kavli Prize, the Presidential Medal of Freedom, and worldwide recognition as the “Queen of Carbon.”

But Dresselhaus’ support of others, especially of women and underrepresented minorities; her service to local and national science and engineering societies; and her devotion to students and family were evidenced in equal measure at Sunday’s event, which drew a capacity crowd to Room 10-250 and to sessions in the lobbies of buildings 10 and 13.

“The first thing Millie taught me was the power of noticing,” MIT President L. Rafael Reif, who began at the Institute as a young professor in Dresselhaus’ home department of Electrical Engineering and Computer Science, said in his opening remarks. “Noticing patterns that others don’t see is essential to becoming and being a great scientist, and Millie surely had that gift.”

“But she used her amazing mind and heart to notice people, too,” Reif added. Dresselhaus, who as a student received guidance and encouragement from eminent physicists Rosalyn Yalow and Enrico Fermi, understood that “being noticed by the right person at the right time” could change the course of one’s career. And so, Reif explained, “Millie made part of her life’s work to notice others.”

Guests from various periods of Dresselhaus’ life filled the day with stories of her impact as a researcher and as a member of numerous communities, both at MIT and beyond.

In one session, colleagues from Mexico, Japan, Belgium, and elsewhere described Dresselhaus’ seminal contributions to the development of carbon science — from her work with graphite in the 1970s and 80s, to fullerines in the 1990s, to nanotubes in the 2000s, and back to graphite and two-dimensional graphene in the 2010s. Another session concentrated on her pioneering research developing nanomaterials in thermoelectrics, an area focused on turning temperature differences in materials into electricity.

One presentation slide depicted Dresselhaus’ extensive “family tree” of academic influence, which, based on publication citations, included some 900 collaborations over a half-century of research. A printed timeline, several dozen feet long, of life events and key scientific activities compiled by Dresselhaus’ granddaughter Shoshi Cooper gave attendees a visceral sense of the Institute Professor’s myriad travels, connections, and influences around the world.

But collaborators were often much more than just research partners; in many cases, they became lifelong friends — or family members. This began in the late 1950s with Dresselhaus’ partner in science and in life, husband and MIT staff researcher Gene Dresselhaus, who co-authored many papers and, as President Reif noted, four children. But it continued with her mentoring of dozens of graduate students and her connections to individuals across many realms of science research and education.

“What Millie and Gene gave me was deep encouragement,” said MIT colleague Jing Kong, a professor in the Department of Electrical Engineering and Computer Science. “I’m so thankful for what Millie has taught me and shown me. … I hope we can carry on [her] legacy.”

Dresselhaus’ service to society — whether as director of the U.S. Department of Energy’s Office of Science or as president of the American Physical Society (APS) and the American Association for the Advancement of Science, was also on display, as was her devotion to improving conditions for women and underrepresented minorities in science and engineering, both at MIT and elsewhere. Laurie McNeil, a former postdoc who is now a professor of physics at the University of North Carolina at Chapel Hill, described Dresselhaus’ leadership in developing for the APS a nationwide Climate for Women Site Visit Program, which represented a critical step in helping physics departments improve support for female students and faculty.

Closer to home, Institute Professor Sheila Widnall of the Department of Aeronautics and Astronautics, who spoke to attendees via prerecorded video, described some of the many positive changes Dresselhaus helped to bring about for women at MIT, who comprised just 4 percent of the student body when Dresselhaus first joined the Lincoln Laboratory in 1960. Later that decade, after becoming only the third woman (after Emily Wick and Widnall) to join MIT’s faculty in science or engineering, Dresselhaus felt a strong responsibility to advocate on behalf of female students and colleagues, and to be available for them in various supporting roles. “We all owe Millie a debt of gratitude,” Widnall said.

Looking forward, MIT Professor and Associate Dean for Innovation Vladimir Bulovic spoke of the many ways MIT hopes to extend Dresselhaus’ legacy in years to come. He noted that her personal papers would soon be donated to MIT’s Institute Archives for future generations to explore, and that her spirit would continue on in a series of Rising Stars workshops that bring young women in science and engineering to MIT for career development and networking. Bulovic was especially enthusiastic about Dresselhaus’ mark on MIT.nano, the state-of-the-art nanoscience and nanotechnology facility rising in the middle of campus. In a nod to her assertion that “My background is so improbable — that I’d be here from where I started,” Bulovic announced that a key courtyard between MIT.nano and the Infinite Corridor will be named “the Improbability Walk” in her honor.

The final session of the evening concluded with inspiration and song. As a lifelong violinist, Dresselhaus cherished orchestral and chamber music, and would play regularly in groups and in impromptu performances with family and friends. In tribute, loved ones including daughter Marianne and granddaughters Elizabeth and Clara capped the day’s presentations with pieces by Bach, Schumann, and Brahms.

MIT Corporation Life Member Shirley Ann Jackson ’68, PhD ’73, the president of Rensselaer Polytechnic Institute and a former student of Dresselhaus (who long held a joint appointment in the Department of Physics), also provided a warm tribute to her mentor via prerecorded video. “She was a woman of extraordinary focus, and always found opportunity within adversity and constraint,” Jackson said. “Her graceful adaptability and optimism offered me an important model as I encountered and stepped through my own unexpected windows of opportunity in industry, academia, and government. … Her unwillingness to allow struggling students to quit, and her efforts to break down institutional barriers for young women in science — including me — were a call to action for all of us who followed. … I am forever grateful to Millie Dresselhaus.”

Letter to the MIT community regarding the death of Mildred Dresselhaus

3Q: Leora Cooper on the legacy of her grandmother, Mildred Dresselhaus

It takes a network