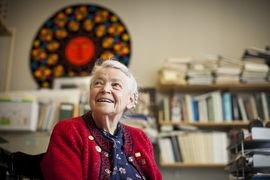 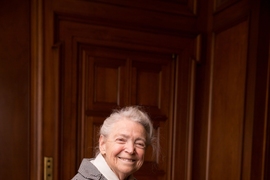 Mildred S. Dresselhaus, a celebrated and beloved MIT professor whose research helped unlock the mysteries of carbon, the most fundamental of organic elements — earning her the nickname “queen of carbon science” — died Monday at age 86.

Dresselhaus, a solid-state physicist who was Institute Professor Emerita of Physics and Electrical Engineering and Computer Science, was also nationally known for her work to develop wider opportunities for women in science and engineering. She died at Mount Auburn Hospital in Cambridge, Massachusetts, following a brief period of poor health.

“Yesterday, we lost a giant — an exceptionally creative scientist and engineer who was also a delightful human being,” MIT President L. Rafael Reif wrote in an email today sharing the news of Dresselhaus’s death with the MIT community. “Among her many ‘firsts,’ in 1968, Millie became the first woman at MIT to attain the rank of full, tenured professor. She was the first solo recipient of a Kavli Prize and the first woman to win the National Medal of Science in Engineering.”

“Millie was also, to my great good fortune, the first to reveal to me the wonderful spirit of MIT,” Reif added. “In fact, her down-to-earth demeanor was a major reason I decided to join this community. … Like dozens of young faculty and hundreds of MIT students over the years, I was lucky to count Millie as my mentor.”

A winner of both the Presidential Medal of Freedom (from President Barack Obama, in 2014) and the National Medal of Science (from President George H.W. Bush, in 1990), Dresselhaus was a member of the MIT faculty for 50 years. Beyond campus, she held a variety of posts that placed her at the pinnacle of the nation’s scientific enterprise.

Dresselhaus’s research made fundamental discoveries in the electronic structure of semi-metals. She studied various aspects of graphite and authored a comprehensive book on fullerenes, also known as “buckyballs.” She was particularly well known for her work on nanomaterials and other nanostructural systems based on layered materials, like graphene, and more recently beyond graphene, like transition metal dichalcogenides and phosphorene. Her work on using quantum structures to improve thermoelectric energy conversion reignited this research field.

A strong advocate for women in STEM

As notable as her research accomplishments was Dresselhaus’s longstanding commitment to promoting gender equity in science and engineering, and her dedication to mentorship and teaching.

In 1971, Dresselhaus and a colleague organized the first Women’s Forum at MIT as a seminar exploring the roles of women in science and engineering. She received a Carnegie Foundation grant in 1973 to support her efforts to encourage women to enter traditionally male dominated fields of science and engineering. For a number of years, she led an MIT seminar in engineering for first-year students; designed to build the confidence of female students, it always drew a large audience of both men and women.

Just two weeks ago, General Electric released a 60-second video featuring Dresselhaus that imagined a world where female scientists like her were celebrities, to both celebrate her achievements as well as to encourage more women to pursue careers in science, technology, engineering, and mathematics.

Dresselhaus co-authored eight books and about 1,700 papers, and supervised more than 60 doctoral students.

“Millie’s dedication to research was unparalleled, and her enthusiasm was infectious,” says Anantha Chandrakasan, the Vannevar Bush Professor of Electrical Engineering and Computer Science and head of MIT’s Department of Electrical Engineering and Computer Science (EECS). “For the past half-century, students, faculty and researchers at MIT and around the world have been inspired by her caring advice. I was very fortunate to have had her as a mentor, and as an active member of the EECS faculty. She made such a huge impact on MIT, and her contributions will long be remembered.”

Diverted from teaching to physics

Born on Nov. 11, 1930, in Brooklyn and raised in the Bronx, Mildred Spiewak Dresselhaus attended Hunter College, receiving her bachelor’s degree in 1951 and then winning a Fulbright Fellowship to study at Cambridge University.

While she had planned to become a teacher, Rosalyn Yalow — who would go on to win the 1977 Nobel Prize in physiology or medicine — encouraged Dresselhaus to pursue physics instead. She ultimately earned her MA from Radcliffe College in 1953 and her PhD in 1958 from the University of Chicago, where she studied under Nobel laureate Enrico Fermi. From 1958 to 1960, Dresselhaus was a National Science Foundation Postdoctoral Fellow at Cornell University.

Dresselhaus began her 57-year association with MIT in the Solid State Division of Lincoln Laboratory in 1960. In 1967, she joined what was then called the Department of Electrical Engineering as the Abby Rockefeller Mauze Visiting Professor, a chair reserved for appointments of distinguished female scholars. She became a permanent member of the electrical engineering faculty in 1968, and added an appointment in the Department of Physics in 1983.

In addition to her teaching and research, Dresselhaus served in numerous scientific leadership roles, including as the director of the Office of Science at the U.S. Department of Energy; as president of the American Physical Society and of the American Association for the Advancement of Science; as chair of the governing board of the American Institute of Physics; as co-chair of the recent Decadal Study of Condensed Matter and Materials Physics; and as treasurer of the National Academy of Sciences.

Aside from her Medal of Freedom — the highest award bestowed by the U.S. government upon American civilians — and her Medal of Science, given to the nation’s top scientists, Dresselhaus’s extensive honors included the IEEE Medal of Honor for “leadership and contributions across many fields of science and engineering”; the Enrico Fermi Award from the U.S. Department of Energy for her leadership in condensed matter physics, in energy and science policy, in service to the scientific community, and in mentoring women in the sciences; and the prestigious Kavli Prize for her pioneering contributions to the study of phonons, electron-phonon interactions, and thermal transport in nanostructures. She was also an elected member of the National Academy of Sciences and the National Academy of Engineering.

Always an active and vibrant presence at MIT, Dresselhaus remained a notable influence on campus until her death. She continued to publish scientific papers on topics such as the development of 2-D sheets of thin electronic materials, and played a role in shaping MIT.nano, a new 200,000-square-foot center for nanoscience and nanotechnology scheduled to open in 2018.

In 2015, Dresselhaus delivered the keynote address at “Rising Stars in EECS,” a three-day workshop for female graduate students and postdocs who are considering careers in academic research. Her remarks, on the importance of persistence, described her experience studying with Enrico Fermi. Three-quarters of the students in that program, she said, failed to pass rigorous exam requirements.

“It was what you did that counted,” Dresselhaus told the aspiring scientists, “and that followed me through life.”

Dresselhaus is survived by her husband, Gene, and by her four children and their families: Marianne and her husband, Geoffrey, of Palo Alto, California; Carl, of Arlington, Massachusetts; Paul and his wife, Maria, of Louisville, Colorado; and Eliot and his wife, Françoise, of France. She is also survived by her five grandchildren — Elizabeth, Clara, Shoshi, Leora, and Simon — and by her many students, whom she cared for very deeply.

Gifts in her memory may be made to MIT.nano.

The late Institute Prof. Emerita Mildred Dresselhaus is featured on MSNBC Live with Velshi & Ruhle’s “Monumental Americans” series, which highlights Americans they believe should be honored with a statue. “Known as ‘the Queen of Carbon Science,’ the electrical engineer worked at MIT for 57 years and was a pioneer for women in science leadership positions.”

Clive Cookson of the Financial Times spotlights the work of Institute Professor Emerita Mildred Dresselhaus, who died at 86. Known as the “Queen of Carbon,” Dresselhaus’ research “led the way to round molecules with 60 carbon atoms, known as fullerenes or buckyballs, and ultimately to graphene,” explains Cookson.

Wall Street Journal reporter James Hagerty spotlights Institute Professor Emerita Mildred Dresselhaus’ pioneering work in thermoelectric materials and as an advocate for women in science. Prof. Pablo Jarillo-Herrero says that Dresselhaus, who died on February 20th, was also known for helping struggling students. “She was always able to see the best in you and bring it out.”

NPR reporter Colin Dwyer writes about the life and work of Institute Professor Emerita Mildred Dresselhaus, who died at 86. Dwyer writes that “during her celebrated career, she sought to prepare a path for potential successors — the female scientists whom she mentored and opened doors for across decades.”

New York Times reporter Natalie Angier memorializes the life and work of Institute Professor Emerita Mildred Dresselhaus, affectionately nicknamed the “Queen of Carbon” for her pioneering research into the fundamental properties of carbon. Angier notes that Dresselhaus was also “renowned for her efforts to promote the cause of women in science.”

Institute Prof. Emerita Mildred Dresselhaus, known for her work deciphering the secrets of carbon, died at 86, reports Bryan Marquard for The Boston Globe. Dresselhaus’ granddaughter Leora Cooper, an MIT graduate student, explained that by being a role model for women in STEM, “she encouraged me to not just see the changes that needed to be made, but to start making them.”

Institute Professor Emerita Mildred Dresselhaus, who was known as the “queen of carbon science” and was an advocate for women in STEM, died at 86, reports Mark Anderson for IEEE Spectrum. Dresselhaus “pioneered the study of carbon nanostructures at a time when studying physical and material properties of commonplace atoms like carbon was out of favor.”

Letter to the MIT community regarding the death of Mildred Dresselhaus

In it for the long run