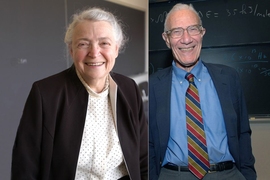 Institute Professors Mildred Dresselhaus and Robert Solow are among 19 new winners of the Presidential Medal of Freedom, the nation’s highest civilian honor.

The honors were announced today by President Barack Obama. Dresselhaus and Solow, both of whom are Institute Professors Emeritus, will receive the awards at a White House ceremony on Nov. 24.

“I look forward to presenting these 19 bold, inspiring Americans with our nation’s highest civilian honor,” Obama said in a White House announcement.

The Presidential Medal of Freedom is presented to individuals who have made especially meritorious contributions to the security or national interests of the United States; to world peace; or to cultural or other significant public or private endeavors.

“From activists who fought for change to artists who explored the furthest reaches of our imagination; from scientists who kept America on the cutting edge to public servants who help write new chapters in our American story, these citizens have made extraordinary contributions to our country and the world,” Obama said.

"Millie Dresselhaus and Bob Solow have been recognized with extraordinary professional honors in their respective fields, including the rank of Institute Professor Emeritus, the highest distinction granted by the MIT faculty," MIT President L. Rafael Reif said. "But the Presidential Medal of Freedom is different: In receiving it, Millie and Bob demonstrate that their approach to scholarship — bold, rigorous, highly creative, and actively applied to the problems of the world — represents citizenship in the highest sense. We could not be more grateful for all they have given us, and the world, as scholars, teachers, colleagues, and friends."

The White House called Dresselhaus “one of the most prominent physicists, materials scientists, and electrical engineers of her generation. … She is best known for deepening our understanding of condensed matter systems and the atomic properties of carbon, which has contributed to major advances in electronics and materials research.”

“Robert Solow is one of the most widely respected economists of the past 60 years,” the White House said of the MIT economist, who received the Nobel Prize in economics in 1987. “His research in the 1950s, 1960s, and 1970s transformed the field, laying the groundwork for much of modern economics. He continues to influence policymakers, demonstrating how smart investments, especially in new technology, can build broad-based prosperity, and he continues to actively participate in contemporary debates about inequality and economic growth.”

Atmospheric chemist Mario Molina, an Institute Professor Emeritus who was on the faculty of the Department of Earth, Atmospheric and Planetary Sciences from 1989 to 2006 before moving to the University of California at San Diego, won the Presidential Medal of Freedom last year. The late Harold "Doc" Edgerton, then a professor of electrical engineering, won the honor in 1946 for his contributions to the American victory in World War II — specifically, for advances in night aerial photography that were crucial to the success of the Normandy invasion.

In addition to Dresselhaus and Solow, the other new Presidential Medal of Freedom recipients announced today are:

In the first of a series of conversations, Professor Emeritus Robert Solow speaks with Paul Solman of PBS NewsHour about the past week’s economics news. Solow and Solman discuss recent fluctuations in the stock market, Federal Reserve interest rates and the response to the Greek debt crisis.

Presidential Medal of Freedom recipient Prof. Mildred Dresselhaus speaks with Julianna Goldman of CBS Evening News about her career at MIT and what continues to inspire her to come to work seven days a week. "Every year there's something new that comes along that's too exciting to quit," says Dresselhaus.

Professor Mildred Dresselhaus speaks with NPR’s Audie Cornish about receiving the Presidential Medal of Freedom. Cornish explains that Dresselhaus got her nickname, the Queen of Carbon, based on her work with carbon, which “paved the way for the rise of nanotechnology.”

David Jackson of USA Today writes about the recipients of the Presidential Medal of Freedom, including two MIT honorees, Institute Professors Mildred Dresselhaus and Robert Solow. Dresselhaus was honored for “deepening our understanding of condensed matter systems and the atomic properties of carbon,” while Solow was recognized for “laying the groundwork for much of modern economics.”

Nidhi Subbaraman of BetaBoston writes that Institute Professor Mildred Dresselhaus has been honored with a Presidential Medal of Freedom. Subbaraman explains that Dresselhaus conducted early research into the electric properties of graphite, “and her work led to the discovery of graphene, the atom-thin carbon sheets that are expected to revolutionize the way we work with electronics.”

Science reporter Vijaysree Venkatraman speaks with Presidential Medal of Freedom recipient Professor Mildred Dresselhaus about her career, in particular what it was like to be a female professor in a male-dominated field. Her advice for other women aspiring to work in academia: “Don’t give up.”

3 Questions: Robert Solow on the struggle ahead