Caption:
Asu Ozdaglar, head of the department of electrical engineering and computer science (EECS) and the Joseph F. and Nancy P. Keithley Professor of EECS, introduces the Mildred S. Dresselhaus Lecture as a new series to a crowd of MIT students, staff, faculty, and guests.
Credits:
Photo: Justin Knight

Functional, intelligent robots the size of a single cell are within reach, said Cornell University Professor Paul McEuen at the inaugural Mildred S. Dresselhaus Lecture at MIT on Nov. 13.

“To build a robot that is on the scale of 100 microns in size, and have it work, that’s a big dream,” said McEuen, the John A. Newman Professor of Physical Science at Cornell University and director of Kavli Institute at Cornell for Nanoscale Science. “One hundred microns is a very special size. It is the border between the visible and the invisible, or microscopic, world.”

In a talk entitled “Cell-sized Sensors and Robots” in front of a large audience in MIT’s 10-250 lecture hall, McEuen introduced his concept for a new generation of machines that work at the microscale by combining microelectronics, solar cells, and light. The microbots, as he calls them, operate using optical wireless integrated circuits and surface electrochemical actuators. 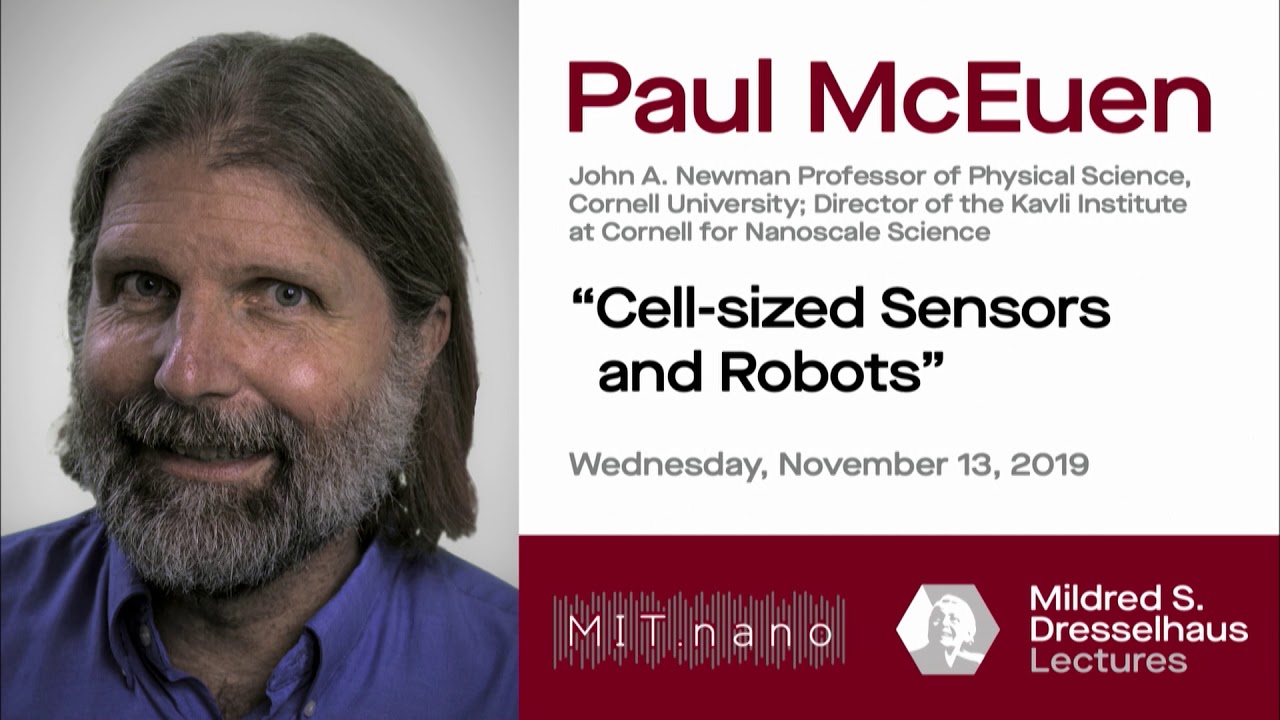 Kicking off the Dresselhaus Lectures

Inaugurated this year to honor MIT professor and physicist Mildred "Millie" Dresselhaus, the Dresselhaus Lecture recognizes a significant figure in science and engineering whose leadership and impact echo the late Institute Professor's life, accomplishments, and values. The lecture will be presented annually in November, the month of her birth.

Her research into the fundamental properties of carbon earned her the nickname the “Queen of Carbon Science.” She was also nationally known for her work to develop wider opportunities for women in science and engineering.

“Millie was a physicist, a materials scientist, and an electrical engineer; an MIT professor, researcher, and doctoral supervisor; a prolific author; and a longtime leader in the scientific community,” said Asu Ozdaglar, current EECS department head, in her opening remarks. “Even in her final years, she was active in her field at MIT and in the department, attending EECS faculty meetings and playing an important role in developing the MIT.nano facility.”

Pushing the boundaries of physics

McEuen, who first met Dresselhaus when he attended graduate school at Yale University with her son, expressed what a privilege it was to celebrate Millie as the inaugural speaker. “When I think of my scientific heroes, it’s a very, very short list. And I think at the top of it would be Millie Dresselhaus. To be able to give this lecture in her honor means the world to me.”

After earning his bachelor’s degree in engineering physics from the University of Oklahoma, McEuen continued his research at Yale University, where he completed his PhD in 1990 in applied physics. McEuen spent two years at MIT as a postdoc studying condensed matter physics, and then became a principal investigator at the Lawrence Berkeley National Laboratory. He spent eight years teaching at the University of California at Berkeley before joining the faculty at Cornell as a professor in the physics department in 2001.

“Paul is a pioneer for our generation, exploring the domain of atoms and molecules to push the frontier even further. It is no exaggeration to say that his discoveries and innovations will help define the Nano Age,” said Vladimir Bulović, the founding faculty director of MIT.nano and the Fariborz Maseeh (1990) Professor in Emerging Technology.

“The world is our oyster”

McEuen joked at the beginning of his talk that speaking of technology measured in microns sounds “so 1950s” in today’s world, in which researchers can manipulate at the scale of nanometers. One micron — an abbreviation for micrometer — is one millionth of a meter; a nanometer is one billionth of a meter.

“[But] if you want a micro robot, you need nanoscale parts. Just as the birth of the transistor gave rise to all the computational systems we have now,” he said, “the birth of simple, nanoscale mechanical and electronic elements is going to give birth to a robotics technology at the microscopic scale of less than 100 microns.”

The motto of McEuen and his research group at Cornell is “anything, as long as it’s small.” This focus includes fundamentals of nanostructures, atomically-thin origami for metamaterials and micromachines, and microscale smart phones and optobots. McEuen emphasized the importance of borrowing from other fields, such as microelectronics technology, to build something new. Cornell researchers have used this technology to build an optical wireless integrated circuit (OWIC) — essentially a microscopic cellphone made of solar cells that power it and receive external information, a simple transistor circuit to serve as its brain, and a light-emitting diode to blink out data.

Why make something so small? The first reason is cost; the second is its wide array of applications. Such tiny devices could measure voltage or temperature, making them useful for microfluidic experiments. In the future, they could be deployed as smart, secure tags for counterfeiting, invisible sensors for the internet of things, or used for neural interfacing to measure electrical activity in the brain.

Adding a surface electrochemical actuator to these OWICs brings mechanical movement to McEuen’s microbots. By capping a very thin piece of platinum on one side and applying a voltage to the other, “we could make all kinds of cool things.”

At the end of his talk, McEuen answered audience questions moderated by Bulović, such as how do the microbots communicate with one another and what is their functional lifespan. He closed with a final quote from Millie Dresselhaus: “Follow your interests, get the best available education and training, set your sights high, be persistent, be flexible, keep your options open, accept help when offered, and be prepared to help others.”

Nominations for the 2020 Dresselhaus lecture can be submitted on MIT.nano’s website. Any significant figure in science and engineering from anywhere in the world may be considered.